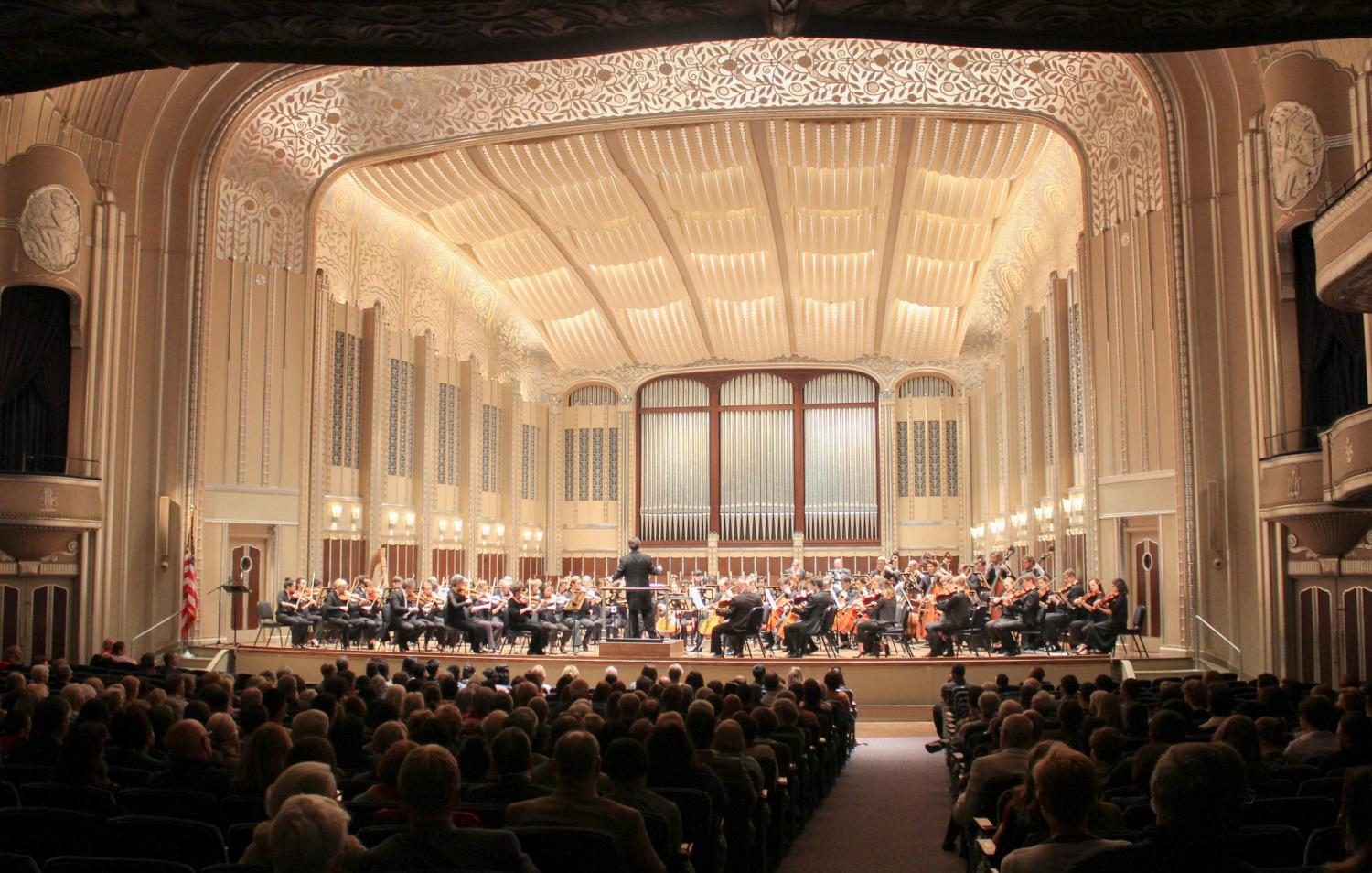 In the wake of the two major hurricanes that have impacted the mainland United States over the past few weeks, communities across the nation have rallied to provide support to those affected. Friday night, students from Oberlin Conservatory joined with the Cleveland Orchestra, the Cleveland Institute of Music, and Credo Music to put on a benefit concert to raise money to support the American Red Cross’ relief efforts in Texas and Florida. The concert — titled “Help After Harvey,” though the funds raised will support relief efforts for areas affected by both Hurricane Harvey and Hurricane Irma — was held in Cleveland’s Severance Hall and conducted by James Feddeck, OC ’05, who also completed his graduate training at Oberlin. The newly-minted ensemble performed a wide-ranging, uplifting program, consisting of the national anthem, Aaron Copeland’s Fanfare for the Common Man, John Williams’ The Cowboys Overture, Louis Panella’s American Red Cross March, Samuel Barber’s Adagio for Strings, and Igor Stravinsky’s Firebird Suite.

Peter Slowik, who is a professor of viola in the Conservatory and founder and artistic director of Credo Music, as well as a performer on Friday night, said that the program was strategically chosen so that it could be executed on short notice.

“The Barber Adagio, many string players have played; Fanfare for the Common Man, many brass players have played; John Williams writes music that goes together really well — it’s very appealing to people, but it’s also well-crafted; the national anthem, everybody knows,” Slowik said. “Nobody had ever seen the Red Cross March. We didn’t even know there was a Red Cross march, but … it’s a march, so that’s pretty easy to put together, too. The big thing was the Firebird, which is not an easy piece to put together. It’s not something you do on one rehearsal.”

Despite the challenging nature of Firebird, Feddeck was inspired to include it in the program because the Russian folklore that the piece draws from struck him as particularly apt for the moment.

“[It] seemed especially fitting, not only because of the artistic virtuosity required, but because of the symbolism that the firebird represents,” Feddeck wrote in an email to the Review. “In folklore, the firebird has a certain mystical quality and represents all that is good. Even with the ensuing conflicts of the story, the musical theme of the firebird returns, ultimately stronger than ever, for that all-encompassing work of good.”

At the end of the concert on Friday night, the thousand-strong audience rose in a sustained standing ovation, applauding the execution of the concert program along with the performance’s laudable cause. Andrea Kalyn, dean of the Oberlin Conservatory, was deeply impressed with how Oberlin was represented on stage.

“[The students who performed] played beautifully,” she said. “They all played with great heart. They acquitted themselves with incredible professionalism. I know that the orchestra members and [conductor] James Feddeck were just thrilled with them, and I was very, very proud of them all — not just for the way that they played, but for the fact that they wanted to be there and for the heart that they brought to it.”

For some musicians, this was a deeply personal performance because the storms have affected their friends, family, or loved ones.

“The feeling of purpose I experienced during that concert was humbling; I was participating in music, which is already so much greater than I could ever be, for a cause that is so much more than I alone could ever tackle, but I helped make a visible difference,” Conservatory junior Hannah Price, who played the violin in the concert, wrote in an email to the Review. “I’m from Dallas, so this concert was close to home — literally.”

Conservatory junior Erica Ogihara, who played cello in the concert and has family members in Florida, said that her participation in the benefit concert became more personal as more news emerged about Hurricane Irma’s trajectory and severity.

“It was very scary,” Ogihara said. “All through the rehearsals, I just couldn’t stop thinking about my family. Obviously, the concert meant so much to me, but as the week went on it started meaning even more to me, because I thought that maybe the money we were raising for the Red Cross could potentially go to my family, if something happened to them. I felt it so personally.”

Even musicians who were not affected personally by the storms chose to donate their time to the performance because of the impact that the raised funds would have.

“Playing music can sometimes feel like a very self-centered thing to do, and playing for a bigger reason than myself was an amazing opportunity,” said double-degree sophomore Jane Larson, who played the viola.

“This was a unique opportunity to perform music for something that was more than just music,” agreed Conservatory senior Toby Elser, who played the violin. “There was another goal in mind.”

To Slowik, Conservatory students’ eagerness to contribute their talents was unsurprising.

“Oberlin students being what they are, it was a no-brainer for them to be involved with helping people in need,” he said. “That’s just natural.”

The drive to put on the benefit concert was spearheaded by Credo Music, a local organization that considers service to be an integral part of its mission.

“Anybody that played on that stage could also go down to Houston or Key West and serve in a shelter, or make meals,” Slowik said. “We could do that. But we also have this special thing, which we do better than anyone else, and you couldn’t just take a random 85 people off the street and make that concert. I think, when everyone in a society brings their best gift to situations of need, then society is best served.”

Beyond the immediate goal of the evening, Friday night’s benefit concert also highlighted further opportunities for musical collaboration in the region.

“[This] was the first time that anybody can remember that the [Cleveland Institute of Music], Oberlin, and the Cleveland Orchestra came together for something, which is astounding because we should do it more,” Slowik said.

Students from affected areas were pleased to see that even though the hurricanes are not in close physical proximity to Oberlin, the musical community still rallied in support.

“I was grateful to see people come out and want to do something for that kind of relief,” said College senior Emma Davey, whose family is from Houston. “Even though my house was okay, we didn’t flood, we didn’t lose power, to see all the destruction that happened around where I live was hard to watch from afar. It was nice to know that there are people at Oberlin who care about that.”

According to Michelle Pincombe, OC ’09, the operations manager for Credo Music, the concert raised at least $24,000 for the Red Cross. The Northeast Ohio chapter of the Red Cross was in attendance at the benefit concert, and spoke about the impact that this money will have on their relief efforts.

“The musicians from the Cleveland Orchestra, the Cleveland Institute of Music, and the Oberlin Conservatory, along with Credo Music, are all donating their time,” said Jim McIntyre, communications officer for the Red Cross of Northeast Ohio. “There are people in Texas and Florida who may be able to stay in a safe, dry shelter and have three warm meals a day because of the generosity of the donors who are here tonight.”