On the Record with Robert Spano, OC ’84 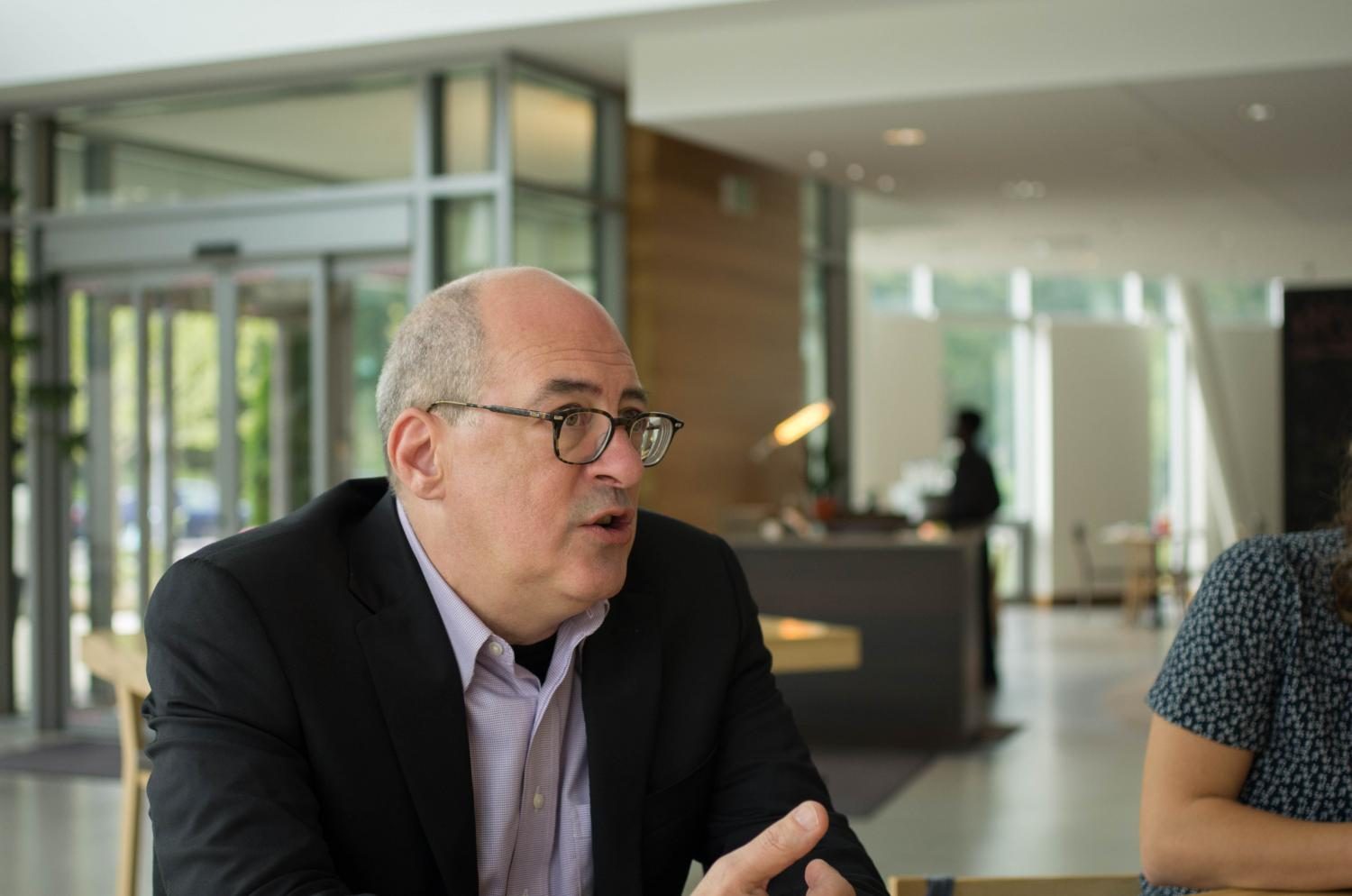 Professor Robert Spano, OC ’84, renowned conductor and director of the Atlanta Symphony Orchestra, gave the Convocation address on Thursday night with a focus on the “State of the Art.”

Professor of Conducting Robert Spano, OC ’84, delivered the Convocation on Thursday night, a moderated Q&A session with Dean of the Conservatory, Andrea Kalyn. Spano is currently in his 17th season as music director of the Atlanta Symphony Orchestra, which has won six Grammy awards under his leadership. In 2012, Spano was inducted into the Georgia Music Hall of Fame, one of only two classical musicians to achieve that distinction. He has made guest conducting appearances with the Cleveland Orchestra, Philadelphia Orchestra, Chicago Symphony Orchestra, Los Angeles Philharmonic, Orchestra Filarmonica della Scala (Milan), Ensemble Intercontemporaion (Paris), Welsh National Opera, Houston Grand Opera, and the Royal Opera at Covent Garden.

In your career, you’ve won multiple Grammys and directed a premier orchestra for seventeen years. How did your time as an Oberlin student prepare you for a music career in the real world?

I think, in so many ways, my musical aesthetic, taste, passions, [and] interests were formed here. I did go on to more school after this, and of course I hope I haven’t stopped developing, but Oberlin was so formative to how I approach music. And then I taught here for years after I was a student, so the place has even more resonance in my life. I feel that it’s a foundation for the way I approach music and I think that the education I got here was so helpful … because the place is so caring of the individual. I had friends who went to larger schools and I always felt like my experience here allowed me to develop in a way that was appropriate for me. And I treasure that.

How has the Conservatory changed since you were a student and throughout your time on the faculty?

Well, if nothing else, the physical plant has changed — and for the better, which I think is great. The new wing is fantastic. I was able to record in the new recording studio last year and it’s terrific. I think that buildings can’t make a place, but they can be symbolic of the kind of vibrancy that a place embodies…. I felt very inspired, being in the new recording studio last year. It just speaks to the forward-looking nature of the institution and the continued growth and aspiration, and that’s pretty exciting.

What do you feel has informed your own choices in music, as the director of an orchestra? Why do you make certain choices about what to play, and how do you approach that?

With a big institution like the Atlanta Symphony Orchestra, the mission is varied. Often, we talk about audience, but in fact there is not a [singular] audience. There are many audiences and they’re looking for different things — they have different expectations, different appetites, different tastes. We try, as a big institution, to serve many audiences. So we have various kinds of series, we have different programmatic content for different series, we have within a given series even more programmatic variety with the intention of serving as many aspects of our big audience as we can. And it’s really a mission to connect with as many people as we can, as many listeners as we can. On the other hand … we’re also custodians of great art. We’re not exactly a museum, but we’re certainly caring for a history and a tradition of music that we want to preserve and perpetuate into the future, so there’s also that artistic mission. So we’re always at the same time looking at: What are the iconic pieces that need to be performed as part of that living tradition? What are the aspects of that tradition that are less well known, less on the main highway, what are the detours and byways? What’s new, and how is that informed by tradition and where is that taking us? Because it is a living tradition… and then there’s also the health of the performers themselves. We have an amazing chorus — are we providing a musical diet for them that keeps them at the top of their form? Same for the orchestra themselves … so all those things sort of inform the programmatic decisions.

When you’re conducting a performance, what do you hope that your audiences will take away from it?

Something. I think that there are as many experiences of a performance as there are people in the room, because everybody has their own personal experience of whatever happened. The most extreme example is two people leaving a concert and one saying, “Oh that was awful!” and the other one saying, “Really? I thought it was the greatest thing I’ve ever heard” — those are the two ends of the spectrum, but then there’s everything in the middle too. I think that as a performer it’s important to put something out there and allow people to have whatever experience they have with it.

In line with that, what would you say is the value of music for you? Why make music?

There was a cartoon in The New Yorker, probably twenty years ago by now, that pictured a crushed beer can and a tumbleweed in a deserted landscape, and underneath it said, “Life without Mozart.” And I think that life without music just wouldn’t be worth it.

How has your perspective on the music world changed over the past seventeen years at the head of the Atlanta Symphony Orchestra?

I think earlier in my life I thought of these institutions as a given … earlier [in your] career, you’re trying to find your way into fitting into that larger world, find your place in it, find your way to your own success. And then at a certain point something shifts — especially when you’re running an institution for seventeen years — and you realize these things are not a given. These are things that require our collective constant attention and nourishment and care for them to be there. It’s easy to take them for granted, when in fact they have to be constantly recreated and constantly reborn, and they won’t be there without our investment.

In terms of rebirth, what’s the most intriguing innovation to you in the music world today?

This is not new, but I think there’s a new aspect to it these days which is: what’s high culture and what’s low culture? What’s pop? What’s classical? Because what’s happening in music is [that] so many diverse styles are meeting and joining and creating creoles and pidgins and fantastic new sound worlds… because music is not a universal language. We’d like to think it is at some emotional level, but if you go to classical Chinese opera, it’s very hard to follow it as a Western listener. It takes time to acquaint oneself with any particular musical language and things we take for granted as being familiar aren’t so out of another cultural sound landscape, so as these things meet, to me it’s very exciting. It’s not new — I mean, Mozart wrote Turkish music, Debussy was influenced by gamelan that he heard at the World Exposition in Paris, but it’s new at the level that it’s happening now, I think.

In terms of your teaching career, what is most important to you? And if students were to learn only one thing, what would you hope that thing would be?

I always feel like my mission if I’m in a teaching situation is to help the people I’m working with better be able to teach themselves. To try and help them find the skills or the perspective or the insight they need to develop the next thing that’s important in their development. … I mean at a certain level, yes there are things that you want to pass on, on a technical level or on a foundational level, but in the end no one really understands anything unless they’ve seen it for themselves. Unless the lightbulb goes off for themselves. You can’t really give someone knowledge. You can give them information, but the understanding has to come from one’s own experience and so as a teacher you’re really trying to facilitate or find that key that’s gonna help someone get something for themselves that they didn’t yet figure out. For me that’s always the most exciting challenge because everybody’s different, so what’s going to make that lightbulb go on is always what’s interesting to me.