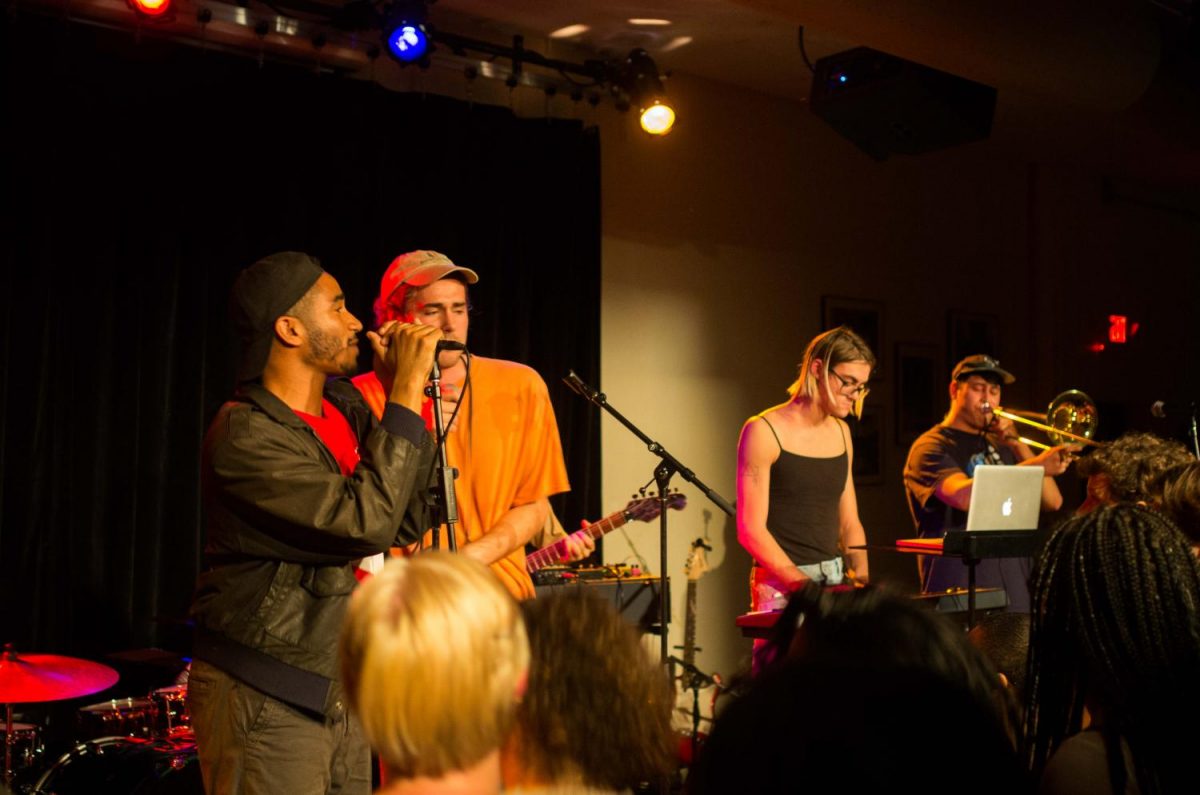 Student band Bémbe opens for Xenia Rubinos, who played an energetic, powerful show at the Cat in the Cream Saturday night.

Forget casually strolling in at 8 p.m. — if you arrived any later than 7:40 p.m. to the Cat in the Cream last Saturday, you had to follow the line of over 100 people down the hall, around the corner, down a flight of stairs, and straight into the bathroom spaces. Eager Xenia Rubinos fans began lining up at the doors as early as 7:20 p.m. and flooded the space when it finally opened, filling it to capacity within minutes. Energetic conversations made for a bright ambience to start off what would be a night of great music and musicians.

Student band Bémbe opened the concert, taking the stage to excited shouts and enthusiastic applause. College senior and frontman Justin Jiménez introduced the members of the group after their first number: College seniors Tom Morrison on vocals, Daniel Thin on bass, Daniel Gonzales on trombone, and Andrés González on electric guitar; College junior Joanna Quinn on drums; and Conservatory senior Jane Lincoln on keyboard. With a blend of easygoing and upbeat rhythms, led by a powerful opening sound from González on electric guitar, the second song in their set, “Move-In Day,” had the audience nodding their heads and jumping around the cleared space in front of the stage.

“I think they did a great job; I think they set it up really well,” said College junior Hanne Williams-Baron, the manager at the Cat in the Cream who booked the concert. “I think that they’re a little jumpier band, which was really good.”

Rubinos chose Bémbe to open the show from a pool of several other student bands, which González said felt very affirming.

“We’ve worked on this music for such a long time — for two years at least — so to have someone to kind of validate it in that way, or confirm what we think about it was really, really exciting and we were really happy about how it went,” González said. “I think that Xenia Rubinos is … someone with so much force, and personality, and passion, and excitement, and that’s totally, I think, a lot of what Bémbe is about too.”

After a pause between bands, Rubinos took the stage, immediately launching into the mellow opening chords of “Lonely Lover,” from her 2016 album Black Terry Cat. A Brooklyn-based artist of Puerto Rican and Cuban heritage with a powerful voice, Rubinos resists labels for her music — especially the label of “Latin” music — and for good reason.

“The reason why I get upset by this [labeling] is because it leads people to assume things about me and it also … really cuts me short and makes me feel like someone is exclusively looking at my face and my name and saying, ‘Oh, she makes Latin music,’ — like all Latinas make Latin music, that’s all you do,” Rubinos said. “That’s infuriating on many levels.”

It’s an understandable frustration, especially since her music isn’t particularly based in Latin rhythms. Williams-Baron personally described Rubinos’ sound as “Afro-Caribbean punk R&B,” which is how she advertised the event.

Regardless of genre labels, it is undeniable that Rubinos’ vibrant energy was hard to resist as she bounced around the stage, launching into piece after piece almost nonstop for the duration of her hour-long set.

“I’m here to dance with you,” she enthused, at one point coming down off of the raised platform to join the willing and eager audience on the floor.

“She has a ton of energy, and I think her stage presence is really special — I watched and admired [that] a lot in her videos of her shows before and I knew that we could really benefit from that because some people still have the idea that the Cat in the Cream is a calm, quiet, folksy space, … and we can be that, but also we can have really energetic ‘jumping around and dancing in the audience’ shows, too,” Williams-Baron said.

Rubinos has said that she is not a fan of the terms “protest” or “political artist” to describe her work or musicianship either, explaining, “I’m just talking about real shit that’s happening around us.” Williams-Baron echoed a similar sentiment.

“It’s going to be resistance,” Williams-Baron added. “She’s going to be labeled that just by virtue of the spaces that she’s dominating or that she’s interrupting — but I think her music is joyous and silly and sexy and all these other things, in addition to being really powerful and resistant.”

As Rubinos picked up the bass and ended her set on a blazing note with the pointed lyrics of “Mexican Chef” — “Brown breaks his back, brown takes the flack, brown gets cut ‘cos his papers are whack / … Brown has not, brown gets shot, brown got what he deserved ‘cos he fought” — it is clear that those who put Rubinos in a limiting box, whether “Latin” or “protest,” are mistaken in doing so. Her music is entirely and fiercely her own.