New Series Explores Pathways in Past and Future Artistic Careers 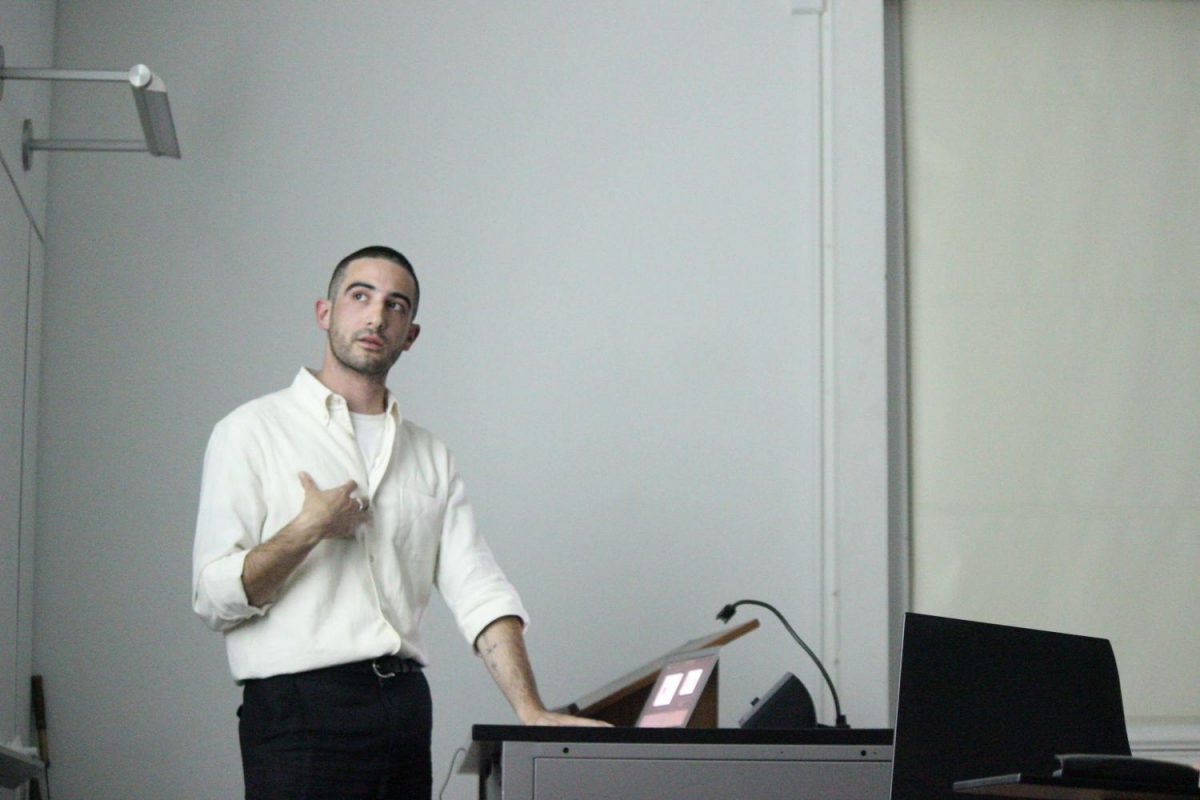 Lucas Briffa, OC ’12, returned to Oberlin to give a film screening on Sunday and a talk on Monday as part of the Pathways 2017 series.

The Pathways 2017 series, which the Art department debuted this year to bring recent alumni back to campus to speak to current art students about the trajectories that their lives and careers have taken since graduation, had a strong launch. Last Sunday and Monday, two recent Art department alumni returned to campus and gave firsthand accounts of what they have done post-college, and more alumni will be giving talks later in the year. In conjunction with the Art department’s Senior Studio and Thesis’ goal of equipping majors with the skills they need to begin a professional life, the Pathways 2017 series is intended to provide a glimpse of what could be expected post-graduation.

Studio Art Professor Nanette Yannuzzi-Macias, one of the event’s organizers, was hopeful that bringing Art department alumni to campus would help students realize that an Oberlin Art degree can lead to many different life and career outcomes, as well as answer some of their questions.

“We’re hoping that the insights from our alums help current students towards the same kind of trajectories,” Yannuzzi-Macias said. “How did they take their first steps? What was helpful, as an artist? Most [graduating seniors] are not actually walking out into a job — they’re doing residencies, they’re writing grants, they’re going to certain cities. [Students] are trying to figure out how that works and what happens when you leave Oberlin.”

Participating in Pathways 2017 was an especially interesting experience for the returning alumni, as they did not have any comparable events or series during their undergraduate years.

“We had professional artists come and do artist talks and studio visits, but we didn’t have really any communication with alumni,” said Lily Dithrich, OC ’13, one of the returning artists who spoke Sunday. “There wasn’t any sort of infrastructure for speaking with past art students and seeing what they were up to.”

The other visiting alumnus, Lucas Briffa, OC ’12, noted that if an opportunity like Pathways had existed during his time at Oberlin, he would have “definitely been trying to get studio visits with the visiting artists. … Looking back on it now, it’s one of the most important things, obviously, to do.”

Dithrich and Briffa’s talks were as creative and varied as the artists themselves. Dithrich spoke about how her sculpture practice examines “both inter- and intrapersonal relationships using reassembled furniture parts that serve as mimeses for human subjects.” One piece, titled “Being Two, Being One,” incorporates the frames of two chairs that seemed almost to melt together because of the creative woodworking. Dithrich’s talk embodied an important aspect of the Pathways 2017 series — exploring how the senior studio course helps students in “building a body of work and a body of skills that help them ease their way into a professional life as artists, or whatever path they choose,” as Professor of Integrated Media Julia Christensen described. Dithrich described how her work evolved since her senior studio, still incorporating many of the elements that were characteristic of her undergraduate work, but also adding new ones, like color and wood bending.

“As I distort objects through form, color, and material, the viewer must examine the destabilization caused by this and reflect on their reliance on and expectations of the things around them,” Dithrich said.

Briffa’s Monday lecture showed an artist who had taken a very different pathway, using film, photography, and found objects as his media of choice. One piece displayed objects that he had collected from the Chicago Police department, including a disturbing badge that read at the top, “Chicago Police Death Squad” and, at the bottom, “Kill or be killed.”

“I definitely try to raise awareness around authority and the authoritative tone. I think one of the things that I’m pretty interested in is the way authority operates, to what extent it’s useful, and to what extent it’s oppressive,” Briffa said. “ … For me, as an artist who has not really gotten a lot of funding, accomplishing these projects has been kind of a miracle.”

“Everybody does choose a different pathway,” Dithrich said, speaking to what she wants students to take away from the series. “There are a lot of different ways to be an artist right now.”

“If there’s anything that a student at Oberlin should do, it’s really just to expand those horizons,” Briffa added.

Yannuzzi-Macias was hopeful that current students would benefit by learning from the experiences of recent graduates who have navigated the post-Oberlin world before them.

“[I hope our students] will really take to heart the advice, the words, the experiences of the alums, and really embrace that, ask a lot of questions, and use the opportunity,” she said.