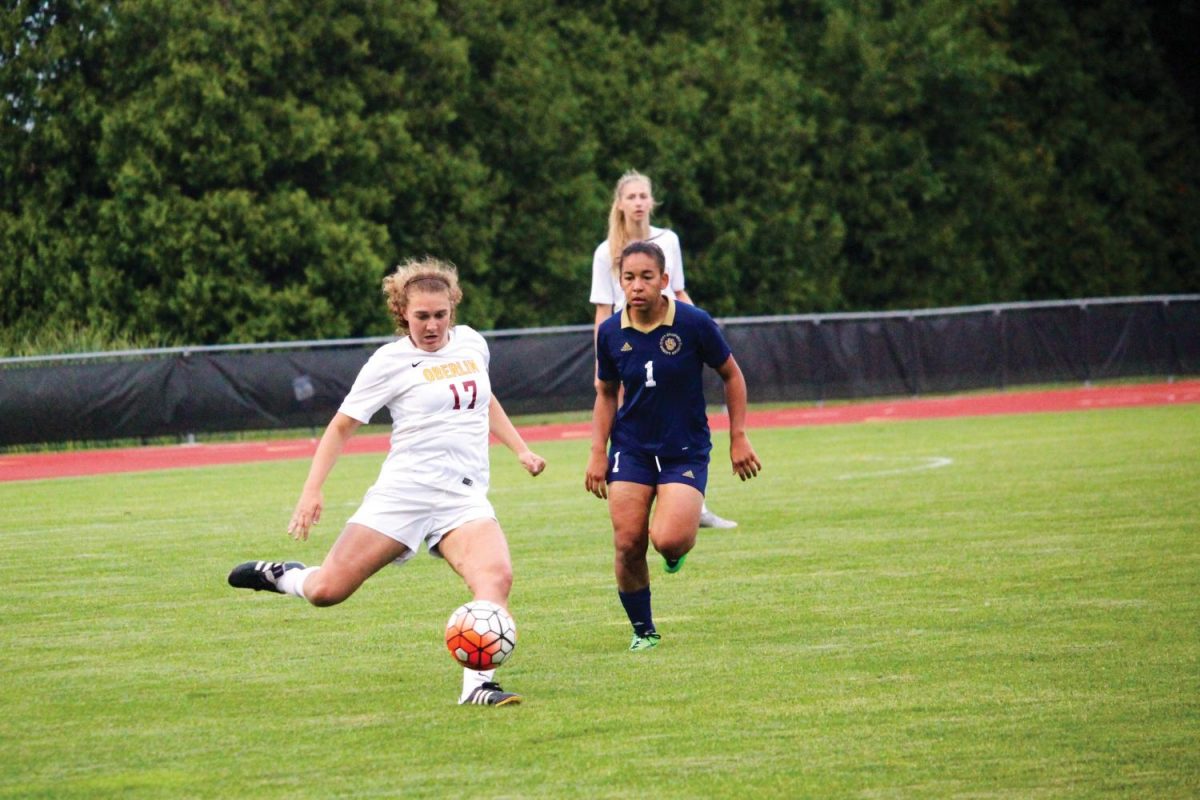 Senior defender Lauren Koval rifles the ball past the University of Pittsburgh at Bradford Panthers’ defense in their 4–0 win Sept. 1. The Yeowomen, who are 6–0–1, start conference play against Ohio Wesleyan University tomorrow at 3 p.m. at Fred Shults Field.

The Yeowomen’s electric start came to a halt when they were handed their first non-victory at the hands of the Heidelberg University Student Princes Wednesday. While the 0–0 draw may have ended their win streak, the team still has plenty to be excited about as senior forward and United Soccer Coaches National Player of the Week Gwennie Gardiner has led their offense to outscore opponents 32–2 through their first seven games.

Anticipating the team’s first North Coast Athletic Conference match tomorrow, Gardiner is confident her team will continue playing at the extraordinary level it has so far.

“This is the best team I’ve seen in my four years here,” Gardiner said. “As long as we play like we did in the game against Baldwin Wallace [University], we have a shot at winning every conference game we play.”

Compared to the Yeowomen’s high-scoring matches against Geneva College and Defiance College, their game against Heidelberg University was slow by Oberlin standards. While the Yeowomen had more control over the ball than their opponents, firing 10 shots on goal compared to Heidelberg’s four, they were not able to put any points on the board. While Gardiner tallied just one shot on goal, sophomore midfielders Izzy Rosenstein and Jackie Brant added three and two more, respectively, but Student Princes goalie Alexandra Farmer was able to block all balls sent her way.

The game against the Marietta College Pioneers on Sept. 15 didn’t pose much competition for the Yeowomen. Gardiner added two goals to her tally during Friday’s match, and the team’s second-highest scorer, first-year Brittany Mendez, added an assist to her point total. The first-year standout has six goals on the year and credits some of her success to the seniors and upperclassmen.

“The seniors have been extremely supportive,” Mendez said. “Not only have they given me soccer advice, but also for everyday college life, which makes the whole transition process a lot easier. If I am ever confused during a drill or have questions after speaking to coach, they are always willing to take time to clarify.”

After only leading 1–0 through the first half, having found few opportunities to score, the Yeowomen were able to capitalize in the second half with goals from Gardiner, Rosenstein, and first-year Lucy Fredell. The defense held the Pioneers to only five shots the entire game, as they cruised to a 4–0 win.

“Although this may sound ambitious, I already hope that the team earns a conference title,” Mendez said. “We have put in a lot of work and our results reflect it. Even though we have played weaker teams thus far, our scoring efficiency has been outstanding and I hope that we continue this trend even against more difficult teams.”

With the team’s astonishing play on offense, the other side of the ball has gone relatively unnoticed, despite being equally dominant. Even junior goalie Jordyn Morris, who is grateful for the goal support she receives each game, gets lost in watching her offense obliterate opponents.

“Although it gets a little boring to be a goalie in games that we are dominating, it is definitely a lot less pressure,” Morris said. “When we’re up by four goals I can relax a little bit and focus more on working on my communication.”

In the midst of the team’s early success, Head Coach Dan Palmer is attempting to balance his excitement with level-headedness, as the season is still less than halfway complete.

“We are playing very well, but our future opponents are stronger than the majority of teams we have played so far,” Palmer said. “We were picked eighth in the preseason poll, so we still have a ways to go. But our goals do include both qualifying for the conference tournament and competing for a conference title.”

The Yeowomen, who enter their first NCAC match with no losses, will face off against rival Ohio Wesleyan University tomorrow at Fred Shults Field.