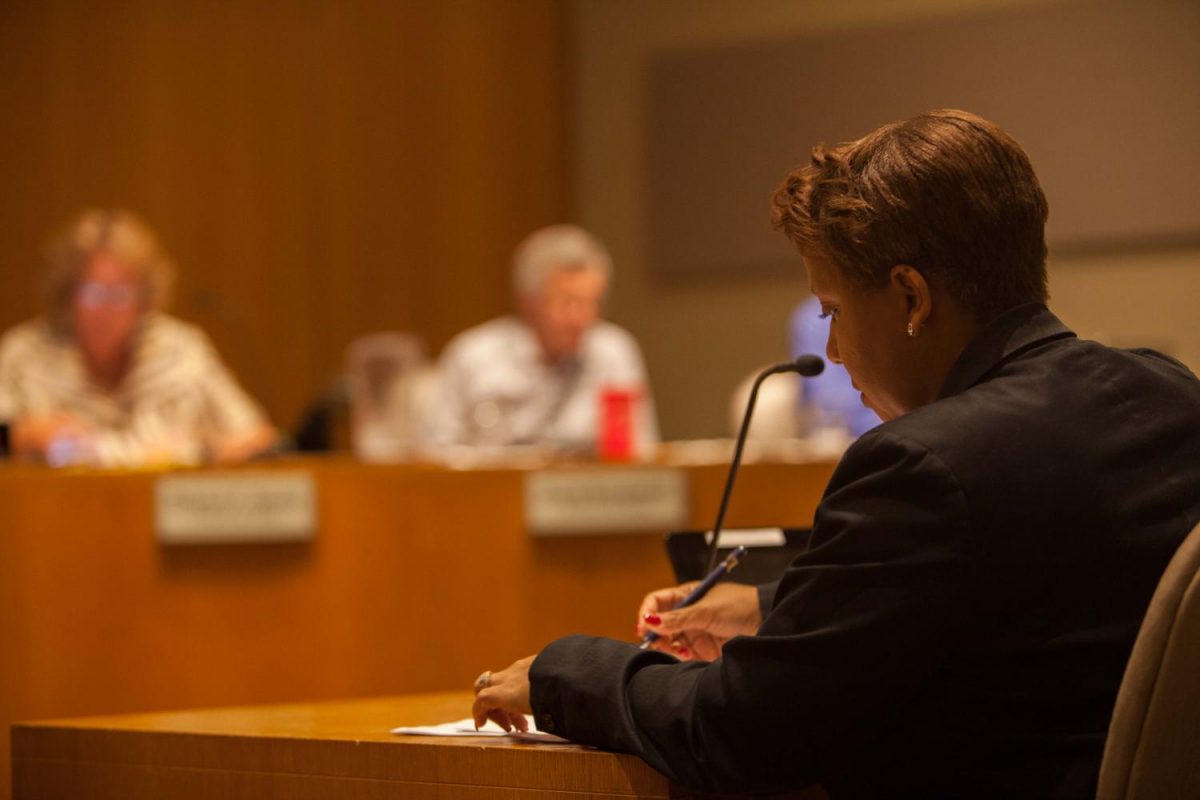 Oberlin City Council Clerk Belinda Anderson at Monday’s City Council meeting, where the council discussed a potential amendment to Oberlin’s City Codes that would give increased rights and protections to LGBTQ community members.

Oberlin is en route to becoming the first city in Lorain County and 20th in the state of Ohio to make discrimination against members of the LGBTQ community illegal.

Ohio is one of 28 states that has yet to do the same. In Oberlin, there are no laws in place to prevent employers from hiring or firing employees based on their gender identity or sexual orientation.

Additionally, Oberlin has no tangible law preventing business owners from denying customers of the LGBTQ community service or access to housing. There are, however, laws that protect residents based upon ethnicity, national origin, sex, ancestry, physical and mental disabilities, and religious affiliation.

A group of activists from Equality Ohio and the city’s Human Relations Commission have been pushing for City Council to make a change. On Monday, City Council unanimously voted to pass the first reading of amendments that will see anti-discrimination provisions include sexual orientation, gender identity, and expression in the city’s Equal Opportunity Employment Program and housing ordinances.

According to Councilwoman Sharon Soucy, the measures have been a long time coming.

“Over time, this has been something that our city has been committed to,” she said. “I think it was [a few years] ago [when] we established a registry for same-sex couples, and that was an indication of our commitment to this sort of concept. Even though at that time the registry had no legal status, it enabled people to come to City Hall to register. They could get a very formal-looking piece of paper, which might help if a same-sex parent wanted to visit a child in the hospital or go to a school conference. I think [the provisions] continue our history, and I am certainly happy to support it.”

Although it has taken several months, Chair of the Human Relations Commission Ray English expressed his satisfaction with the moves City Council is making.

“The Human Relations Commission is fully supportive of these changes, and we believe that this moves us a step forward in implementing the comprehensive recommendations that we made to City Council last spring,” English said.

According to Brian Wilbert, LGBTQ affiliate chaplain of Oberlin College, these basic protections affect more than just members of the community. He expressed concern for students of the College, saying that there aren’t enough laws in place protecting their rights.

Gwen Stembridge of Equality Ohio said it’s an important time to be considering these provisions.

“Attention to this issue is especially needed right now, when rights are under threat at the state and national levels, and misunderstanding leads to ignorant and harmful words close to home,” Stembridge said. “In an age and particularly in a year where so many people in our country are being told that they don’t belong in certain spaces, [these provisions are especially important].”

Co-Pastor of Peace Community Church Steve Hammond applauded the Human Relations Commission and City Council for what they have done thus far, but warned that there is still work to be done.

“We’re moving the ball down the court, but there’s still a goal to be scored here, so keep up that good work,” Hammond said.

Stembridge added that it falls on cities like Oberlin to make a statement to state legislature.

“I urge [City Council] to add those sections of private employment and public accommodations to have [their] code match the welcoming and inclusive culture I know already exists in Oberlin,” Stembridge said. “I look forward to proudly announcing soon that we’ll add Oberlin to the full list of welcoming communities.”

City Council has been busy the past few months, ensuring that Oberlin is “on the right side of history,” Soucy said.

“I think it started with our strengthening and reaffirming our sanctuary city ordinance, which we continued with our vote on the Indigenous Peoples’ Day recognition,” she said. “We passed a resolution that strongly objected to President Trump pulling out of the Paris Climate Accord, and we raised the minimum wage against the protests of our own state government.”

The provisions to the discrimination laws will likely go through a second and third reading before officially being added to the lawbook but, Soucy says, they will ensure that Oberlin continues getting things done at the local level.

“One thing I’ve realized in my time on Council is that the seven of us make these decisions, but the community makes the ultimate decisions,” Council President Ronnie Rimbert said. “We’ve always been on the right side of the history books in this community as far as I’ve ever seen when it comes to human rights.”