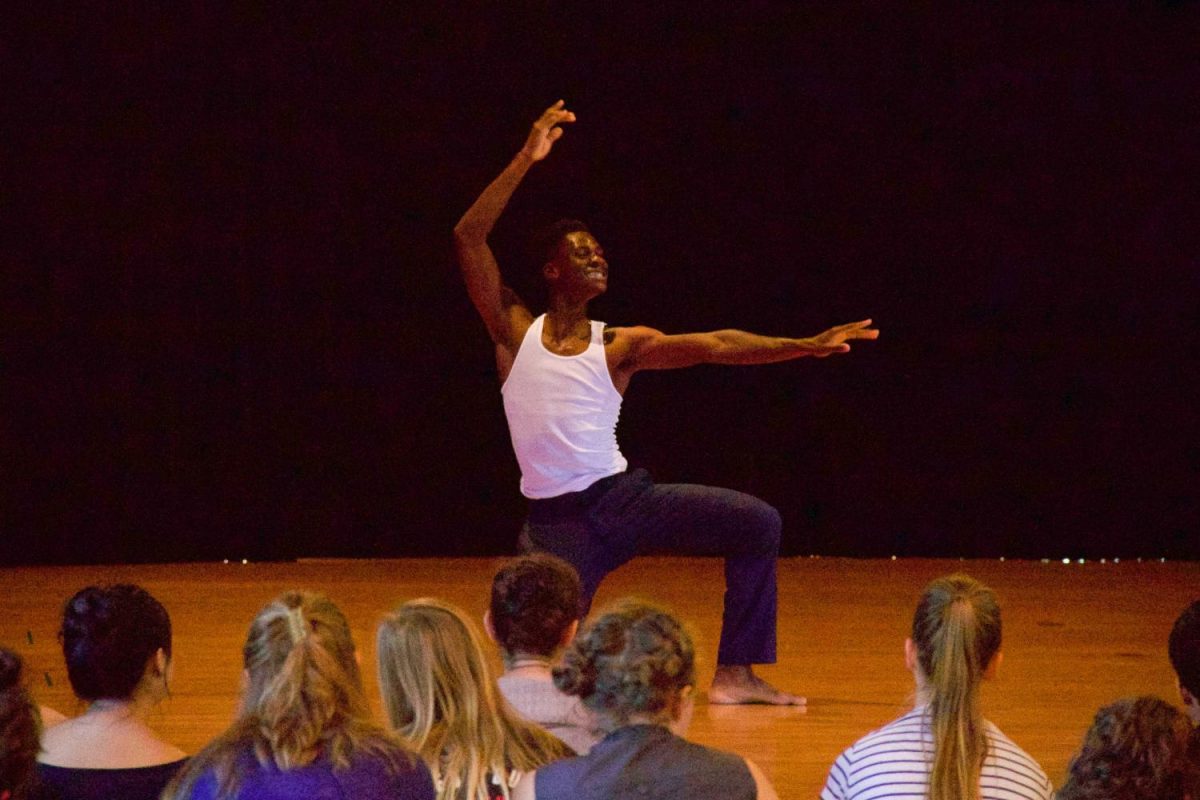 Kweku Bransah performs “The Art of Making Dances {Not About Ferguson}”, a dance choreographed by Robin Prichard. The performance engages with U.S. history and the present climate of anti-Black violence through dance.

In Warner Main Space, dancer Kweku Bransah took the stage with a noose around his neck, wearing a suit and one clown shoe, to perform Robin Prichard’s “The Art of Making Dances {Not About Ferguson},” a dance interpretation of his narrative as an African American man in today’s political climate.

While the piece was performed for Oberlin students and faculty on Tuesday, it has existed for some time. The dance was choreographed by Prichard, an Associate Professor of Dance at the University of Akron, as a response to the deaths of Philando Castile and Alton Sterling and the police violence in Houston during the summer of 2016. Obies were lucky to witness a final performance of it on Friday, before Bransah, who has now graduated from the University of Akron, heads off to begin his career.

The piece opened with an exaggerated performance of minstrelsy and common southern dances of the early 20th century to the tune of “Keep On the Sunny Side,” with Bransah eventually escaping the noose around his neck through a series of acrobatics ending with an exaggerated sequence of bowing. From there, he removed his jacket and the clown shoe, and began a line of questioning he would build on throughout the piece: “I can’t help but wonder … how can dance be meaningful when people are being shot in the streets?”

The next section was performed to audio from a press conference held by Alton Sterling’s family—a stark contrast of brutal reality with onstage artistry. The following segments played with this performative relationship, using Nat King Cole’s “Smile” and Louis Armstrong’s “They Can’t Take That Away From Me” as well as audio from the video recordings of the murders of Philando Castile and Eric Garner.

Bransah’s incredible technique and theatricality as a performer translated fluidly through a variety of styles, from modern to ballet to breakdancing to improvisation. In the middle of the piece, while coming toward the audience, Bransah spoke of the smiling, head-bowing, non-threatening performance he must put on just to walk down the street — as he did so, his movements and facial expressions became uncomfortably clown-like and distorted, reminiscent of the piece’s opening. This small sequence was a jarring part of the dance as a whole — highlighting the performative nature of being a Black man, a Black university student, and a Black dancer in today’s America.

“I knew that it had to be Kweku and that if Kweku decided to be part of it, this piece would happen,” said Prichard in a question and answer session following the performance.

Bransah added that Prichard had wanted to make the piece “an autobiography of what I’ve been going through. So that was the start of it … before we could even think of moves, before she could even think of beginning to end, middle, all that stuff, the conversation needed to happen.”

While Prichard wrote the monologues performed in the piece, Bransah was given full jurisdiction over the tonality and inflection of his speech. He explained, “I like to kind of use the picture that she is the skeleton — so all the structure — and then I’m the muscles and ligaments and everything that makes the body really move.”

“The only thing that I came in with, with this process was that first two minutes,” Prichard said, speaking to the work’s collaborative nature. “The music very much creates irony in this piece, this idea of ‘always look on the sunny side’ and he’s giving us this happy, non-threatening persona … and I wanted the Louis Armstrong because of this idea that he’s singing, ‘You can’t take that away from me,’ and for me the thought is that anybody can take anything away in a moment.”

For African American men in America, even the most innocent run-in with the police could mean a life-or-death situation. Grappling with how a medium like dance can respond to this (and how being a lawyer or a social worker would be a much more direct way to help), Prichard said, “I have a lot of questions about ‘When is art at its fullest? Is it about bringing happiness, is it about something else?’”

For Visiting Assistant Professor of Dance Holly Handman-Lopez, who brought “The Art of Making Dances” to Oberlin after seeing it at the Lose Your Marbles fringe festival in Akron this summer, the vitality of the piece hinged on its ability to confront the question of dance’s role in the political and human sphere. “When I saw that piece, I just felt really moved and inspired. It immediately struck me, I think because of both its dance theater combination and its political nature, that our students would really respond to it and get a lot from seeing it,” she said. “I love that [it] was a bit of a call to action: What are you going to do? How are you going to do it?”

The piece concluded with an improvisation by Bransah, ending with these words: “How do you take actions that matter?”

To Prichard, this is the crux of the dance. “I feel like the dance is a response to the Black Lives Matter movement and the shootings … it’s Kweku’s biography inside of that larger thing, and then another thing is the questions about art and where its value is in a situation like this…I hope at the end that the audience feels like we have now passed it to the audience, and now it’s your job to do something with it.”