Jim Barnhart, Executive Chef at The Hotel at Oberlin 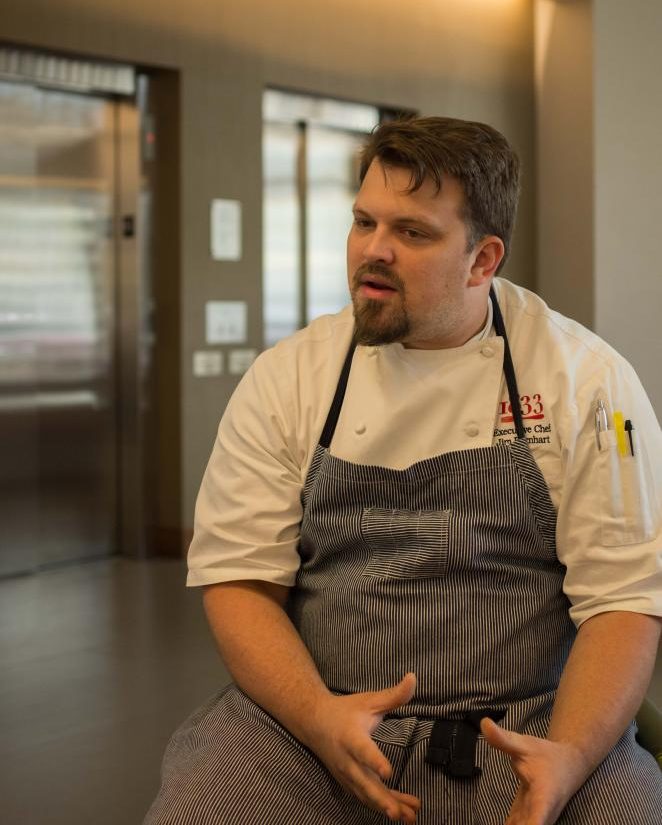 Jim Barnhart, a native of Grafton, Ohio, took culinary classes at Lorain County Joint Vocational School during his high school career after finding himself disinterested in typical classroom settings. He worked for The Wyndham Cleveland at Playhouse Square and The Ritz Carlton Cleveland before landing a position at The Hotel at Oberlin last year. He currently resides in Elyria with his wife and two daughters. In an attempt to generate revenue, the Hotel has made several renovations in the past few years, including the construction of a small bar and restaurant in the lobby, which is run by Barnhart.

What is your background in the industry, and how did you end up here?

I guess you could say I was born in Cleveland, and I lived there for the first couple years of my life. Then my mom and dad bought a small piece of property out here in [Lorain County]. That’s kind of where I grew up. I still own a little seven-acre farm right over there. We operate it [and] grow stuff. I have 10 beehives there and apple trees, fruit trees, [and] all kinds of perennial stuff. I went to Lorain County JVS, and I took the culinary program out there. I graduated top of my class with honors. I did a lot of culinary competitions, and I did have some scholarships to the Culinary Institute of America, but I ended up raising my child instead of going to college. But I was well connected after high school, so I started working for The Ritz Carlton. While I was there for six years, I went around [to various Ritz Carlton locations across the country] and did task force, not only to help out in kitchens, but to also see what other kitchens had to offer and to work for other chefs. All chefs have their own style, and before you can become a chef and develop your own style, you need to see what other people are doing to find inspiration.

What sparked your interest in cooking?

It was just kind of a part of my youth, making jams and jellies and grilling out with my dad, because he’d always invite the family over — nothing special, just hot dogs and hamburgers. But that’s really what inspired me to become a chef. It was in high school. I was really bored, and I don’t know if I was smart or not, but I was really uninspired. I went to the JVS and started to get my hands dirty and was like, “Wow, this is great.” I kind of took culinary on a whim, just because I liked watching cooking shows and helping my mom and dad cook. I realized I loved what I did.

When did you begin working in Oberlin?

I started here on January 10 of 2016, when the [Oberlin] Inn was still open, but I wasn’t a part of the Inn. I was more or less planning the menus for banquets and getting together the silverware and doing some of the logistical planning. The College had a lot to do with the [renovations] and a lot of the layout [of the restaurant in the new hotel], so I won’t take responsibility for the layout of this. It was just the pre-planning of opening something like this. I met some of the local farmers that are in Oberlin, just so that we could be as sustainable as possible.

How do you believe the renovations made to the Hotel have helped the community and the College financially? Do you think they have brought more people to Oberlin?

Yeah. So this [hotel] is the first of its kind, right? Platinum LEED certification, geothermal wells — it’s very forward-thinking. I think that being the model for the direction in which hospitality and hotels should build — that is what’s going to draw people here. We are doing food and service that is on a slightly more elevated level, from scratch, which is something that wasn’t done by the Oberlin Inn. [We’re] being a little more modern, I suppose.

What are some changes you would like to see to the Hotel, especially in the dining room?

Get rid of the white tables, get rid of the mismatched furniture, and put some color on the walls. Maybe some artwork, you know? I’m all about colorful and vibrant. Instead of white tabletops, let’s warm it up with some wood. Sometimes when it gets really hot, it gets really humid inside here, so again, we’re the first people to have this technology, and it’s not working just yet. I guess they’re honing and refining that. Finding that refinement in the technology is key and then just continuous growth of the staff that’s here. We’re trying to progress into a more modern fine-casual experience, but it’s training that and getting people all on board and getting some of the College students that we employ to really get on board with that and grasp that. What I really want is intuitive service. But it’s a college town, and all of [the] students have a ton on [their] plates. It takes a little bit more time and patience, but to continue to grow and progress in my community [is] the most amazing gift that I could truly have.

Do you have a say in what goes on the menu?

I have the say; I write all the menus. Our cocktail and beverage program all comes through me. It’s really just plugging in people and getting continuous growth. I can [help people grow] who continue to achieve excellence and strive for excellence. For me, the thought of a corn soup is, “How can I use the total amount of the corn, not just the kernels? Can we sweeten the soup with the juice from the corn stalk, like you would juice sugarcane? Can you thicken the soup with the natural starch that’s in the cob of the corn? And can you char the husk and make a beautiful, robust charred husk oil to go on that?”

Total product utilization is something that a lot of younger people who work in kitchens don’t think about out here. But I want to hire people in the community. I don’t want to sit here and ship people from New York City out here, though it’s great and would be easier. Why not grow the community here, grow the economy, and keep the money local?

What kind of feedback have you received?

Some people think that it’s supposed to be fine dining, and it’s not supposed to be. And then, my food is very eclectic: based on classics, but modernized — just a modern take on, like, eggplant parmesan. Some people are like, “I thought this was eggplant parmesan.” But it’s really my interpretation of that, which is slightly different but still really delicious. Slowly, people are starting to realize that I’m not just some cookie-cutter individual. I don’t just want to cook chicken parmesan. I want to cook chicken how I want to make it, as a chef interprets what he wants to cook and season. We’re still working on the soul. It takes time to develop a soul. Just getting that warm feeling, I guess.

What is your favorite part about working here and having a place in the Oberlin community?

Giving back to my community. My favorite part of working here is the fact that I went to the Lorain County JVS, which is right down the road, and before I was here, there weren’t restaurants that [would] get a whole pig in and break it down and use all of its parts. There wasn’t a restaurant where you could come and learn that you could fry garlic roots and make them crispy, and they taste nice and garlicky, and you’re using the total amount of that plant. Being able to share this with people under me and kind of grow their thought pattern is a sustainable, 21st-century forward-thinking food movement. That’s how Oberlin thinks. How do we eat more sustainable, get farmers to produce things more sustainably and be transparent about their growing? That’s one of the biggest things that I’m grateful for, in regards to the opportunity to be sustainable and teach the youth of my profession to be sustainable. It’s very important to me to give back. I even substitute [teach] at JVS, too.