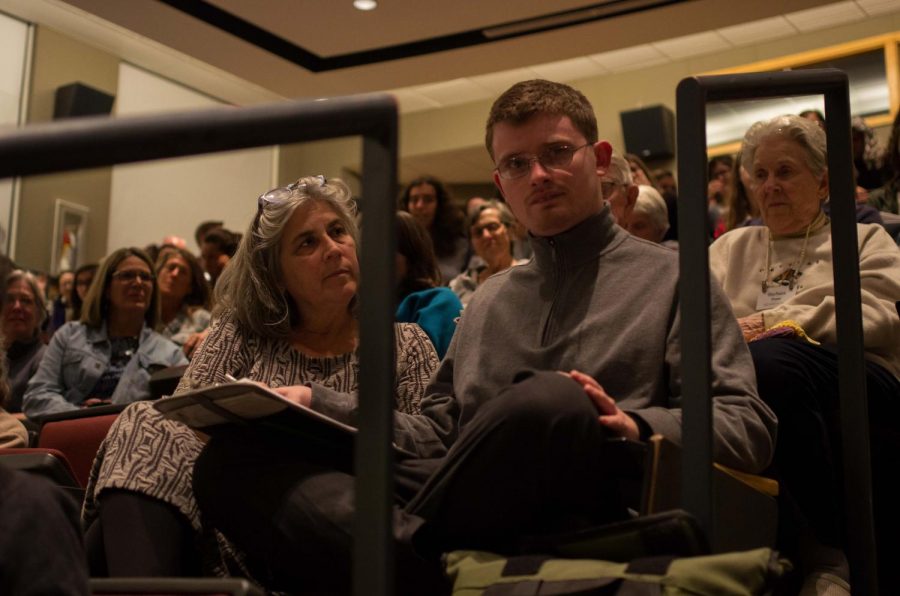 DJ Savarese, OC ’17, returned to Oberlin Sunday night for a screening of his documentary Deej, which follows his experiences over the past six years and advocates for civil rights and accessibility for autistic people.

The lights dim. An image of hands typing on a laptop keyboard appears on the screen. A digital voice narrates the scene as it dissolves into an animation of a poem. This is Deej, the autobiographical documentary by DJ “Deej” Savarese, OC ’17, whose art speaks to autistic civil rights and universal inclusion.

Dye Lecture Hall was nearly full Sunday night, when the film made its Oberlin College debut. Afterward, Savarese answered questions about the film, his life, and work. Throughout the film’s 70-minute run-time, there was laughter and applause from the audience, punctuated by emotional, pregnant silence. It was clear how much the work had resonated with the students, faculty, and community members who came to see the documentary.

In 2012, Savarese became “the first nonspeaking autistic student to attend college on a residential campus and live in the dorms,” as he refers to himself on the website for the documentary. Elizabeth Hamilton, associate professor of German Language and Literature, who introduced Deej, spoke about her experiences with Savarese as his first year academic advisor.

“He was quite interested in disability history and advocacy, and I was preparing to teach a first year seminar in disability and let him know that I was teaching that,” Hamilton said. “It was the first time I taught that first-year seminar, and it was very exciting to have him here. … It was [a] very vibrant conversation. That was where I got to know DJ best.”

Savarese uses a text-to-voice synthesizer and the help of an aide to communicate. It is very effective, especially given that many other people with nonspeaking autism never have the opportunity to communicate.

“Most people still perceive kids with autism as bad, instead of teaching us to read and write,” Savarese says in the film. “Our silence makes some estimate us as incapable, and soon we are left out of anything meaningful.”

The film illustrated that Savarese and his family have worked tirelessly to make sure that his disability would not exclude him from education and other meaningful life opportunities. At Oberlin, Savarese taught an ExCo on neurodiversity and served as one of several students on a disability and access working group. This group assembled a report on the campus climate for access and inclusion, which is available on the website of the Office of Equity, Diversity and Inclusion. He graduated Phi Beta Kappa in May, with a double major in Anthropology and Creative Writing. He is an Autistic Self Advocacy Network scholar fellow, as well as the recipient of the William Battrick Poetry Award and the Comfort Starr Award.

Savarese’s life has always been influenced by storytelling. As he says in the film, “In my childhood, cameras were translators.” To him, “words have meaning, not just melody.” In high school, he wrote Finding Our Voices, a play based on his experiences; published a chapbook, A Doorknob for the Eye; and of course, the camera would once again be his translator to the world as he worked on Deej as a co-producer.

Savarese’s brand of storytelling involves bracing vulnerability — the film discusses his feelings of isolation, his physical struggles, the stress of moving to Oberlin with his mother, and the abuse he endured as a child in the foster care system. Ultimately, he is pleased how this vulnerability has led to representation in the final product.

“I love the poetry and animation, and I love that it isn’t all perfect,” Savarese said. “I might wish it had come out a little sooner. It’s not easy to parade your high school self out after college.”

The most important thing for Savarese, however, is that the film tells an authentic story and starts a dialogue about disability and autistic civil rights.

“I love doing outreach, so I’m delighted to see it and to see its effects on other places,” he said. “I can’t wait to hear what other autistics bring to our discussion. I love hearing our voices. I also love making people rethink assumptions with film and poetry and scholarly work.”

Redefining assumptions and narratives about disability is at the crux of the conversation around inclusion. Savarese said in the question and answer session that he defines disability as a “by-product of ableism.”

“A lot of what we think about access and disability is centered in the person who doesn’t have a disability,” Hamilton said, adding that, for example, the phrase “wheelchair-bound” stems from the idea that for a person who can walk, a wheelchair would be binding; but for the person in the wheelchair, it is freeing and mobilizing.

For Savarese, genuine inclusion is paramount — hence the choice to use both written and spoken subtitling in the film.

“DJ is all about access, and lots of people have lots of different access needs,” Hamilton said. “Not everyone can see. Not everyone can hear. Not everyone can follow a linear narrative. So he, with enormous integrity and respect for others whose sensory needs might be different from his own, built in written subtitles for people who can’t hear, and the audio description for anybody who has difficulty seeing or processing.”

Savarese, who is currently touring with the film, has also recently been awarded a large grant for social activism for nonspeaking people.

“I’m glad I’m making it possible for other people to be free,” Savarese said. “I hope we all take our educations and make our world an imperfect, hopeful place.”

Deej will be broadcasted on America ReFramed, PBS World Channel, Oct 17th. Mudd library also has a copy of Deej in its collection and is available for students and faculty to check out.