On the Record with Ian Blanchard 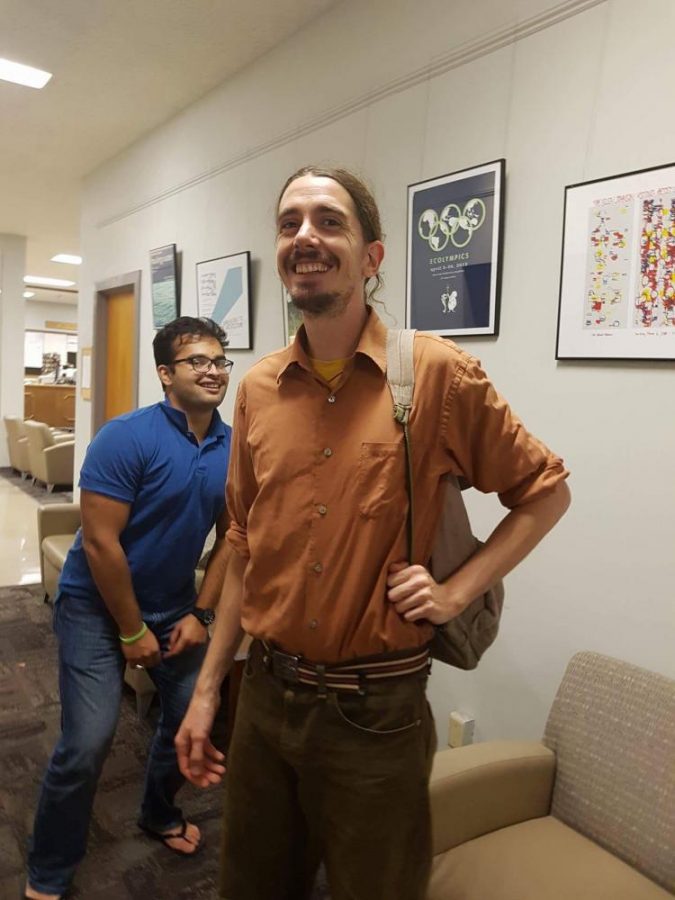 Ian Blanchard is one of the founders of Maya Universe Academy in Nepal. He graduated from College of the Atlantic in 2008 and spent the next several years working as a mushroom farmer, traveling the United States, and learning about sustainable agriculture before deciding to open a school. Maya Universe Academy is a nonprofit organization that works alongside communities to provide free education to children in villages across Nepal. It currently runs three schools in different districts, where the children are educated for free in return for their parents’ participation in bi-monthly volunteer activities. Maya Universe Academy also operates an organic farm, as well as raises chickens locally. Along with his educational work, Blanchard writes grants for his municipal environmental commission, builds sets for television and works as a videographer for the Nature Conservancy.

How, when, and where did you come up with the idea of opening a free private school?

I was approached by my friend Manjil [Rana] to talk about our lives [and] what had happened after school. He was still in school [and had] written this business proposal for a school that he wanted to open in his grandfather’s village. I was working as a farmer and this conversation got started about the differences between life in the United States for young college-educated people and life in Nepal for young college-educated people, and the idea of opening a school got started. When we started I was maybe 25, Manjil [was] 23, [Shin chul] Yoon was maybe 22, so we were all quite young, basically still kids ourselves. Then we got started on this project.

Many of the founders of Maya are from the international school Mahindra United World College of India. How was your network created, and what was the role of MUWCI considering that Maya is represented in 13 countries around the world?

It happened so organically — I mean, MUWCI is a tight group of people. Manjil went to MUWCI and so did Yoon. [UWC students] have their own grants, … [and] that’s an enormous extended international family. Now there’s a relationship between UWC and College of the Atlantic. … There’s a scholarship [so] UWC students get to go to College of the Atlantic, and that’s a really small school. [Yet] 10 percent [of the students] are UWC students, so that was the seed of our international community. There are a couple of websites out there like workaway, helpex, ecoteer — quite a few websites that function as a manifold of volunteering organizations and volunteers so that with a certain degree of accountability, people can investigate different volunteer organizations before they go. Initially, we just got a bunch of good reviews, and that put us at the top of the list. The organization grew from there.

When was your first visit to Nepal, and how was your experience learning Nepali?

I went there in April of 2011. I didn’t speak Nepali, and I would say that learning Nepali through immersion was a very abrupt process. The English language served me no good in the village, and so I had no option. In the beginning, I only knew 5 to 10 words, and those were the only 5 to 10 words I could communicate with, so I learned as many new words as I possibly could. The villagers were really excited that someone from abroad was there, trying to learn their language. So I was really encouraged, and it was definitely a communal effort in the village to teach me Nepali.

What motivated you to choose education as the change you wished to create in the world?

I come from a background of environmental and peace activism. We are facing so many problems globally, locally, culturally, socially. None of these problems have any solution without education. Whether we’re talking about global climate change, international terrorism — if we’re talking about famines and food shortages, none of these things are going to change or improve without education. It’s a slow process, but an educated youth is absolutely, in my opinion, the starting point for any major effective change to any of the global problems we face today.

What advice do you have for Shansi scholars at Oberlin about bridging the cultural gap between the West and Asia?

The biggest thing that I can say is to leave your mental drama and personal identity at home. Observe the world around you. Take the camera lens off yourself and look at the world around you. Don’t become too fixated on your personal identity and how you relate to it. Accept the world for what it is and move around within it. The world is changing, and we have to participate in that change, no matter what we do. If we focus too much on how we identify ourselves and our own idealistic tendencies, we end up isolating ourselves from the world we’re in.

Who are some of the educators in the world you look up to? And what do you think makes a good educator?

I would like to point [to] Paul Stamets for his work in mycology and biodiversity, maybe [John Amos] Comenius, who traveled all over Europe in the 17th century and was somebody who was early in combining ideas, text, and illustrations together. [And], I don’t know, my mom. There’s something about a good educator; they will learn more than they will teach.