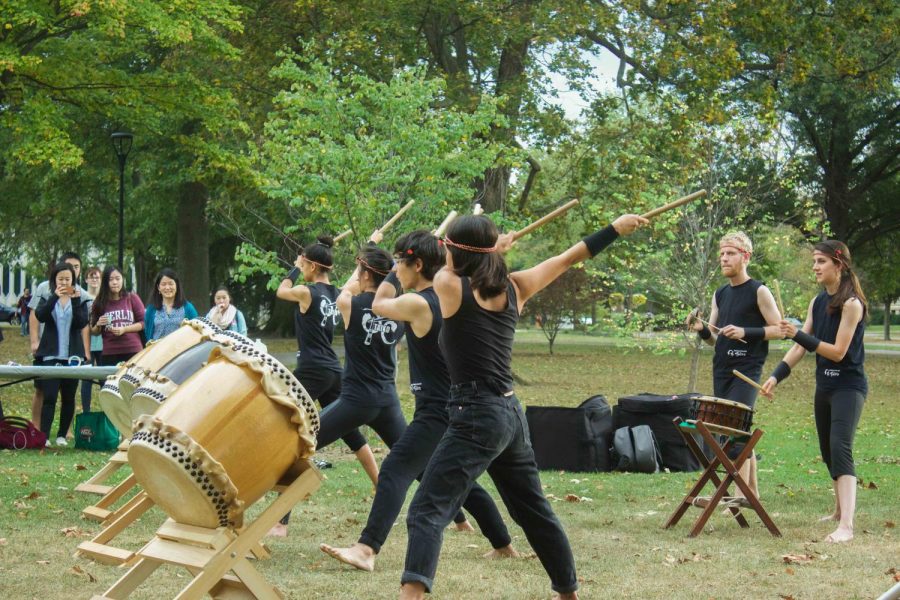 Members of OC Taiko perform during Wednesday's tree planing ceremony in Tappan Square. The ceremony honored saplings grown from seeds that had survived the dropping of the atomic bomb at Hiroshima.

College and community members held a dedication ceremony honoring a sapling planted in Tappan Square Wednesday. The sapling sprouted from seeds that survived the atomic bombing of Hiroshima, Japan. The Oberlin College Environmental Studies, East Asian Studies, and Biology departments, as well as Grounds Services and Oberlin Shansi have collaborated over the past two years to grow the seeds into saplings.

Tomoko Watanabe, co-founder of Green Legacy Hiroshima Initiative and a second-generation survivor of the atomic bombing in Hiroshima, gifted the trees to Oberlin in September 2015. Green Legacy’s mission is to “safeguard and spread worldwide the seeds and saplings of Hiroshima’s A-Bomb survivor trees,” according to its website.

Grounds Services Manager Dennis Greive, along with Biology professors and students, oversaw the handling and raising of the saplings.

“This is significant because it connects Oberlin with Japan, and with the reminder that working for peace all the time is really important,” Greive said.

Japanese and East Asian Studies Professor and Shansi Board of Trustees Member Ann Sherif helped orchestrate the donation, working with Green Legacy co-founders Watanabe and Nassrine Azimi to bring the seeds to Oberlin.

Despite traveling to Hiroshima multiple times in the past, connecting with Green Legacy gave Sherif a new perspective.

“I had never really noticed the trees,” Sherif said. “I had noticed that [Hiroshima] was a green city, but I had never really thought about [how] these trees are living creatures like ourselves and have stories to tell, and many of them died in the bombing, [too].”

“These are very emotional connections for the people in Hiroshima,” Shansi Executive Director Gavin Tritt said. “The symbolism and the power of these trees as survivors are symbolic of the renewal in that city. It’s a really powerful thing for people there.”

“I think planting the trees in Tappan Square, in the center of the community, gives us an opening to start thinking about Oberlin’s connection to the broader world outside of the United States,” Sherif added.

Shansi Fellow Annelise Giseburt, OC ’16, works in Hiroshima for Green Legacy and ANT-Hiroshima, a non-governmental organization that fosters peace initiatives both in Japan and internationally. Besides giving tours, writing articles, and updating Green Legacy’s website, Giseburt also facilitates some of the seed distribution.

“I hope the trees in Oberlin inspire people to learn more about Hiroshima, Nagasaki, and other places that have experienced the effects of nuclear weapons and nuclear power,” Giseburt wrote in an email to the Review.

College junior Rex Simmons, a student assistant for Oberlin’s Luce Initiative on Asian Studies and the Environment, aided in advertising and organizing the logistics for the dedication. Simmons, along with fellow LIASE assistants and College seniors Shang Yasuda and Danyang Dong, organize grant-provided events such as the dedication.

Green Legacy gifts saplings and seeds to institutions like schools, botanical gardens, and churches in 34 countries. According to Sherif, Oberlin High School plans to adopt a tree, and at least two saplings have been planted at Kendal at Oberlin. Two saplings were also planted in front of Shansi House Tuesday.

Presidential Scholar in Islamic Studies Mohammad Jafar Mahallati said he plans to take one of the trees back to his hometown of Shiraz, Iran. Mahallati became familiar with Green Legacy after lecturing in Hiroshima and touring the trees with Amizi.

“[The saplings] remain witness to the stupidity of human beings in using a bomb,” Mahallati said.

President Carmen Ambar watered the sapling at the ceremony, which featured a performance by Oberlin College Taiko and speeches by Sherif; Associate Professor of Biology Michael Moore; Taiyo Scanlon-Kimura, OC ’15; and Ambar.

“I think that we really are an international institution,” Ambar said.

Scanlon-Kimura echoed Ambar, adding that the saplings will serve as a “physical reminder of [the] relationship [between Oberlin and East Asia].”

Sherif and the students of LIASE are hoping to create a “Friends of Green Legacy” group that would allow students to get further involved in Green Legacy’s efforts.