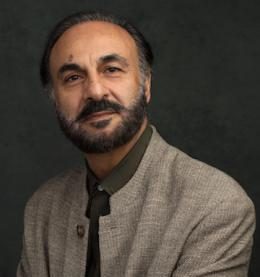 Mohammad Jafar Mahallati is the Presidential Scholar in Islamic Studies and Nancy Schrom Dye Chair in Middle East and North African Studies at Oberlin College, where he has been teaching for a decade. Prior to his arrival at Oberlin, he received his Ph.D. from McGill University. He has taught at Columbia, Princeton, Yale, and Georgetown, and has worked with Search for Common Ground, the Middle East Institute, and the Center for Strategic and International Affairs. From 1987–89, he served as Iran’s ambassador to the United Nations, when he played a major role in bringing an end to the Iran-Iraq War. His book, Ethics of War and Peace in Iran and Shi’i Islam, explores modern Iranian responses to war and peace. Mahallati addressed the topics presented in his book Wednesday in front of a crowd at Mudd library.

Where are you from and when did you come to Oberlin?

I am Iranian. I came to the U.S. in the end of the ’80s and began teaching at Columbia University. I was a professor in international relations [and] stayed there for seven years. Then, I decided that I should probably move to religion, and I dropped everything, … went to McGill University, [and] got my PhD in Islamic Studies. And then I came to Oberlin, and [have] stayed for 10 years now in the Religion department.

Why does friendship play such a large role in the work you do, and how you think about and teach religion?

Religion, by definition, is a philosophy of friendship — from the etymological roots of the word “religion” to the contents of the Message of Revelation. We know [religion] has been heavily abused by so many nations and so many communities, but its original message has been friendship. I think of friendship in two dimensions: friendship with God and human beings, and friendship to the environment. I think we have not paid enough attention to that original message of religion, and friendship is the original message of religion. But it’s overlooked because we or they thought that this was sentimental and of no value because it’s not based on intellectuality. I work here [at Oberlin] on friendship projects, showing that it has very important intellectual roots in religious studies, in philosophy studies, and so many other areas of study. Since I’ve been working on philosophy of friendship, [I’ve been] working with students to create a number of ventures like the Friendship Initiative. We have a website for that. We have Friendship Circle, which is a student organization. We meet weekly and have activities. Next semester, I’m teaching a whole course on friendship in economics, politics, religion, and [the] arts. I’m trying to bring it into all areas of study and show that it is essential.

For those who couldn’t make it tonight, what was the purpose of your speech? What is your book about?

My main message was that peacemaking has three areas: ethics of war, ethics of forgiveness, and ethics of friendship. My book was on the ethics of war, the first part of peacemaking. War doesn’t seem like art, but the message is that even if you aren’t doing a legitimate war — for example, defending yourself — still you have to observe ethics. It’s a message to religions: don’t be in conflict, but even if you are in conflict, there is something called ethics that you have to observe — ethics before war, ethics in war, and ethics after war. My book examines the Iranian reaction to the question of ethics of war — how they respond, how they understand. I went to different disciplines and different areas to come up with peoples’ mindsets on the ethics of war: how they react, how they want to react, or ideally how they think they should react in a war.

In chapter eight, you refer to ISIS as a mirror of how religion can be abused. Can you expand on this?

What ISIS did was in the name of Islam, and so it opened a window or a mirror in every religion and said, “This can happen to you, too.” So be careful. These guys can go so crazy in the name of religion. We should be careful, because we may have the potential. We should make sure that never happens to us.

You conclude your book with a quote that assures readers that one person can make a difference. Why?

It speaks to individuals, and even if the government and large numbers of people don’t listen, if one person listens, that’s important. In other words, it’s not a collective venture. “I can’t do it alone” isn’t an excuse, and therefore we are saying, “Yes, you can do it.”

What are some ways students can get involved, whether through volunteering or simply becoming informed?

They can send us posters, so we can display them on [our] website. It’s open to any kind of contribution. I advise students to look at it. It’s really impressive. We are waiting for new posters to come from Oberlin students.

What is the Peace Poster Project?

It is a website that includes about 110 posters coming mostly from Iran on peace, and because [many of] these posters do not have any language [written on them], you don’t need to worry about translation. They are very effective. Alexia [Hudson-Ward] and I got together and created this website, and it is open to all international contribution. We create a dialogue using these posters, and we are planning to expand it to art as well. We really encourage students to look at it and participate.

I spent 10 years with the United Nations. It’s really difficult when you only talk to representatives of government. It’s very difficult for people to speak their own conscience out when they are representing a whole nation. From time to time you see strong people who can do that. The U.N. is a very necessary organization, and I believe in it. It’s not perfect or effective, but it’s definitely much better than [a] lack [of it]. It should be strengthened and supported by nations in order to have a greater leverage to stop violence across the world. I believe in the U.N. after working there for 10 years. I do believe its paradigms should be shifted toward a higher level of ethics. They should focus on friendship rather than tolerance.

What are your plans for the future?

I’m open to anything if I make an impact or feel I can make a difference. Whatever I feel can help me make a peaceful difference, I will definitely work on.