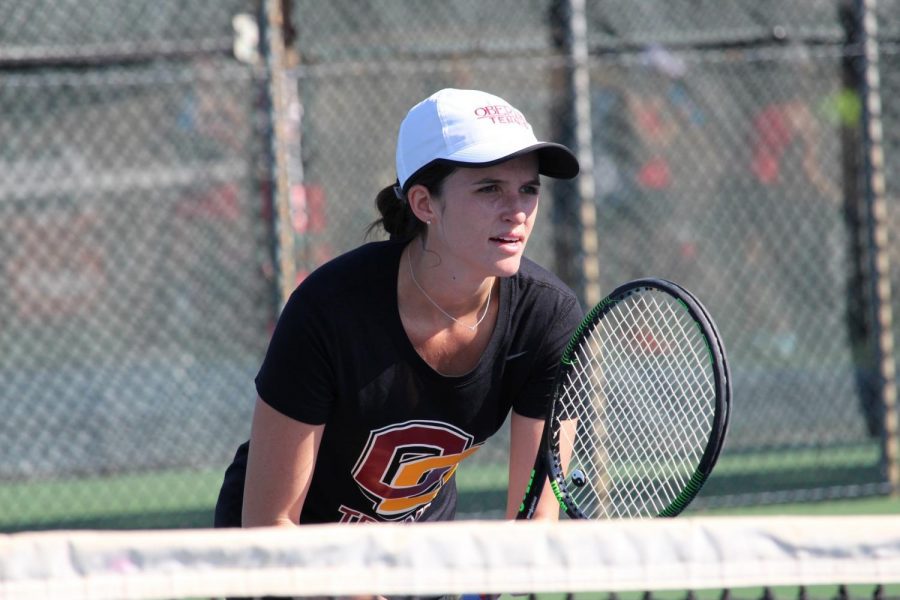 Senior Jackie McDermott focuses on her match against University of Findlay last Saturday, Sept. 30. McDermott and the rest of the Yeowomen will cap off their fall 2017 season tomorrow in Pittsburgh.

The men’s and women’s tennis teams both demonstrated strength and skill entering the second half of their fall seasons. The Yeomen shined bright at the Intercollegiate Tennis Association Central Regionals at Kalamazoo College last weekend with domination in doubles play, led by seniors Manickam Manickam and Robert Gittings, who beat Westminster College 8–2 in the first round. The Yeowomen followed up a commanding ITA Central Regionals win in Oberlin with a 7–2 victory over the University of Findlay Oilers Saturday.

The men culminated their efforts with their defeat of North Coast Athletic Conference competitors from Denison University, who they bested 8–5. Manickam and Gittings eventually fell in the quarterfinals to a No. 1-seeded pair from the University of Chicago.

The pair of junior Mattie Gittings and first-year Matthew Porges also reached the quarterfinals of the backdraw and came home from the ITA Regionals two victories deep.

“This was overall a really good weekend for our team,” Mattie Gittings said. “Our team has really been focusing on raising the daily level and intensity of our practices, so I think we all felt like we were ready to go into the invite and compete.”

Senior Michael Drougas displayed a strong effort in singles play as he swiftly navigated competition from DePauw University and Washington University. However, Drougas was eventually eliminated by a Kenyon College competitor, 6–3, 6–4. Sophomore Stephen Grupposo also held his own in singles, making it through the first rounds triumphantly before falling to Kenyon, 6–3, 5–7, 6–2.

The Yeowomen blazed ahead following their accomplished weekend at the ITA Regionals. The team exhibited solid consistency at their first home dual-match of the season, hosting the team from the University of Findlay. The Oilers were no match for the Yeowomen in doubles, as Oberlin swept all three matches, each at 8–5.

Seniors Jackie McDermott and Sarah Hughes won at the No. 1 seed, followed by teammates Delaney Black, a sophomore, and Mayada Audeh, a senior, at No. 2. Sophomores Rainie Heck and Lena Rich also delivered, taking the No. 3 seed victory over the Oilers.

“We had a good weekend facing all levels of competition, so it was a good confidence booster for us,” Rich said, “but we can always make improvements.”

Perhaps the highlight of the entire day was senior Sarah Hughes’ battle in singles play, which lasted over an hour and eventually went to a super-breaker, with Hughes ultimately pulling away with a 12–10 win.

McDermott, who captains the Yeowomen team, has been happiest with the support she receives from her teammates as they compete.

“The best moment for me [during the ITAs] was when I won a third set tiebreak against a strong player from Augustana [College],” McDermott wrote in an email to the Review.

“She was a real competitor, but I fought my heart out, too, and am proud to have played with a lot of intensity. The best part about that win was that my entire family — parents, grandparents, and sister — as well as a bunch of my friends and teammates were sitting there watching, cheering me on. I am beyond lucky to have so much support. That is what makes the Oberlin tennis community so special.”

The women’s team closes its fall run tomorrow in Pittsburgh, against competition from Carnegie Mellon University and Christopher Newport University.

“This weekend we’re looking to bring even more energy and fight harder, because the matches we have coming up are our toughest of the fall season,” Rich said. “This is the last weekend of the fall season, so we all want to leave it all out on the court and play our best.”

Meanwhile, the men’s team will cap off its fall season Sunday, facing the same competition in Pittsburgh.