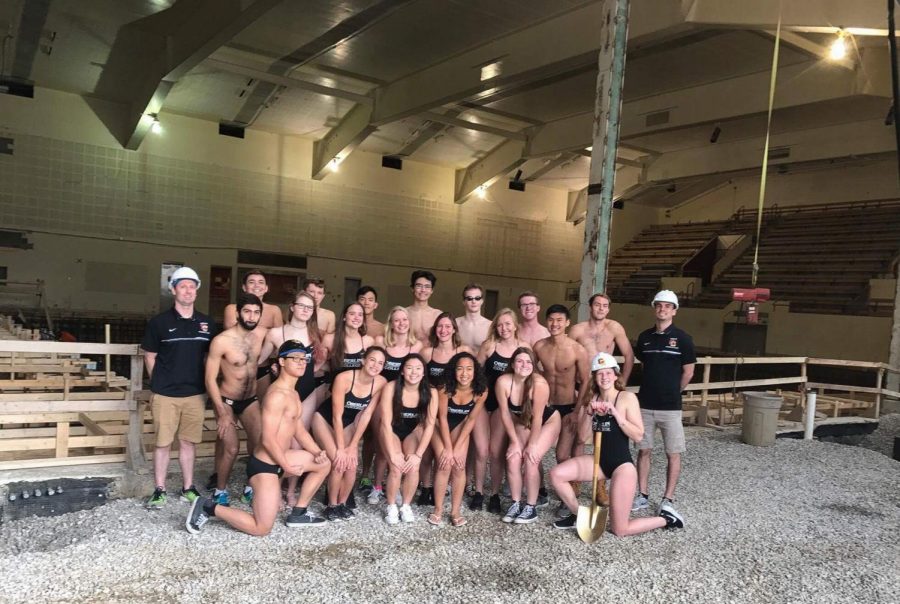 The 2016-2017 Swimming and Diving team poses at the site of the demolished Robert Carr Pool. They will compete solely in away meets this season, as the new pool is set to be completed in late August 2018.

The men and women’s swimming and diving teams have just begun North Coast Athletic Conference competition, but they are in the midst of their toughest challenge of the season: swimming without their pool. As the renovation of Philips gym continues, the Yeomen and Yeowomen will swim at Splash Zone, a swimming complex a few minutes off-campus. In one of the toughest conferences in Division III swimming and diving, lacking a pool will be a constant thorn in the athletes’ sides in what is sure to be a rebuilding year.

“The schedule has been a little chaotic because we have to work around Splash Zone’s hours, high school practices, and our own academic schedules, so we end up practicing really early in the morning and pretty late at night,” Malouf said. “Also, arranging transportation has been a little difficult, so we end up squeezing too many people into small cars.”

Not only do the swimmers and divers have to navigate practicing off-campus, but they must also overcome a lack of veteran leadership, as there are just four upperclassmen between the two teams. However, sophomore Michael Lin is confident that his team can compete despite their striking lack of experience.

“I often forget that our team is almost entirely comprised of underclassmen because lack of collegiate experience has nothing to do with work ethic,” Lin said.

Among the seven seniors who graduated last year was Maddie Prangley, OC ’17, who held three school records and departed as one of the most decorated swimmers in Oberlin’s history. In her place, the Yeowomen will look to junior Rachel Poyle, who will follow up her successful season last year as one of three upperclassmen on the women’s team. The Yeomen will rely on Lin and sophomore Jonathan Liu, who both had dominating seasons in their first years.

Head Coach Andrew Brabson — who enters his fifth season leading the team and previously won NCAC Women’s Swim Coach of the Year in 2015 — does not see the lack of senior presence as a huge hurdle this year.

“We have a great team atmosphere, and while it would be nice to have a few more seniors on the team, the chemistry and environment is such that we are continuing to set high goals for improvement and performance this season,” Brabson said.

Another challenge and one of the most unorthodox changes this season is the absence of home meets. The Yeomen and Yeowomen hosted four meets at home last year, of which the women went 2–2 and the men went 1–3. Brabson insisted that the familiarity of a home pool can be a competitive advantage in matchups, and not having that edge this year will be a huge hindrance for the teams.

“Having home meets provides a number of advantages,” Brabson said. “Not having to travel prior to a meet definitely helps with preparation for better performances. Many pools have small idiosyncrasies — lighting, walls, starting blocks, etc. — that are specific to that facility.”

The teams opened their season as the swimmers traveled to Kenyon and the divers to Denison Oct. 14. The men finished 7-of-9 and the women finished 6-of-9. Both conference rivals, Kenyon and Denison were top three in the nation last season. With the men finishing 8-of-10 and the women finishing 5-of-9 last season at the NCAC Championships, competing against the top of the conference early in the season should help prepare the Yeomen and Yeowomen come the NCAC Championships this season. Both teams will travel for eight more away meets before the conference championships. The teams travel to The College of Wooster tomorrow to swim against the Fighting Scots, as well as the Wittenberg University Tigers and the Ursuline College Arrows.