In The Locker Room with Danielle Miller and Julia Thorndike, Documentarians 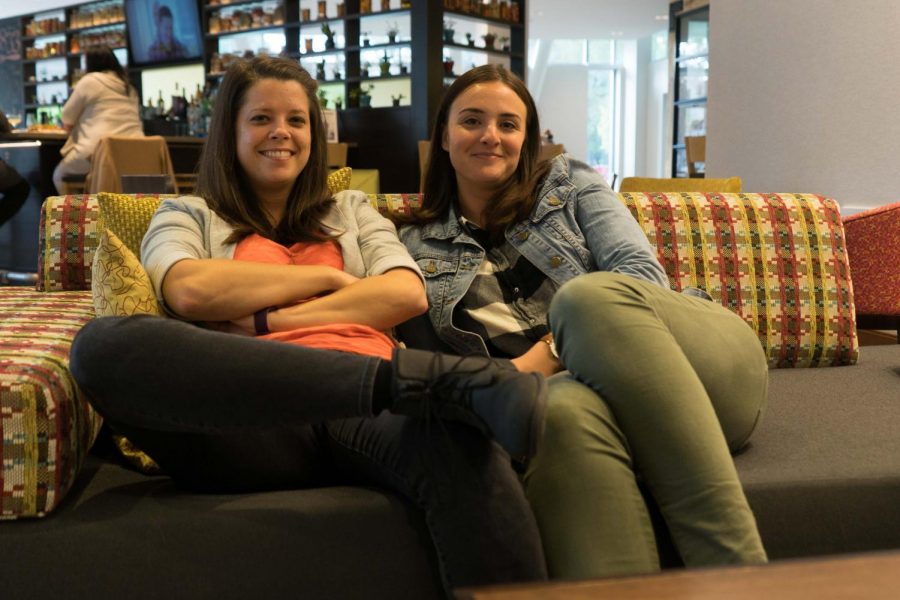 Danielle Miller (left) and Julia Thorndike, directors of Burn The Ships, a documentary about the Akron Racers that screened at the Apollo Theatre Wednesday.

This week, the Review sat down with Burn the Ships (2017) directors Danielle Miller and Julia Thorndike. The film follows the Akron Racers, a professional softball team in the National Pro Fastpitch (the only league of its kind in America) as they compete against the other four teams in the league, while also struggling to stay afloat amidst poor player retention and low salaries.

How did you both get into making films, and how did you get to be a part of Burn the Ships?

Julia Thorndike: I am a director at Think Media Studios, which is the production company that we both work for in Cleveland. I actually have a Bachelor of Fine Arts from the Cleveland Institute of Art, and I did a lot of performance work in college but slowly started to fall in love with the video aspect of [my studies] and somehow ended up where I am now. This is the first feature-length documentary I’ve done, and I got to do it with Danielle, who has done a few of them already. It was really a great process for the two of us to work together, especially as two female filmmakers, which gave us a real connection with the players. We’re in a world where maybe being a woman can be a little tougher, and then there was the team aspect and that we were working together and making a movie about a team, so those parallels helped the film come together.

Danielle Miller: I went to the Art Institute of Pittsburgh for Digital Media Production. I’m a senior editor at Think [Media Studios], and have been there going on 10 years now. I cut three feature-length documentaries before this, but I had hardly any directing experience.

DM: Because I had Julia to guide me.

JT: [Burn the Ships] got into the Cleveland International Film Festival, and we won the ReelWomenDirect Award for Excellence in Directing by a Woman this year, which was really cool. We also got picked up by a distributor, Gravitas Ventures, and our movie is now on iTunes, Amazon, Google Play, VUDU, and some other weird streaming services.

What made you want to make a documentary about the Akron Racers?

JT: We often get calls from different people who say, “Hey, I have an idea,” or “Would you want to make a movie about this?” One day we got a call from somebody who knew the Akron Racers, and they wanted us to get on a call with Joey Arrietta, who is the general manager of the Akron Racers, and just listen to her story. We had an hour-and-a-half phone call with her, and we kind of fell in love with her, her passion for the league, and her passion for the game.

DM: [The Akron Racers] naturally are the underdog. They are the “blue-collar” team, and they don’t have some of the resources that other teams in the league have, so they have to work a little harder to get what they do have. Because of that, you can see the amount of heart they put into it, so it’s an underdog story for sure. They have to work second jobs — they don’t make a living playing professional softball. Not even close, so they have to be working full-time jobs, which comes with plenty of problems. They have to find a job that will allow them to leave for three months [every summer], and they have to decide at some point, “Do I want to continue playing professional softball, or do I want to follow my career?” There is that juggling act that happens, specifically because they are women.

The Akron Racers’ careers are marked by their sacrifice and how long they can go playing professional softball before starting “real” careers. Seeing as this film gives the NPF more publicity than it is accustomed to, how did you approach their sacrifice as a part of being a professional athlete?

JT: As with any other documentary, there were things visually that we thought they would see about their sacrifice, like having to do their own laundry, whereas in the MLB they don’t. We realized that we had to follow the reality of what was happening, and a lot of that sacrifice was actually seen in their passion, in saying, “I’m willing to do this even though I’m not making any money,” or “even though I’m not famous.” Even though they don’t get the credit they deserve, they love the sport, and they want to be there for the future of the sport. You do see moments where people are struggling. They have to decide if they can keep going another year without making enough money.

DM: I think you also see some of that in Joey, the general manager, too. She sacrifices everything to keep this going. She’s a general manager who has to give speeches on the field after every single game. She’s maintaining the field. She’s cleaning up the stadium, and you just don’t see that in Major League Baseball. She’s working up to 80 hours a week just to keep this going for [the Racers], so she is kind of the embodiment of sacrifice for the entire league. So for us, our approach was just getting that across as much as possible and letting Joey be the heart of that struggle.

JT: A lot of the girls are so [locked in] for those three months that they’re on the team. They are just playing, and they love it. They almost don’t even articulate how hard it is to maintain a career with their salaries, because they’re so focused on the game. Those worries and that sacrifice they don’t say that much, so we saw it in watching them more than they even realized.

DM: We expected a lot more frustration from them, and we were frustrated on their behalf. They were just happy to get to keep playing.

How did the “blue collar” attitude of the Akron Racers reflect the NPF itself, and does the league feel disrespected by their lack of coverage?

JT: I think that parallel is definitely there. It’s Joey dragging the field herself and the league having to pay to get TV exposure.

DM: The Racers have been around the longest. They’ve been a team since day one [of the league]. I think that if we had been in any other city, we could have told a very similar, if not identical story, because they all have to be in it 100 percent just to do it. There’s no other option.

JT: Even if other teams may have more resources or interns than the Akron Racers do, they still aren’t getting their games shown on TV, they’re still not making the money that the MLB is making, and they’re not a household name. Even outside of that rust-belt, underdog mentality, [that disregard] is felt by all teams, and all throughout the grand scheme of women in sports.

DM: I just talked to Joey not too long ago, and [the team’s] frustration is rooted in the fact that they know they need to get a corporate sponsorship, and until that happens [the NPF] is not going anywhere. They’re banging their heads against the wall right now because it’s a cyclical problem. They would get more attention if [there was] more marketing. There would be more marketing if there were more fans in the seats, and there would be more fans in the seats if there was more marketing. The only way to get out of that trap is a corporate sponsorship. However, they can’t get anybody to take the risk on that, despite the fact that the evidence [that there could be a lot of viewership] is there, and it’s a good business decision to invest. They aren’t getting any productive or constructive input on what they need to do, it’s just flat no’s.

In making the film, was one of your goals to make the audience become a fan of the Akron Racers?

JT: I would love to say that we’re not biased, and that we’re trying to be as objective as possible, but also yeah, [we did].

DM: I think we both went into this frustrated with the situation of these women and wanting to make a difference. That being said, I don’t think we had to manipulate anything to make [the audience] like them. Joey is immediately loveable. The team is really just fun to watch. Whether they’re winning or losing, it doesn’t matter. You just enjoy watching them. So whether or not we were trying to make you watch them or root for them, you would have gotten there anyways.