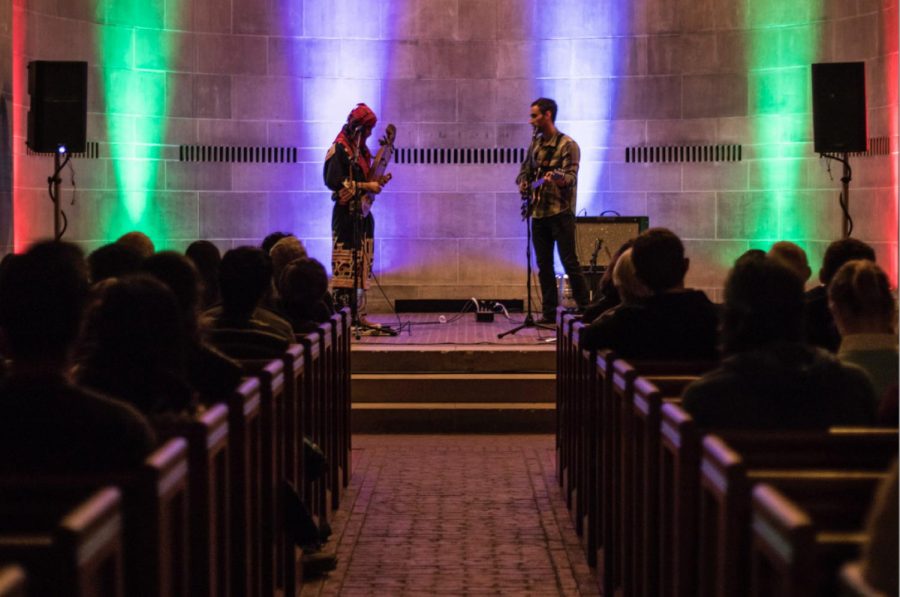 Ainu musician Oki Kano performs on tonkori to a packed Fairchild Chapel. Kano, along with ethnomusicologist Nate Renner, came to Oberlin this week for performances and lectures about indigenous music.

Oki Kano, professionally known as OKI, began singing before the applause died down from the packed audience in Fairchild Chapel. The Ainu performer, along with protegé and friend Nate Renner, came to Oberlin as part of The Luce Initiative on Asian Studies and the Environment grant that the College recently received. The two musicians participated in an informal chat at Cowhaus Creamery on Monday, performed their music in Fairchild on Tuesday, and gave a lecture at the Adam Joseph Lewis Center on Wednesday.

Professor Chie Sakakibara, Assistant Professor of Environmental Studies and co-chair of the Oberlin LIASE committee, was thrilled to bring these performing scholars to campus.

“I just wanted to bring in somebody who is underrepresented and underserved in a society that is considered to be highly evolved, and get their voices out,” Sakakibara said. “Really, [the Ainu are] a very resilient group of people. And often times, they solidify their cultural identity to be able to adapt to the challenges that they confront in society. That’s what I see in the creation of music, and the development of contemporary cultural identity that’s getting very global today.”

Kano is a scholar, musician, and social advocate from Asahikawa Ainu, Hokkaido, Japan — one of the Ainu communities on the island. His testimony to the U.N. contributed to Japan’s official recognition of the Ainu as an indigenous people in 2008. The Oki Dub Ainu Band — which he founded — has played festivals including No Nukes in 2013 and WOMADelaide in 2017, and he is currently the world’s only professional tonkori player; a tonkori being a five string, fretless instrument from the Sakhalin Islands.

“I put something into the music,” he said. “It’s hard to describe by words, you know. But something groovy.”

Rhythms are a key distinguishing feature of the tonkori, which Kano highlights both when he performs traditional music and when he creates new songs. Much of his performance on Tuesday was based upon repetition, and the building of specific beats — given the limited melodic variation of his instrument, rhythmic variation gives his songs life. Toward the end of the concert, he had the audience chanting and clapping along with him in a thunderous roar.

His other interests include building on Ainu culture, and he rejects concepts such as “preservation” when it comes to said culture. Despite the fact that the community has often had to battle discrimination, he rejects the idea that they are less vibrant or sustainable for it.

“It’s already vital. Nothing ever died,” he said. “[However], I really want to update Ainu music through my expression and my experience … of a trip through the world. I’m a trader through music.”

Nate Renner, a Ph.D. student in ethnomusicology at the University of Toronto, first met Kano when he was in his early 20s, and traveled to Japan to play guitar.

“I got bored very quickly,” he said, recalling his first few months as a “tourist” in the country — to remedy this, he decided to try and learn more traditional music, and took shamisen lessons. From there, he grew more interested in exploring indigeneity, and all the variation that is possible in one place.

“Japan has this monoethnic sort of image … I found out that it’s not really true,” Renner explained.

Since then, he has studied how indigenous tribes “use music to assert a presence on their ancestral lands, and human-environment relationships in Japan.” The exploration of different styles within Ainu culture and his exposure to Kano’s methodology inspired him to create songs based more upon his inner sense of musical style as well as his own mixed Canadian ancestry. For example, one of Renner’s songs was trilingual — utilizing English, Japanese, and Cree, one of the First Nations tribes indigenous to Canada.

He and Kano had this discovery in common — “Before [music], I was kind of escaping from that [identity],” says Kano.

Now, though, Kano frequently performs traditional Ainu songs. His set lists on Tuesday and Wednesday included songs to catch swordfish, “boy hunting” songs where “women use the tonkori and say, ‘let’s go over there,’” greeting songs, and a song of a man who lost his hut. When Kano finished performing at the end of the talk on Wednesday, Sakakibara took to the stage and exclaimed, “That was the most energetic lecture I’ve ever attended in my life.”