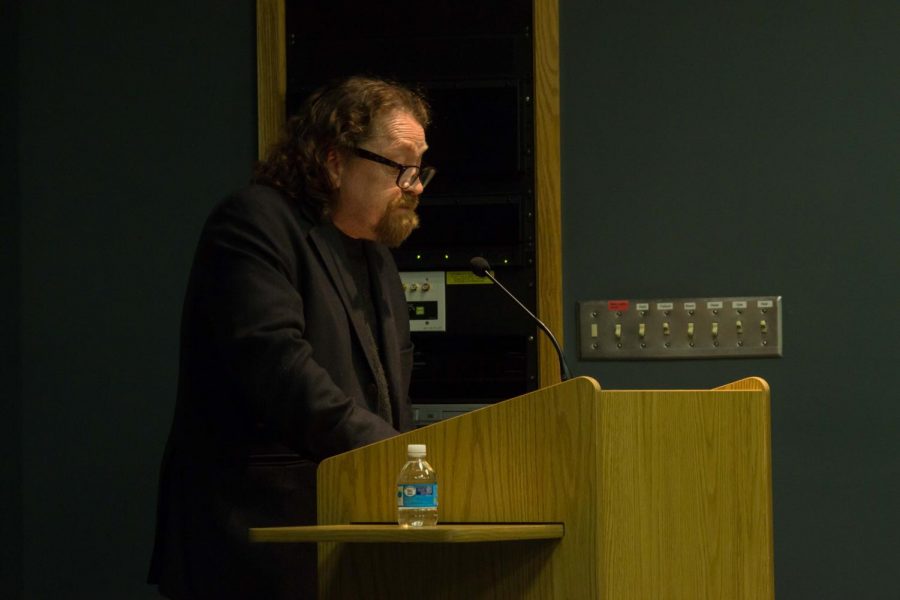 Editor’s note: This article contains mention of drug use, murder, and cancer.

Dan Chaon, Delaney Professor of Creative Writing, read from his latest novel, the dark, cunning Ill Will, and fielded questions as part of the Friends of the Oberlin College Libraries’ series on Wednesday night. In Ill Will, Chaon plays with perspective, form, and genre, earning a glowing review from The Washington Post which described it as “the scariest novel of the year.” In person, what came through especially in the section that Chaon read was his exposé of difficult emotions.

Set in Cleveland, Chaon’s home for the last few decades, the novel employs a heavy-handed and self-conscious horror aesthetic to paint a grim portrait of a crumbling suburban way of life. Beset on all sides by death, decay, and abandonment, Chaon’s characters lean heavily on drugs, alcohol, and denial, and a racing thriller-style plot keeps the reader enthralled.

While the story is told from many perspectives, Chaon limited his reading to a section voiced entirely by the protagonist Dustin’s youngest son Aaron, who has recently begun experimenting with heroin. College senior Gabe Steller called the reading “strong and emotive” — Chaon read clearly, and at times he paused and looked upwards as if reaching for the text not from the book in his hands, but from somewhere else.

The novel has generated exciting press for its complex and gripping plot that involves patricide, disappearances, satanic cults, and plenty of murders. Critics gleefully described “horror,” “anxiety,” “fear,” and “dread,” but the section Chaon read on Tuesday revealed other tonal elements in the novel.

“It was not scary or spooky per se, but it was certainly unnerving,” Steller wrote in an email to the Review.

Abandoned by his older brother Dennis, who is off at Cornell, and his recently deceased mother, Aaron is left at home alone with his drunk and oblivious father, to whom he feels less connected with each passing day. He’s enrolled in classes at nearby Cleveland State, but he hasn’t gone once, instead hanging out with a friend who is only known by his nickname “Rabbit.” They sit in his basement and shoot up, trying to avoid Rabbit’s mom, who suspects what they’re up to but feels powerless to stop them. She’s also dying of cancer, the same kind that killed Aaron’s mom. Rabbit ignores and berates his mother, but Aaron feels compassion for her. As the relationships become increasingly intimate, Chaon ended the reading on a moment of suspense.

While occult horror and murder didn’t make it into the section Chaon read, the novel’s sinister character was alluded to by scene and environment. Chaon frequently describes the darkness and emptiness of streets and rooms, leaving the reader feeling alone and unnerved. The lecture hall in which he read was well lit and crowded — one shudders to think of how it would’ve felt to read it in bed. He juxtaposes uncomfortable interactions between estranged friends and family members with horror tropes, describing one character’s feelings as, literally, “like a horror movie.”

Chaon’s experimentation with form is another compelling element of the novel. He includes large blank spaces on the page to convey pause, and plays with splitting the text into columns that “read both across and down,” to “show association, and to give the reader a sense of the different streams of thought that the characters are experiencing.” He includes other contemporary formal elements such as emojis and text messages, printing bubbles to convey when a communication is over text.

“I think everyone’s still scrambling what to do with text messages, because it’s become so important to understanding what’s going on in contemporary life,” Chaon said. “I’m trying to replicate some of that fragmentation.”

One of the challenges of writing a novel from so many perspectives is writing believable narrative voices for each of the characters. Chaon, in his mid-forties, writes convincingly from the perspective of someone a generation younger.

“People’s mode of speaking is something I’m particularly interested in, and trying to find a way to represent that in prose, because it feels important to me,” he said. “Getting at that is an important way to sort of figure out what the soul of our social life is. You have to understand how people talk in order to understand people.”

He cites his teenage sons and his college writing students as sources from which he drew vernacular and checked to see if his usage made sense.

The audience, though clearly impressed by Chaon’s performance, was especially excited to ask him about one development — Chaon is currently in conversation with Buster Productions to have the novel made into a ten-episode limited series. “No promises — but we’re in talks!” Chaon said. He has written a pilot and has begun working with a showrunner.