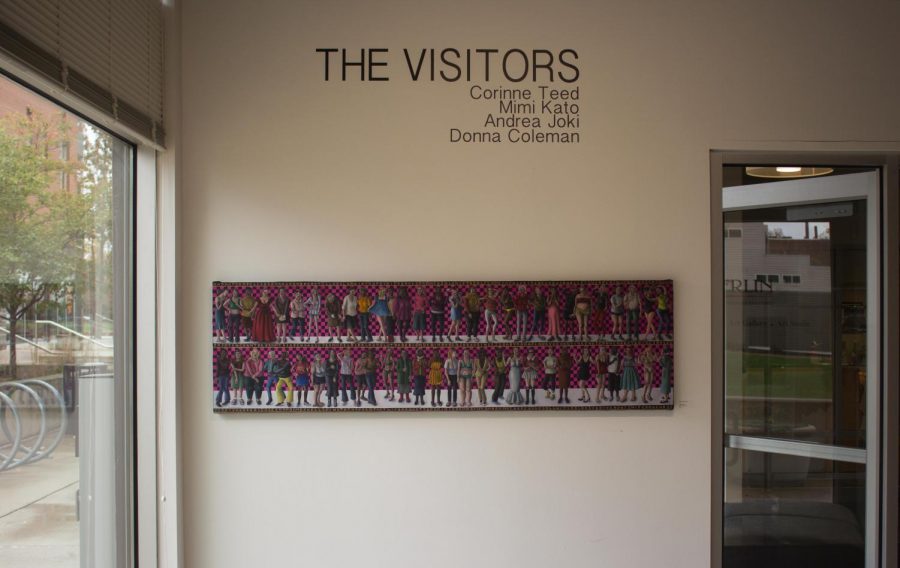 As students cycle through college from their first year to graduation and faculty members arrive and depart, every semester at Oberlin becomes a unique, ephemeral moment on campus. But this semester’s new art exhibition, The Visitors, showcases continuity of Oberlin’s artists past and present through the the work of some current and former visiting faculty members in the Art department, bringing these artists’ works together while they are all here.

The first of the exhibition’s two rooms is given over almost exclusively to Coleman’s work.

“My work takes up so much more space, and that’s because the other three [artists] had work in other shows,” she explained.

Coleman’s paintings explore personalities and character archetypes — one piece, “Costume Dramas,” is painted on an unusually-shaped surface and features groups of people including bodybuilders, clowns, scouts, cheerleaders, and brides. Another painting shows a parade of women with labels above and below them: “Slut; Babe; Blonde; Bimbo; Banshee; Princess; Baby mama; Floozy; Granny….” Other paintings play with color, or with presenting bodies in atypical configurations.

“It’s narrative work,” Coleman said. “I tell stories in a certain way, or bits of stories. I’m deeply fascinated by people and their interactions with each other, juxtaposing different groups of people together, and the kind of collision course or the harmony that that can bring. … I’m also very interested in looking at people who aren’t prominent — you know, the people who are between the cracks. I like to look at those people and pay attention to them, because in art I can do that and in real life I can’t always do that.”

The second room of the exhibition houses the other three artists’ work, all of which are extremely stylistically different from each other and from Coleman. Kato’s pieces in this exhibition are photographs and maps from an installation called “Watermark,” which she collaborated on with the Cleveland Urban Design Collaborative. This project involved using flowers and flags to trace the path of Giddings Brook, one of the city’s long-vanished waterways, which was buried during Cleveland’s peak period of expansion in the late-19th and early-20th centuries.

“The intent [of the project] is to visually reconnect Clevelanders with Giddings Brook … and remind the residents of our identity and responsibilities as citizens of the Great Lakes,” reads the artists’ statement featured in the exhibition.

The photographs are striking, featuring hundreds of small blue flags bending and weaving their way through an otherwise empty field, somehow evocative both of moving water and of a memorial. Along with being aesthetically fascinating, a great deal of the focus of “Watermark” is on education.

“For my work particularly, I just want people to understand about the project, the contents and idea, and what the future landscape is like,” Kato said. “I was … interested in how the city is built, and the history of the city, and also the ecological sense — what [can] we do to make the city better?”

For Kato, although all of the works featured in The Visitors are so different, they complement each other when featured in the same space.

“I think it’s really colorful,” she said. “I think the color kind of bounces off each other. I think it goes together in a very different way. [And] I think our work is so different, I think the viewer has a different reaction to all the work.”

Also featured in The Visitors are paintings and sculptures by Andrea Joki. Joki’s paintings “Untitled (Night Visions #3 and #4)” are a thrilling abstract explosion of colors and movement on canvas, while a diptych plays with patterns of clean straight lines stretching out to the borders of the canvas, complimenting a paint-splattered backdrop.

“I am interested in a language of painting that speaks to the idea of ‘not knowing,’ of positioning objects and images in relation to one another and referencing a logic of simultaneity in breaking down the binary,” Joki wrote in an email to the Review.

Joki’s section of the exhibition also features the only sculpture in The Visitors. The sculpture, “Unnamed,” is a long, feather-adorned pole made from found materials.

The final artist in The Visitors is Corinne Teed, who displayed a series of pieces involving screenprinting and photolithography. One of these, “Figure 2. Idealized structure of transitional habitat,” shows a cross-section of land with layers of soil and rock clearly demarcated by vivid colors. The image might have come out of a geology textbook, except that the cross-section also features carved-out pockets which look like they might have been made by small, burrowing animals and are inhabited by curled up adult humans.

“As research into queer ecology, ‘Mapping The Burrows’ uses traditional diagrammatic geologic imagery to re-imagine our habitation of landscapes, situation contemporary queer portraiture within utopic, multi-species communities,” Teed wrote in an email to the Review.

Teed’s print series, “Trophy Hunted,” also stars in the exhibit, illustrating a wolf’s body in vivid detail, every claw and bristle of fur painstakingly brought out. Behind the wolf, a forest is evoked in pale blues and greens, while a blank white space that forms the outline of a human holds up the wolf’s body.

“The Trophy Hunted print series uses photographs that trophy hunters post to the internet holding up wolves they have killed,” Teed wrote in an email to the Review. “I remove the hunter from the photograph, their silhouette haunting the fragility of the wolf carcass carved into a relief print.”

For Coleman, one of the exciting aspects of the exhibition is how much of it is open to interpretation.

“I hope that [people] enter into what the artist is offering and deeply consider the work that went into an artist’s decision to make this work and why that’s important,” she said.

The Visitors will remain free and open to the public in Richard D. Baron ’64 Art Gallery until Nov. 10, when it will culminate in a closing hosted by the Art department from 6–8 p.m.