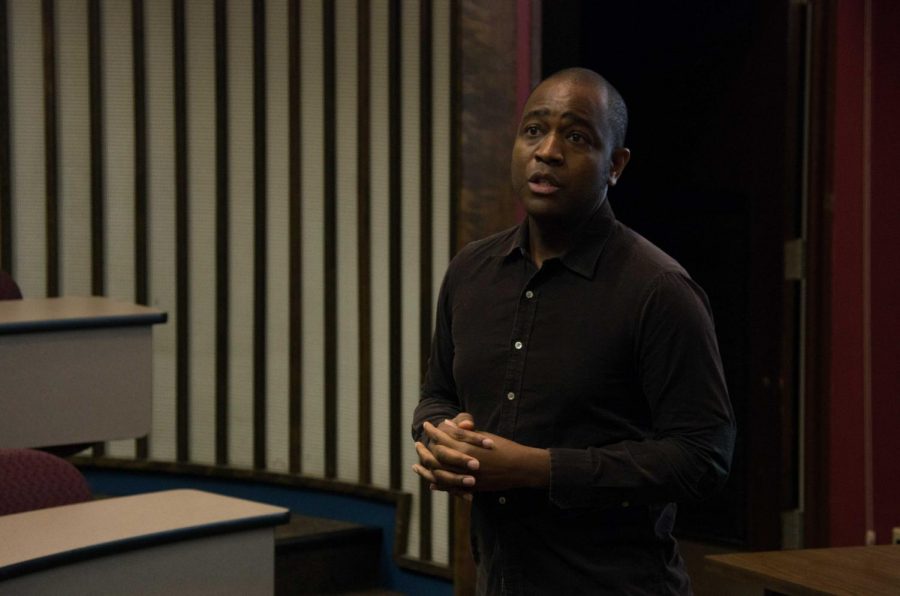 Vershawn Ashanti Young is an associate professor in the Department of Drama and Speech Communication at the University of Waterloo in Waterloo, Ontario. Young is a pioneer in the field of sociolinguistic code-meshing and has written books about African-American English, intercultural communication, about performances of masculinity, and representations of race in art, film, and literature. He held a talk at Oberlin called “Making Black Lives Matter in Digital Spaces: Race, Justice, and Literacy Instruction” Monday in King. He also led an interactive workshop called, “Allies of Code-Meshers and Translingual Writers: Who? How? And Why?”

How did you get into this field?

I got into the fields of writing and rhetoric and composition studies because I was a high school English teacher and high school drama teacher, and I started working at a university, working with principals. At the university they had a Ph.D. program in English, and because I was working there it was free, so I decided to do it. I decided to not go back to the school system after I finished my Ph.D. I felt like I was called to do the work that I’m doing. No one else is doing this work exactly the same way that I’m doing it, and it’s a little bit bolder and more uncompromising in terms of students’ rights to their language habits and own Englishes. Every time I tried to step away from this and do something else, I would be pulled right back in. I just don’t know why I’ve had such success around something that is very provocative and controversial.

Is the idea of code-meshing something you mulled over or something that just came to you?

I had been talking about the idea of students being allowed and encouraged to use their own voices in writing. It just seemed right to me. My dissertation director said to me, “I think what you’re talking about is code-meshing.” I was always critiquing code-switching, but I didn’t have a term for it. I have to attribute the term code-meshing to Joey Graff because he actually gave it to me and then I started using it in my writing, and then people started attributing it to me.

What are the differences between code-meshing and code-switching?

Code-meshing is encouraging the blending of dialects and registers and languages in one piece of writing or in one conversation. Code-switching, from an educational perspective, is using one particular dialect at home and using another one, which they identify as Standard English, at school and at work. Code-meshing says that that’s really not possible to do.

What do you say to critics who disagree with that meshing-component?

I hate to say it — I mean, I don’t hate to say it — but some of the critics who disagree with me are racist. I think that Rebecca Wheeler would never say she’s racist. She actually thinks she’s not racist. She wrote an article with the title “It Is What It Is.” When she’s talking about Black students and their language habits and when they would fail classes, she’s like, “It is what it is.” I’m speechless. Then she called me an African American Celebrationist. I’m like, “If I’m an African American Celebrationist, then you’re a white America Celebrationist.” She was trying to disparage what I was doing, and Celebrationist is a derogatory term in academic communtiies. If you’re celebrating something, you’re not really serious. I don’t play the race card to shut people down; I play the card in order to show them the face of the card. I use a lot of examples of white discourse that go unanalyzed because it comes from somebody that’s in power or from a different race. People must be getting used to me because I’m not getting as much resistance.

Can you talk about the connections you drew in your talk today about how literacy functions in violence?

Traditional literacy education is informed by violence. Teachers, especially English teachers and literacy teachers, teach by threat, which is, I think, a problem. You should never have to threaten anybody to get them to learn. People want to learn. Think about two-year-olds always asking questions. What’s this? What’s that? People want to learn. Think about games. To play a game, you have to learn how to play. Here’s how you teach by threat: “You’re not going to get a job if you don’t. You’re not going to pass another person’s class if you don’t.” You don’t have to do that. But a lot of threat goes on in education. It’s always a warning. To me, threatening is violent because it creates fear in students to do things that might be creative for them or might have them learn, and then they start self-censoring. Then there’s violence because the ideologies that are connected to race are connected to language. Most people don’t understand this, but race is expressed in ways other than how you look. If you’ve heard of passing, it’s not the color of skin that matters — it’s heritage, background, expressions.

How do you envision these practices being incorporated into mainstream accepted discourse?

I think it kind of is getting there. A lot of people are using this terminology in the academic arenas and sociolinguistics and applied linguistics. They have adopted the idea of code-meshing. It is being theorized by other linguists. It’s seeping into the academic arena, and it’s seeping into the larger culture. Everybody does it. Everybody code-meshes. There’s not one person who doesn’t. The task is to get people to see that they do it and to stop thinking ideologically that they don’t.