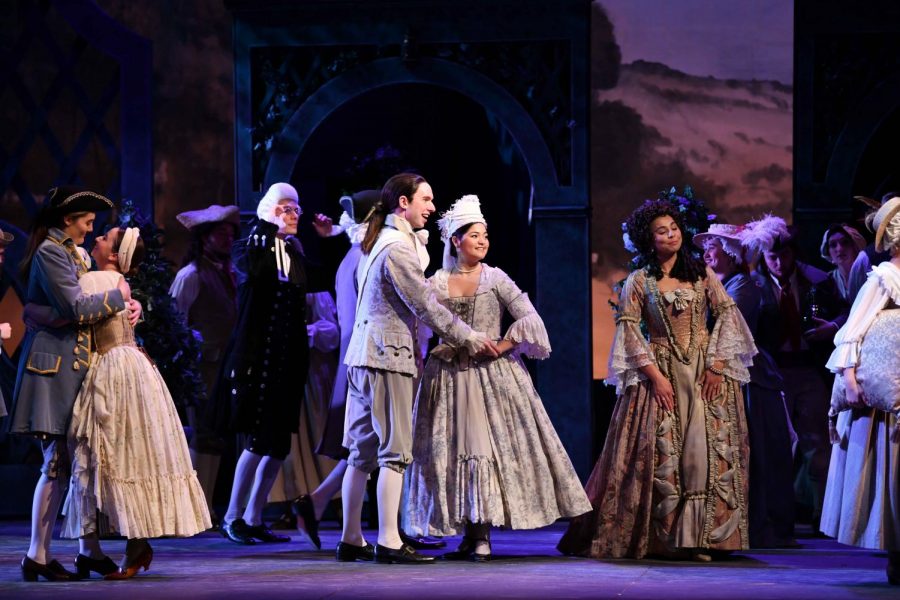 The operas presented by the Conservatory have long been a campus highlight, drawing students, faculty members, and community members to one knockout performance after another. This semester looks to be no different, as evidenced by Oberlin Opera Theater’s production of The Marriage of Figaro, which opened Wednesday night in Hall Auditorium. However, in the wider world, questions continue to be raised about the sustainability of opera as an art form. On Thursday night, Resonanz Opera presented a panel discussion by members of the Cleveland Opera Theater called “Opera is Alive in Cleveland!” to address these questions and celebrate the form.

“If it was not sustainable, we wouldn’t be sitting here,” said panelist and Cleveland Opera soprano Dorta Sobieska about the feasibility of producing operas in northeastern Ohio. “It has to change and it has to be changing; we don’t know what’s coming in 10 years, but it’s an art form that is alive. It has to respond to the changes in communities and people’s understandings of reality. … This is something that we’re still searching for, in terms of artistic appeal and artistic communication with the audience, but saying that it’s impossible is denying the fact that it does exist.”

David Bamberger, artistic director of Opera Theater at the Cleveland Institute of Music, had advice for young musicians who are considering a career in opera.

“It will always stand you in good stead to learn to do something very well,” Bamberger said. “If what you love at the moment is theater, learn to do that really, really well — as well as you can.”

In many ways, Oberlin’s production of The Marriage of Figaro showcases this spirit of excellence and perennial relevance, and the very best of the operatic genre. The opera is one of the most frequently performed in the world, and this popularity speaks to the enduring appeal of Mozart’s complex comedy, which engages themes of class and gendered power dynamics. It only takes a glance at recent headlines to see why these motifs will resonate with audiences today.

“This opera really is about #MeToo,” Oberlin Opera Theater Director Jonathon Field said. “In a sense, it’s been a situation that has been continuing, where men of power assume that that gives them the authority to determine the sexual lives of the people who work under them. And that’s kind of what it’s all about, in a nutshell.”

“There’s a reason this opera has remained popular since the 18th century,” wrote Conservatory senior Olivia Cosío, who plays Cherubino in the Wednesday and Saturday casts, in an email to the Review. “This opera is adored by so many because the content and music are still so relevant today. I truly believe that anyone can be touched by something in this opera.”

The plot of The Marriage of Figaro centers on Figaro and Suzanna, servants who are to be married, as well as Countess Rosina Almaviva and her husband, Count Almaviva. The Count has been making unwanted advances towards Suzanna, which infuriates Figaro. In a plot twist that would be thrilling in any contemporary story, let alone one first performed in 1786, the Count is outsmarted by Suzanna and the Countess Rosina, and everything works out for the best in the end.

“Le nozze di Figaro is a show that embodies love, humanity, and forgiveness,” Conservatory junior Diana Schwam, who plays the Countess, wrote in an email to the Review. “It reaches depths of vulnerability and heights of laughter. It’s a show that is truly a masterpiece in [and] of itself.”

The Marriage of Figaro fulfills the opulent potential of opera, from the music at the heart of the performance to the set and the costumes. The set, designed by Oberlin Theater production staff member Laura Carlson-Tarantowski, is ornate, intricate, and spiralling, and loaned itself to seamless set changes as pieces could simply be moved around to evoke an entirely different location. The arias have a broad emotional range, from snarky to amorous to creepy to heartbreaking. The powerful, joyous overture is well known and is often played independently as a concert piece as it stands on its own merits.

“There are pieces of music that you will recognize instantly, because you’ve either heard it in commercials, or you’ve heard it in movies,” Field said. “The music itself is very, very popular.”

One of the clearest reasons for this opera’s enduring appeal is that it wastes no opportunity for comedy. If there is a character hiding behind a chair, or under a dress, or listening in on a conversation that they were not meant to hear, there is no doubt that they will be discovered at the single worst possible moment. One long series of arias is entirely devoted to the question of who is hiding in a closet, as cast members quickly change places with one another. Cast members also frequently change costumes or cross-dress, creating a thrilling confusion about the characters’ identities. At one point, the Count attempts to seduce Suzanna but winds up involved in a tryst with his own wife who has swapped clothes with Suzanna. At the same time, Figaro sees through his beloved’s disguise but pretends not to, teasing her by flirting with her as though she were the Countess. The climactic moment of the play is hilariously abrupt; at one moment, beloved characters are being threatened at swordpoint, and in the next, these same characters are making amends to each other.

“I think that where the opera really becomes transcendent is, first, that the transgressor actually recognizes the extent of his transgressions and asks for forgiveness,” Field said, referring to the Count’s final aria as he recognizes the wrongness of his behavior towards both Suzanna and his wife. “And then he actually is forgiven. That idea of mercy is always a revolutionary idea, but also the idea of men of power taking an equal level with the people they work with was totally revolutionary. In a way, it’s still revolutionary today.”