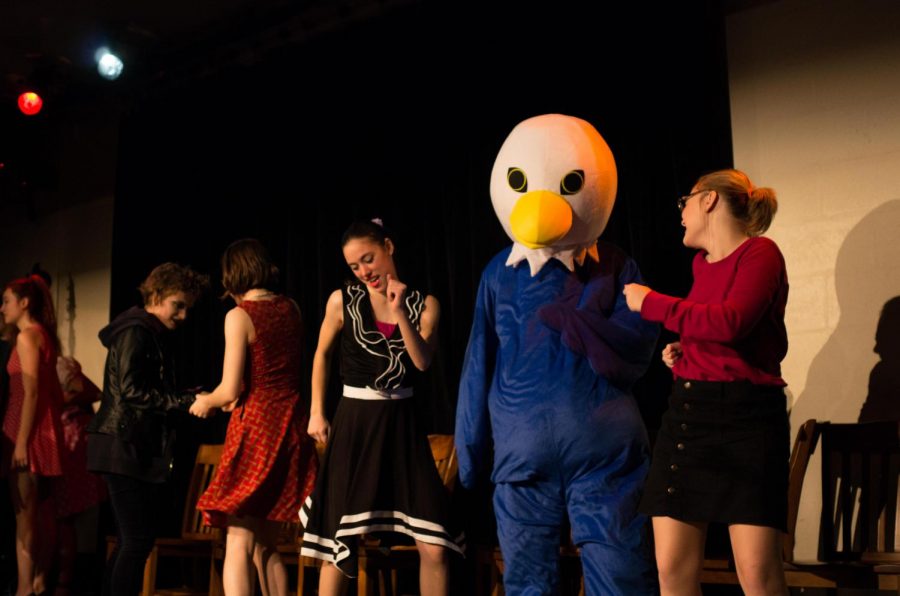 Conservatory sophomore Jacob Britton’s original jazz musical The Odds, a high school drama set in the 1950s, premiered last weekend at the Cat in the Cream.

The musical, set in the 1950s, engages with the struggles and anxieties faced by high school freshman, Aaron Baker (College first-year Tom Lovoi). Aaron ditches class for the first time, develops a crush on a nerdy girl, and faces tough teachers and bullying — all while living under the shadow of his father, the once-beloved high school mascot Leonard Baker (College sophomore Calder Laban). While Aaron’s friends and teachers wish that he were more like his father, Aaron is also burdened with his father’s shame. Leonard is infamous for once having left a football game early — as it turns out, because he saw Aaron’s mother-to-be choking and went to save her, abandoning his position as mascot and losing the home-team Bluebirds the game. After navigating the chaos of high school, Aaron reconciles his relationship with his father, continues his legacy as a mascot and, of course, gets the girl.

This slightly overdone storyline is contrasted with the refreshing, jazzy form of the play, highlighted by College sophomore and music director Paul Lawrence.

“I didn’t have anything specific in mind, and then, over fall break, I got an incredible opportunity to sit in a pit orchestra on Broadway,” Lawrence said. “I watched the musical director and all the people in the pit do everything so precisely and at such a high level of professionalism. That really gave me a model to what I wanted to do.”

The major themes of the play — friendship, camaraderie, and building relationships — were reflected as clearly behind the scenes as they were on stage. The cast and crew had nothing but effusive praise for each other’s contributions.

“Probably my biggest idol was my [high school] vocal director Carol Burton,” Lawrence said. “She would put friendship and relationships with people in her group first [and] because of that, every [production] I was in with her was so much tighter and close-knit and better than anything else. She was the person that I would always think about when I was working on this.”

“The main takeaway I got from the creative process was that there is no such thing as a one-man show,” Britton added. “I could not have done it without the crew and the show would not be as good without their help.”

The focus on relationships shines through the seamless flow of the play. Like most of the cast and crew, director and College sophomore Abigail Bowman was a close friend of Britton before the idea of The Odds was even pitched for production.

“Jacob … is one of my closest friends, and I actually got the job of director by accident,” Bowman said. “He wanted to pitch the musical and he needed a director, and I was just sitting next to him when he got [called by the professor], so I said that I would direct it.”

Audience members also seemed to feel that it was more the hard work, close-knit dynamic, and talent of the cast, rather than the story itself, that really pulled the play through.

“On the whole, I had a lot of fun watching it,” College sophomore Leo Hochberg said. “It had its rough patches, but I know everyone who worked on it worked very hard, and I’m very proud [of them].”

With a respectable turnout on The Odds’ opening night, the two-hour play garnered laughs, particularly at the antics and dialogues of three supporting characters: Veronica (College sophomore Kathryn Blessington), Charles (College sophomore Danny Rothberg), and Phoebe (College sophomore Mirella Gruesser-Smith). The misogynistic and potentially offensive representations of these three characters awkwardly handles gender and sexuality issues pertinent to school and college campuses across the U.S. Each female character in the play is showcased as either partially or completely dependent on a male character’s attention. In particular, Veronica creates a tragically one-dimensional character, with the sole motivation of finding her best friend, Trinity, a boyfriend. Similarly, Charles, a class clown, delivered lines such as, “A real man takes what he wants,” which one can only hope were meant to intentionally mock the misogynistic culture of high school and attempt to send a satirical message about patriarchal values to the audience. Phoebe represents a stereotypical Oberlin student: She is goth, gay, and makes references to capitalism and societal issues, which could be interpreted as either token diversity or merely poking good-hearted fun at our own student body.

While the play is sometimes clumsy in its attempts to delve into deeper interpersonal problems, Lawrence rightfully lauded its scope.

“It’s kind of an [eclectic] little show. It has a little bit of everything,” he said. “It’s goofy, a little serious but not too serious. Be ready for anything.”