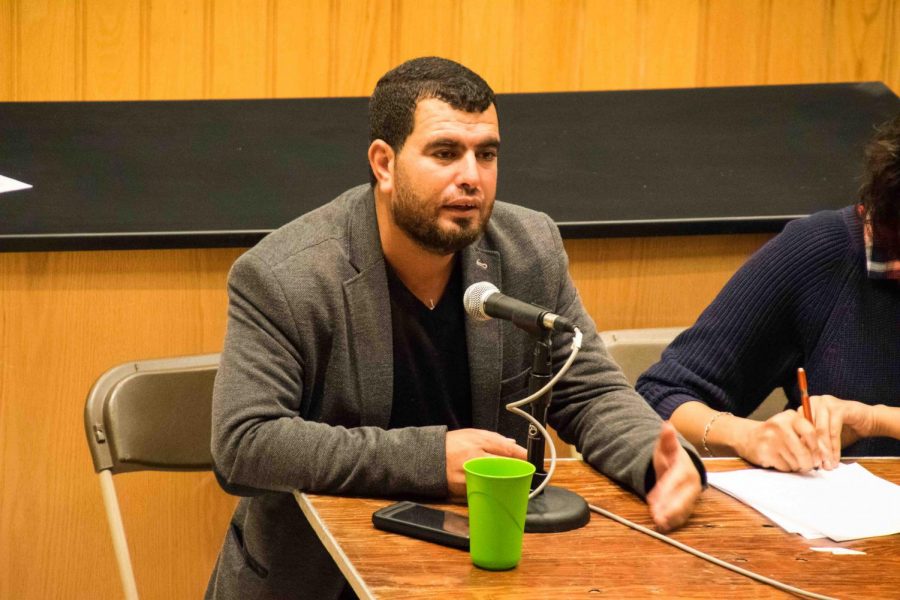 Palestinian activist Nasser Nawaj’ah came to Oberlin Wednesday to share his personal experiences with students and educate them on the demolition of villages in the occupied West Bank. His visit was sponsored by J Street U, an organization that is active at at least 70 campuses nationwide. Oberlin was one of two schools chosen to host Nawaj’ah.

Nawaj’ah was born in the small village of Susya, Palestine, which has been wrecked seven times since 1985 and is currently being demolished. Families have been displaced, children have been prevented from receiving an education, and Israel has gained control over all aspects of Palestinian lives.

“Where is justice?” Nawaj’ah asked. “The state decreed a decision to demolish everything — from schools to hospitals toclinics [to] houses.”

Susya is just one of the many villages under threat by the Israeli state. Its annihilation may trigger even more violence in the surrounding area of the West Bank, according to Nawaj’ah.

“At least 28 villages are under threat of demolition,” Nawaj’ah said. “Susya is the one village that is internally known. If Susya gets demolished, then the other villages can be destroyed as well.”

Nawaj’ah emphasized that American citizens can influence — even prevent — further injustices and oppression in Palestine.

“We are in need of the international community’s solidarity and support,” he said. “These days, American silence gives the impression that it’s OK to destroy Susya and other areas of Palestine. Our message is to have you ask the government to get out of its silence — to see the role that human rights have in this town.”

College senior Ethan Aronson and junior Yael Reichler, co-chairs of the Oberlin chapter of J Street, said that the goal of the organization is to build a sense of community and use it to advocate for peace.

“We want to push the American political community and the American Jewish community to seek national leadership and push for the end of the occupation in the areas in the West Bank,” Aronson said.

“This campaign recognizes the urgent situation in the West Bank, especially in regards to the demolition of villages like Susya,” Reichler said. “With this campaign we have the ability to put international pressure on Netanyahu and the Israeli government and to support the work of Palestinian communities to ensure a future of peace in this region.”

Nawaj’ah also has partnerships with Rabbis for Human Rights and B’Tselem, which he said he finds particularly challenging as a native Palestinian. Rabbis for Human Rights and B’Tselem are organizations that fight for Palestinian rights in Israeli-occupied territories. However, he said he believes such partnerships may be necessary to induce change and end the suffering in his homeland.

“If they [Susyans] scream, it would only be the surrounding neighborhoods of Palestine that would hear them,” Nawaj’ah said. “Now with the cooperation of Israel and Palestine, the whole world can hear Susya.”

“This event is a great kickoff for the year and for a lifetime of activism for American students,” College junior Sadie Keller said. “We have so much of a role to play in protecting Suysa and ending the occupation in Palestine. It’s one thing to make a campaign. It’s another thing to have someone look you in the eye and tell you that their son asked them, ‘Why can’t I have the things the Israelis do?’”

The intention of his presentations, Nawaj’ah said, is to inspire every American citizen to contribute to the fight against destruction and oppression in Palestine.

“Suysa is in danger,” Nawaj’ah said. “Suysa is under threat. Every American voice should urge the American government to end the silence.”