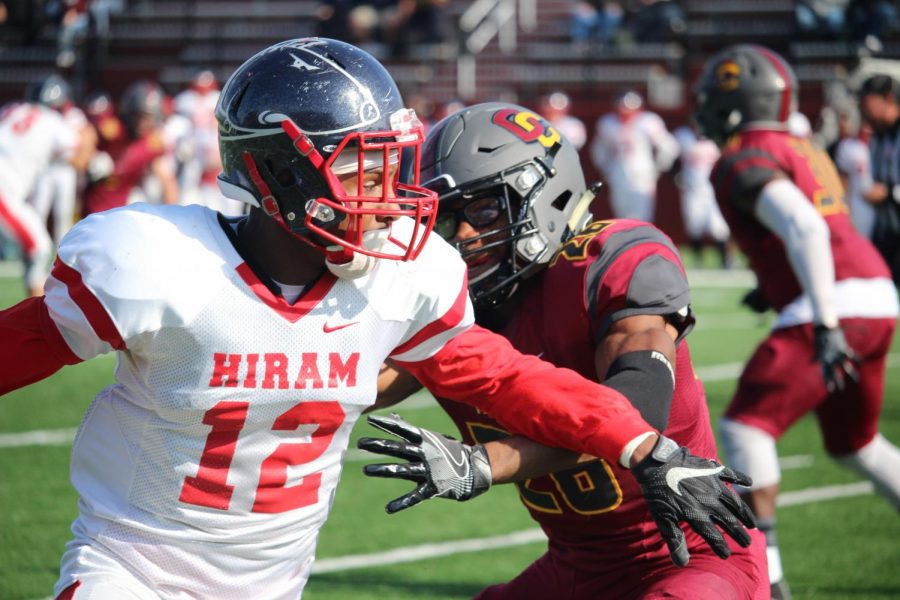 The Yeomen won their first game in nearly two months last Saturday, as they defeated the Hiram College Terriers 27–14, holding control for practically the entire game. The win, the Yeomen’s third at home this season, also put an end to their six-game losing streak.

“It was great to execute consistently,” sophomore linebacker Von Wooding said. “We always find better energy when we play at home in front of our fans.”

The game took place during parents weekend and featured an impressive turnout from many of the Yeomen’s family members in attendance, making the win all the more rewarding, according to Wooding.

“My parents were there, and lots of my teammates’ parents made long trips to watch us play,” he said. “That made Saturday’s win even better.”

The Yeomen got on the Bailey board first, as a forceful interception by senior linebacker Drew Nolan resulted in a field goal from sophomore kicker Michael Leshchyshyn. The Terriers were quick to respond, reeling in a 21-yard pass for a touchdown, going up 7–3. The Yeomen then fired back with a 39-yard touchdown run by sophomore quarterback Zach Taylor, giving the Yeomen a 13–7 lead at the half. Oberlin seized control of the game from there, eliminating any chance of a Hiram comeback.

“After the half, we took away most of their successful plays,” Wooding said.

An early 18-yard run by Taylor in the beginning of the third quarter put the Yeomen in good scoring position, eventually leading to a touchdown by sophomore running back Melvin Briggs — his second of the season.

Both Briggs and Taylor contributed game-changing offensive outings during the Saturday game, running for 113 yards and 104 yards, respectively.

“The key … was to buy into our game plan early on and execute our assignments consistently,” Taylor said. “And the team dynamic was great. We were supportive of each other throughout the entire game.”

The premiere defensive performance came from Wooding as his 15 tackles of the day increased his season total to 93 and earned him NCAC Defensive Player. If Wooding can earn seven more tackles in tomorrow’s game against the Allegheny College Gators, he will become the first Yeoman to achieve 100 tackles in a season since Chase Palmer, OC ’08, who made 103 in 2007. Wooding credits much of his success, however, to the effort executed by the whole team.

“Our defense saw a culmination of everything we’ve been working towards thus far this season,” Jackson said. “We really got back to our roots — playing fast and just swarming to the football.”

The Yeomen take the field again tomorrow at 1 p.m. for their 2017 season finale, where they will face the Allegheny College Gators and honor their 16 seniors. They are hoping to uphold the success of the past week to finish the season on a strong note, according to Taylor.

“We’re going to focus on how we play,” Taylor said, “not who we play.”