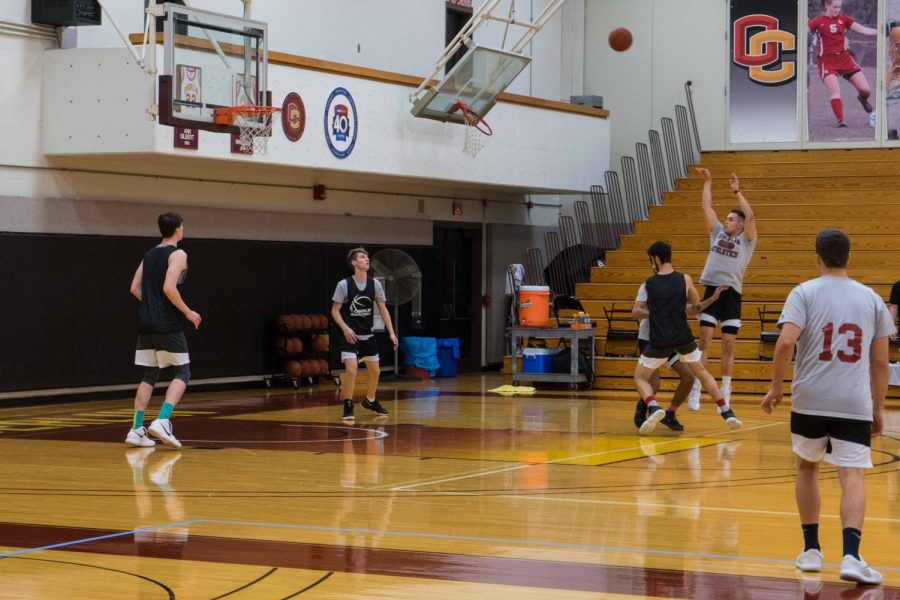 Sophomore forward Andre Campbell pulls up for a mid-range jumper in the Yeomen’s practice yesterday.

The men’s and women’s basketball teams will both take the court next week for the first time since last February. The Yeowomen foster big expectations, looking to build on their past success after falling in the North Coast Athletic Conference Tournament semifinals last winter to the number 12-ranked DePauw Tigers 58–54. The Yeomen face an uphill battle this year, as they will follow up a 3–22 record with zero returning seniors, including their lone All-NCAC Honorable Mention athlete Jack Poyle, OC ’17. Yeowomen Head Coach Kerry Jenkins, who enters his 10th season with the team as the coach with the most wins in program history with 81 victories, does not see much changing with his team’s roster or approach.

“Compared to last year, not much has changed. We’re almost exactly the same from a roster standpoint, other than adding three first-years,” Jenkins said. “We only graduated one senior last year, and we brought back all five starters and ten of our eleven best players.”

Last year, the Yeowomen went 13–14 overall, including 9–7 in the NCAC, and were defensive juggernauts as they lead all Division III teams in total blocks (203) and blocks per game (7.5). Junior center Olivia Canning, who recorded a program record of 103 blocks, joined senior forward Abby Andrews as All-NCAC Second Team Members. She looks to lead the Yeowomen back to the NCAC Tournament again this year. Junior guard Alex Stipano, another key returning player this season, seeks to sustain her offensive success last season, when she led the team with 10.1 points per game in scoring.

Senior forward Anna Moore, who appeared in all 27 games last season, has confidence in the Yeowomen’s disciplined approach to the offseason.

“We’re getting ready for the season this year by working on skills, conditioning, and playing within our team system,” Moore said. “We’re working hard and coming together. [You know what they say:] learning and labor.”

The Yeowomen will kick off their season Wednesday, Nov. 15, against the University of Mount Union Purple Raiders in Alliance, Ohio.

“We’re preparing like we do every year,” Jenkins said. “It’s cliché amongst coaches to say the phrase ‘trust the process’, and we all say it. But right now we do feel like we have a process. We have to incrementally build ourselves up. We’re not too concerned on what happens early in the season, we just know that we’re building depth, chemistry, and cohesion as a group.”

While the Yeomen do not have as much to build on coming into this season, they will look to cultivate the potential on their incredibly young team. With no seniors, just three juniors, and six first-years on a 16-person team, the Yeomen hope to grow from their 3–22 record from last year. With just a 2–16 NCAC record last year, they were the only basketball team not to compete in the NCAC tournament, ranking dead last in the conference.

The Yeomen do lack experience, but they have been working hard to catch up to the rest of the conference. Junior guard Eli Silverman-Lloyd will look to carry much of the offensive burden, as he was third on the team in points per game last year with 9.4, and the first-years have been quick to adjust to the breaks of the game at the Division III level. In an offseason that included a fall break trip to Toronto to train and bond, first-year forward Isaac Finestone has been as much a student as a player of the game.

“We are preparing just as most teams do,” Finestone said. “We’ve set the building blocks for our offense and defense and are now building upon both every day. We’ve also taken part in leadership training and team bonding that has helped us construct a healthy team atmosphere. This year you can expect a young and optimistic team with strong leaders and plenty of energy.”

The Yeomen will begin their season this Wednesday, as they face the reigning NCAC champion the College of Wooster Fighting Scots, in Wooster, Ohio.