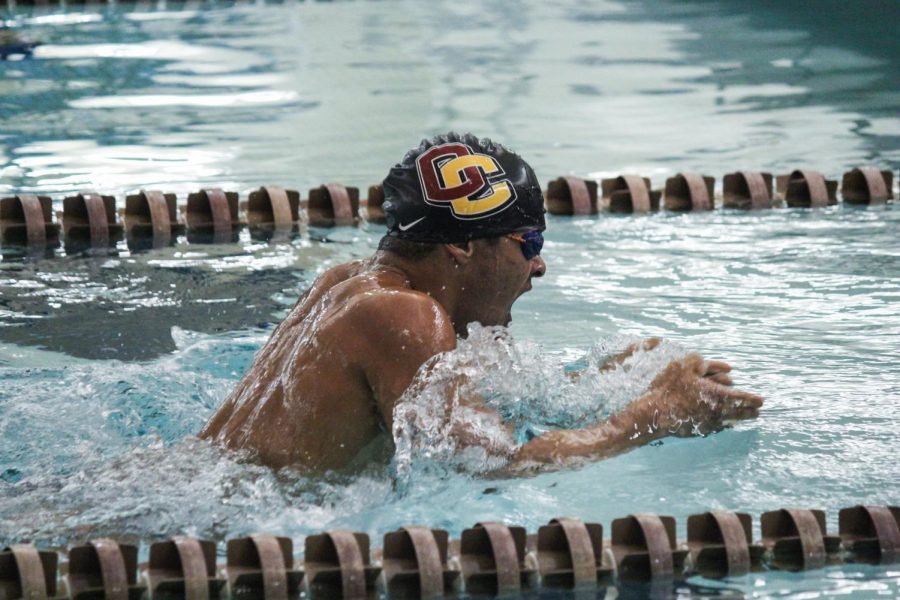 The swimming and diving teams left Case Western Reserve University empty handed, with the men’s and women’s team losing 199–70 and 189–85, respectively. Despite first-year Tesla Waters having a performance worthy of the Oberlin all-time swims list, the Yeomen and Yeowomen were unable to snag a victory.

“Case is a very strong team,” Aquatics Director and Head Swimming and Diving Coach Andrew Brabson wrote in an email to the Review. “The women are 11th and the men are 18th nationally in the collegeswimming.com dual meet rankings. I was proud of how we competed, despite being over-matched and outnumbered.”

On the women’s side of the meet, sophomores Sarah Dalgleish, Devyn Malouf, and Alex Grande teamed up with Waters for a 1:46.73 first-place finish in the 200-yard freestyle relay. Waters, a native of Greenville, SC, saw to a first place finish for the 50-yard freestyle in a career-best 24.70 seconds in the event. Her 50-yard performance propelled her to fourth on the Oberlin’s all-time swims list, and her 100-yard, 54.52-second first-place finish put her at eighth on the same list as well.

Waters remained humble when she spoke to her success, adding that her training has been a challenge.

“I know that list is comprised of many hardworking and talented swimmers throughout the years at Oberlin,” she said. “I’m honored to be listed among them. I’ve spent the past three years battling health challenges and had to take a significant chunk of time off of swimming to deal with them, so I’m pretty thrilled that I’m able to come back to the sport this season and be competitive.”

The Yeowomen saw more success in the 400-yard individual medley, with first-years Molly Marshall and Ellisa Lang clinching first- and second-place, respectively. Grande snagged the third-place spot in the 100-yard backstroke as well, achieving a season-best 1:05.94.

“Despite the score of the meet, I was quite pleased with our performances this past weekend … [but] there are always things to work on,” Brabson wrote in an email to the Review. “We will continue to fine-tune race strategy, technique, and conditioning as we move forward.”

On the Yeomen’s end, the 200-yard freestyle team comprised of first-years Michael Liu, Farzad Sarkari, Xander Lee, and sophomore Matthew Berry secured the first-place spot with a final wall-touch at 1:33.62. A team made up entirely of sophomore students Jack McKeown, Kristoph Naggert, Sean Pawelko, and Michael Lin saw to a 1:43.28 third-place finish in the same medley. Lin, who was awarded North Coast Athletic Conference Player of the Week last season, finished first in the 400-yard medley and achieved a season-best time of 58.92 seconds in the 100-yard breaststroke.

“I had some good swims,” Lin said. “We are pretty deep into the season now, so everyone is worn out and tired going into the meets. This time our team had better results, but I think we could still be tougher towards the end of a long meet.”

McKeown and Naggert followed behind Lin in the 400-yard medley to come in second and third.

As for the diving events, senior Sofia Moscovitz came in second place with a 173.78 score and first-year Laura Young achieved a career-best of 142.58.

Looking toward their next meet at the University of Mount Union and the remainder of the season, Brabson noted that he wants his swimmers to focus on discipline and improvement.

“The main thing that I am looking for is improvement: swimming smarter races, focusing on mental toughness, promoting positive self talk and confidence, tweaking technique, and improving the back half of races are a number of details that we will be looking to improve,” Brabson wrote in an email to the Review. “If everyone continues to work diligently on these areas, the team will experience success.”