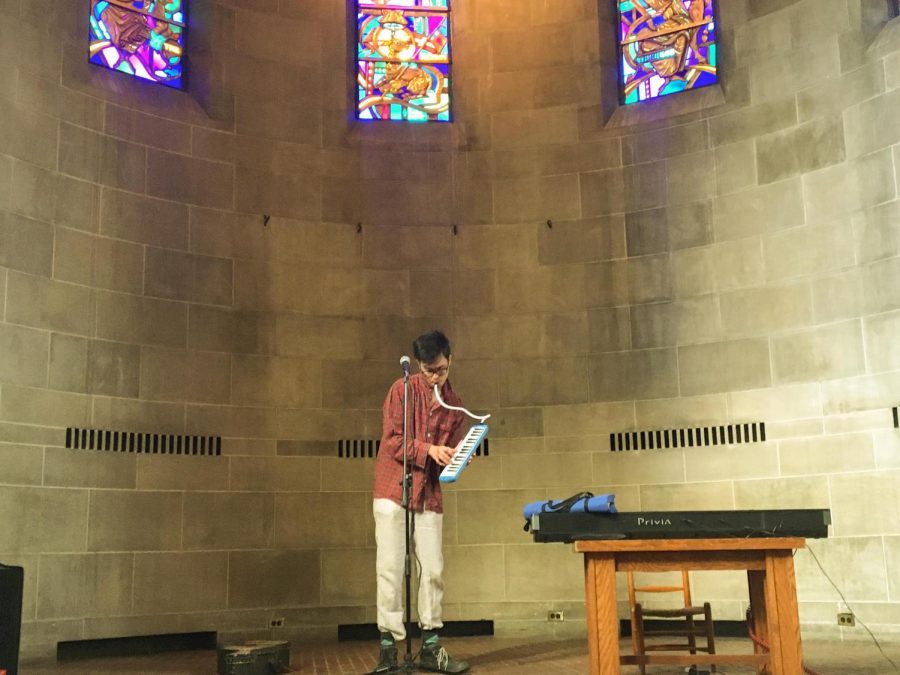 As the audience filed into Fairchild Chapel last Friday night and filled up the pews in groups of twos and threes, a peaceful ambient track filled the space. Viewers murmured with anticipation as they waited for Derick Evans — hosted in Oberlin by the Asian American Alliance — to take the stage. Perhaps people had chosen to see Evans perform because of the eye-catching, color-saturated posters for “In The Chapel” that had appeared around campus, or because they were intrigued by the event’s promise of “experimental pop + performance art,” and an original one-person existential musical that Evans premiered at Sugar City in Buffalo, NY, this year. But from the moment Evans took the stage, he immediately set the tone for an evening that would hinge on the unexpected.

“I want to start tonight with something sort of strange,” Evans said as he opened the show.

As he explained, he was going to kneel down and balance a large black speaker on his head, and from the speaker the audience would sometimes hear him saying words that they should then say back to him. No one would have guessed the words that Evans had chosen — “vroom,” pita bread, and caterpillar — but along with the ambient music and rhythms that Evans had previously recorded, the call-and-response element of the piece constituted a surprisingly interesting, engaging dimension.

“It was very important for me to open up the space and establish an environment that would promote a feeling of community and engagement right at the beginning,” Evans wrote in an email to the Review.

“In performing for an audience, rather than creating a spectacle for others to behold from a distance, I am much more interested in trying to cultivate an atmosphere where any one person in the audience might feel a sense of being part of the total experience and just as important as the performer.”

Before launching into the series of original pop songs that would comprise the first half of the evening, Evans introduced another element to his performance which truly showcased his warmth as a performer. He had looked up the names of the people who had said that they would be coming to “In The Chapel,” and had written out individual dedications for every song.

“I want the audience to know that I see them and care about them — and that others do too!” Evans wrote.

This sense of caring came through in many of Evans’ pop songs, which feature lyrics about love and self-love, with titles like “Thank Myself,” “Warm Light,” and “Everything is Fine.”

Sitting in Fairchild and listening to the first part of Evans’ show, the lyrics weren’t nearly as intriguing as the effect that Evans created. As he transitioned back and forth from piano to guitar — with a few recorded harmonica solos that got big cheers from the audience — each song came across as sweet, catchy, and relaxed. The songs weren’t overly ambitious, and they weren’t a radical departure from most pop music, but they were thoroughly enjoyable.

The musical lived up to all its promise and more — it was a silly, dark, and fun time. Given its premise, there would have been so many ways for it to go badly, but Evans handled all of the emotional nuances with exceptional dexterity. Even the musical’s placement in the evening was a large part of the reason why it was so well-appreciated by the audience. If Evans had not earned our trust with his performance in the first half of the show, the audience might have been too skeptical to go along with his premise, but we already knew that he could make all sorts of off-kilter elements work for him.

This trust made sure that when he took us on a journey to this world — where characters call God and get the answering machine, sing along to commercials on a radio station about hippos, and give hilariously inaccurate frame-by-frame narrations of the movie Up — we gladly followed, delving into a story about how people can uplift each other and themselves from dark places. By the time Evans wrapped up the last song, singing “Take me back to the beginning / Let’s start this over / Let’s make things right,” we were all nodding along.

“I wrote the musical back in August after a friend had asked me to perform at a benefit concert that he’s organized in response to the Charlottesville attack,” Evans wrote. “He specifically said he wanted me to help create a feeling of solidarity. This musical was my attempt to do that. … The musical … presents itself, I hope, as genuinely funny and charming, while also carrying beneath its surface some very dark and very real themes that someone who enjoys the musical can continue to reflect on afterward.”

In his performance, Evans struck a tone of radical hope and caring, which our community, like all communities, can certainly benefit from. If there is anything to take away from Evans’ performance aside from the many earworm tunes, it is that we can all be more deliberate in finding ways to care for and uplift the people around us.