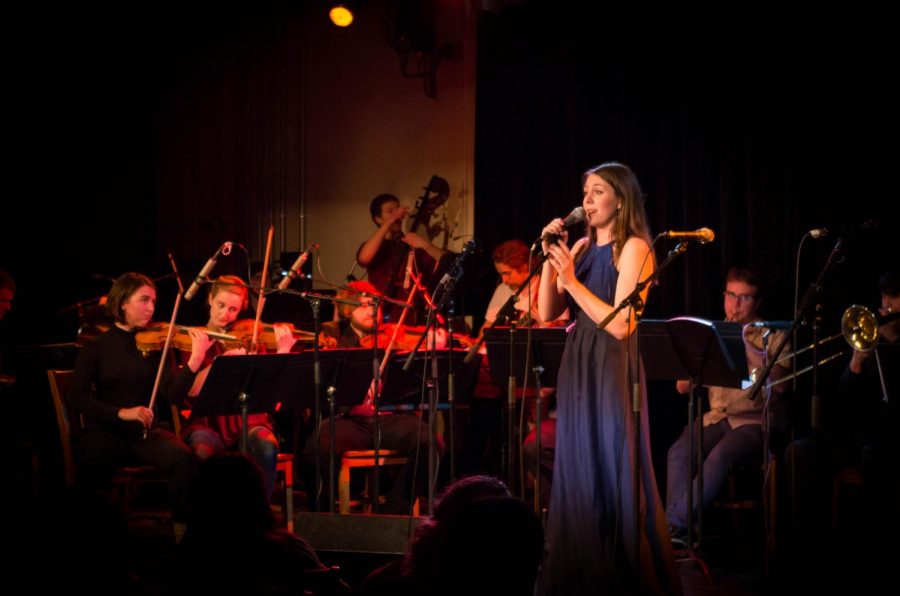 The phrase “It’s Britney, bitch!” — though iconic — seems out of place for the “Britney Showcase” performed at the Cat in the Cream Tuesday night. Directed and orchestrated by College junior and Musical Studies major Alex Ngo, the showcase took a musical theater, opera, and jazz framing to Britney’s music and covered her hits with hyperbolic elegance.

Donning sexy vintage costumes and personas, double-degree sophomore Celine Opdycke and Conservatory first-year Georgia Heers, as well as Conservatory junior Abby Orr and double-degree junior Marina Wright, who was also the assistant director of the showcase, transformed the Cat into a jazz bar worthy of the streets of Chicago for the show.

Instead of the accompaniment that one would normally expect for Britney Spears’ music — a DJ, or a dubstep launchpad — the showcase featured an enormous live band, including several violins, guitars, a clarinet, piano and trumpet, and more.

“There were so many parts to it, so many instrumentalists, vocalists … getting everybody together for run through and getting everything together and wrapped up was probably the hardest part,” Opdycke said.

Despite the impressive training and credentials of the entire cast and crew of the project, it was Ngo’s idea to cover a pop icon rather than his original thought of working with something more traditionally associated with an elevated performance style.

“I wanted to work on a show that was fun and light,” Ngo said. “I came up with this idea of doing a showcase of Britney Spears’ songs with mostly jazz arrangements and some other styles. I just really like messing around with songs and seeing if I can come up with arrangements, so I thought it would be a fun thing to do.”

While focused on the music, the show had many elements of theater, particularly through comedic exaggeration. One song, “Lucky,” was arranged to have a slow, doo-wop texture. In Orr’s performance of “Oops! … I Did it Again,” she transformed the originally upbeat, sassy number into a wailing operatic piece. Much to the delight of audience members, Orr coupled her lament with tragic acting choices such as dramatically looking off into the distance with dewy eyes and wringing her hands together in despair. Her performances were met with laughter and thunderous applause.

“That was the most comedic performance she ever gave,” Ngo said. “She was really playing off the audience’s laughter.”

These extensions to the music were a combination of Wright’s direction and the creativity of the performers themselves.

“I did most of the physical movements and helped choose costumes,” Wright said. “Because I have a theater background and [Ngo] has more of a music background, we decided that I could help with that part of the show.”

As evidenced by an enthusiastic audience who sang, clapped, and snapped along to the music, the showcase was decidedly well received.

“I loved the showcase — there were really funny bits too,” College sophomore and audience member McKenzie Maurer said. “I think the last song was my favourite because it was funny, but it also showcased all of the singers’ talents and the band, and it was just a great finale.”