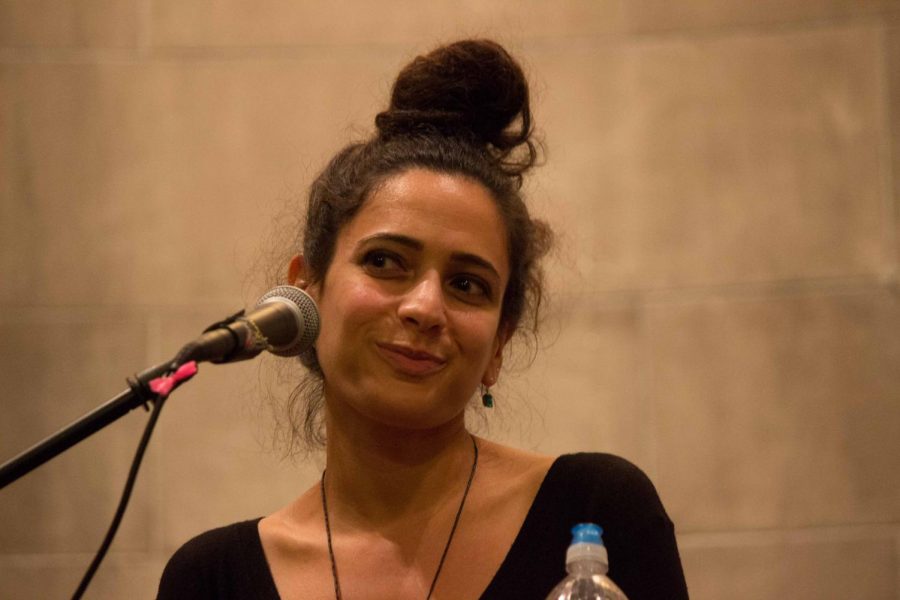 Hala Alyan is a Palestinian-American author, poet, and clinical psychologist, whose work centers around questions of place, identity, and voice, particularly within the Palestinian diaspora. Alyan was born in Carbondale, IL, and has lived around the world in Kuwait, Lebanon, various parts of the U.S. She received her undergraduate and graduate degrees from the American University of Beirut and Columbia University respectively, and then went on to earn a doctorate in clinical psychology from Rutgers University, where she specialized in trauma and addiction. Alyan is the author of three collections of poetry, the first of which, ATRIUM, was selected for the Arab American Book Award. She released her debut novel, Salt Houses, in May 2017, published by Houghton Mifflin Harcourt. Alyan’s visit to Oberlin is part of the continued efforts of Students for a Free Palestine and Jewish Voice for Peace to celebrate and bring Palestinian art and culture into the limelight.

Your work centers around identity and its relations to place. What does home mean to you? How has this defined your identity?

When I read Salt Houses, I was struck by the idea of voice and who is allowed to have one, in both the Palestinian diaspora and other communities and societies. Do you ever struggle with writing with the voices of other people? How do you address this?

It’s definitely something I try to be really mindful and conscious of. Speaking for groups that are more marginalized than myself — refugees, or people who are currently living in camps … it’s always [difficult] because coming from a place of privilege you don’t want to use that platform in the wrong way. I think of using privilege appropriately as taking it and using it to amplify the voices of people who don’t have it. In terms of writing, I did a lot of research. I made sure I had primary and secondary sources and did everything in my power to feel like [the people I was representing] when I was taking on a particular persona or character. I was very careful not to do that unless I really understood their motivations and had spoken to enough people who mirrored the experience of the characters to feel like I did the best I could do to capture them in an appropriate way. I think it’s also important to note that [Salt Houses] is a book about an upper-class Palestinian family, because it is a luxury to get to leave; it’s a luxury to have passports and financial resources. So in that sense I did try to be really conscious of telling stories that I felt comfortable answering for.

What similarities and differences do you see between prose and poetry? How do you pick one or the other for a situation?

For poetry, it’s a lot more of a free-flowing thing. I wait to be inspired, and it doesn’t require a lot of discipline for me. I just sort of write poetry when I feel like writing poetry, and that’s it, whereas prose requires much more discipline. I do 30 minutes a day. There’s a lot more instant gratification with poetry because you have the product directly after doing the work, whereas with prose you just kind of work and work, and you plod along, and it may come to fruition and it may not. There are a ton of fiction writers who will tell you that there are a lot of projects that never see the light of day. I try to think of it all as practice. But it’s definitely a lot more of a regimented process for me with prose.

How are performing poetry and spoken word incorporated in your writing?

I think performance in general makes me pay attention to musicality and rhythm in a way that I didn’t before as a writer, so I do think that I have a little more of a honed ear now for things like dialogue and for how some people come across aloud. I never used to think about that before I started performing.

I guess one way of answering the question is to say this: I definitely believe that artists have a massive role in dissent and protest and amplifying the voices of populations that are marginalized or who are silenced. I don’t think it’s a coincidence that in times of great oppression there’s usually wonderful literature, wonderful music, wonderful comedy. You’re seeing it now in the era of Trump. These are not coincidences. Particularly in the Palestinian community — or in my case the diaspora — this is a community that is so politicized, with or without the consent [of the people] — to even say you’re Palestinian is an explicitly political statement — and so because of that, art in a lot of ways can lower a person’s sensors. Saying something is a story — it’s just a story, it’s just a novel — that, for whatever reason, makes it a little more digestible for audiences. That’s true for films too. Narrative films versus documentary films. There are a lot of movies that people will watch because it’s cinema, it’s a story, it’s fiction, and that can be a really wonderful and impactful way of communicating a narrative that’s not heard very much to a wider audience.

In my case, getting picked up by a big publishing house was not something I saw coming and I’m very grateful for them because I do think that expanded the readership, but I also think something about it just being a novel about a family [made a difference.] There are ways in which that sort of [fictional] language around it allows for people [to accept the story and learn something.] I’ve gotten a lot of emails from white people in the Midwest who have written to just say, “I had no idea that any of this was happening, I had never heard the other side of this, it never came across to me.” And they may not have ever really come across it if they’d just relied on news reports or other mediums of information that are being communicated, whereas sometimes art can be a way of changing minds. I think it’s effective because a lot of people are not expecting it.

Is there anything you’d like to add about your performance at Oberlin this week?

I’m so excited. Oberlin has a wonderful, long-standing tradition of protest and art and the intersection of the two and so I’m very excited to see [and] meet a little bit of the community. I’ve never even been to Ohio.