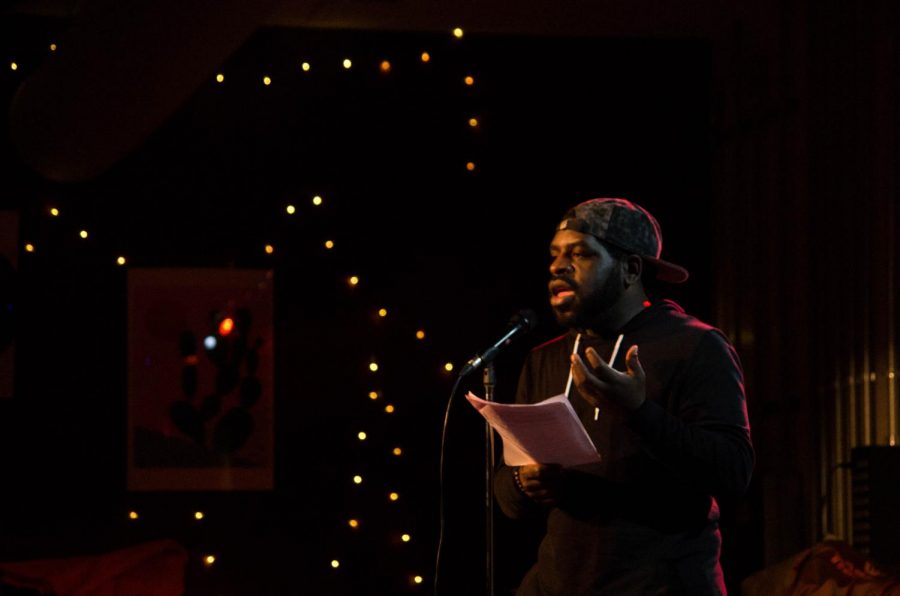 Slam poet Hanif Willis-Abdurraqib performed a selection of witty, unusual, and energetic poems at the Cat in the Cream Monday night.

“I think public affection is one thing that will save us — as long as it’s, you know, consensual with the person who is also down to be publically affectionate with you,” poet, cultural critic, and essayist Hanif Willis-Abdurraqib said Monday. “Please clear that hurdle first.”

Willis-Abdurraqib, who has been published by The New York Times, Pitchfork, The New Yorker, and The Fader, as well as poetry journals such as Muzzle, Vinyl, and PEN American, writes about grief, joy, and heartbreak with finesse.

“It’s been a weird — I want to say year — but life perhaps,” Willis-Abdurraqib said. “Because the one thing that is certain is that I will be distraught and broken-hearted and upset by the news or the world. But what isn’t promised is that I get to do more nights like this, and I get to hang out with people like you all, and I get to write poems and read for people who care about words. That means so much to me.”

An embodiment of wit, charm, and all-around charisma, Willis-Abdurraqib proved himself one of the most beautifully unusual poets to ever visit Oberlin. Every poet who performs at Oberlin brings a great energy and talent to the Cat in the Cream. Very few poets have invited the audience to sit around the stage with him, share a reading, then discuss vulnerability and the anxieties of young writers.

“Sitting on stage with him and seeing his famous bomber jacket that says ‘Ohio against the world’ was so special,” OSLAM Co-President Hanne Williams-Baron said. “I think he does so much to bring his readers into his home. To turn the lights on, say come sit with me and read together is really important and does not happen a lot.”

Willis-Abdurraqib’s performance spanned from the painfully serious to lighthearted and was inundated with pop-culture references weaved in throughout. His mother’s death, the struggles of being Black in the U.S., and conversations with the ghost of Marvin Gaye were just some of the subjects Willis-Abdurraqib touched upon. Lines from his new manuscript, such as “Everyone who thinks of death as a peaceful place is still alive,” or “Your mama so Black she will carry you in her teeth to the river and hold you down until you become either holy or dead,” from the poem “The Ghost of Marvin Gaye Plays Dozens with the Pop-Charts” left the audience murmuring “woah” into an otherwise stunned silence.

“He was such an engaging personality in a sort of understated way,” College sophomore Anne Schoonover said. “He had a lot of charisma and his poetry drew a lot of connections which were not obvious. It was really striking to hear him talking about the poem and then reading the poem and seeing the way that those two things connected in unexpected ways.”

Perhaps even more valuable than his poetry was the stellar advice he gave budding writers after the show. His counsel showcased what he seems to use in his poetry: the dichotomy between heavy and light content, and the equal importance and respectability of both.

“I think a blocking point for many writers and poets specifically is that they imagine the shit they consume everyday isn’t worth stretching into something vital and important,” Willis-Abdurraqib said. “I think a tree poem and a Teen Wolf poem are equally important. I think the poem about my mother’s death and Alicia Silverstone in Clueless are on the same level because they’re just windows to what I’m actually trying to say.”

Through his brilliant translation of the seemingly mundane into profound poetry, Willis-Abdurraqib validated and sought inspiration from pop-culture and the works of other artists through his poetry, such as in his limited edition chapbook Vintage Sadness.

“Vintage Sadness is [a compilation of] a lot of poems prompted by songs I didn’t know were about sex when I first heard them,” Willis-Abdurraqib said. “All poems are named after the songs that inspired them. This poem is called ‘Girl on Film’ — it’s named after the Duran Duran song ‘Girls on Film,’ which is about pornography, though I once thought it was about literal film. I was just like — I too enjoy talented actresses.”

As a columnist for MTV News, he advocated for mainstream media consumption and made the average pop-culture guzzler feel less ashamed of their interests. Willis-Abdurraqib commented that he wants to dissolve the confines of genre, unashamed to consider the possibility of his works’ likeness to fanfiction.

“On its face I don’t think my work is fanfiction, but by pure definition I think [it might be],” Willis-Abdurraqib said. “But I’m also attempting to do away with the idea of genre [and want to] instead be governed by the fact that often I am wrong and need to find my way to answers. Sometimes that’s by writing a poem, sometimes by an essay, sometimes pacing around my apartment and speaking out loud. I don’t even know if I’m trying to find answers; I’m trying to find ways to discuss my wrongness in a more eloquent manner.”

Perhaps the most important message Willis-Abdurraqib left the audience was to celebrate even the smallest literary successes to acknowledge one’s privilege to even have the opportunity and ability to be able to express one’s opinions through words.

“Celebrate your sentences,” he said. “Celebrate your finished poems or books or whatever, sure, but also celebrate your metaphors, your images that you can bring to life on the page. Writing is rooted in celebration. … What a gift to be able to write, to have the tools, at least for me, that my ancestors didn’t have. I have to really honor that by … finding ways out of fear as quickly as possible.”

Hanif Willis-Abdurraqib can be found on Button Poetry and has just released a collection of essays called They Can’t Kill Us Until They Kill Us, alongside his book of poems The Crown Ain’t Worth Much, both of which are available on his website.