In the Locker Room with Tess Jewell and Emma Schechter, OCET, OCDT Captains 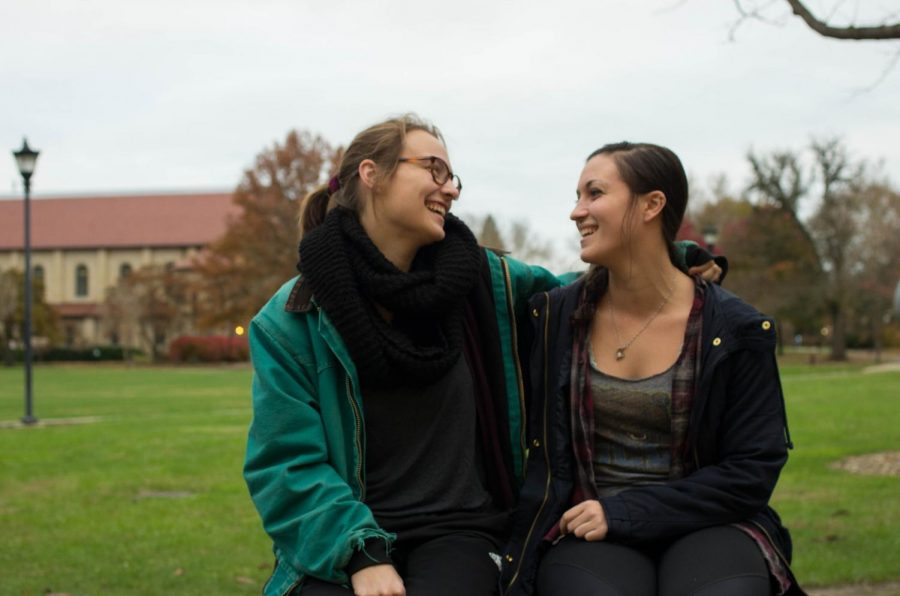 This week, the Review sat down with seniors Tess Jewell and Emma Schechter, captains of Oberlin’s Dressage and Equestrian teams, respectively. As they near the end of their four-year careers, they reflected on how the program has flourished in their time here, as well as the hectic schedule that comes with riding at Oberlin.

How did you end up joining the Dressage and Equestrian teams?

Tess Jewell: I’m the captain of the Dressage team, but I also compete on the hunt-seat and Western Equestrian teams. I started riding when I was seven years old, and I ended up just riding English for a while. I went to an eventing barn, which is where I started dressage. When I visited Oberlin, I met the coach, and that was a big part of my decision to come to Oberlin: Because I liked the coach of the Dressage and the Equestrian teams, and I just wanted to continue what I’d been doing since I was little and had always been a big part of my life.

Emma Schechter: I’m the captain of the hunt-seat and Western Equestrian teams. I also started riding when I was seven, and only ever did hunt-seat until I started Western here. For me, a big part of schools I looked at, they all had Equestrian teams and they all had club teams, but I really didn’t want to ride varsity. I met Coach Ric [Weitzel], and that was a huge deciding factor for me.

What is the history of OCET here at Oberlin?

TJ: Well, it’s always been really small, and it really hasn’t grown until the past few years. Before our first year here, there were only two people on the team, and now there are 40 people on the team; 45 if you’re looking at Equestrian and Dressage.

ES: I think the big influx started our year. There were eight of us. Only three or four of us are still riding, but we’ve had, for the past two years, an increasing amount of first-years.

Considering your sports can be difficult to organize and have such a rigorous schedule, do you ever feel like it’s a challenge being just a club sport, and not a well-funded varsity team?

ES: I think for me the big thing is getting people who play varsity sports to take us seriously. One thing I’ve noticed is that people spend a lot of time talking about how much they put in to their varsity sports, which is true, but we’re also a full-year sport who has had a show almost every week this semester. We ride in the cold, we ride in the snow, and that’s definitely something we have to explain to people here.

Does everyone on your team have riding experience before coming here? Is it hard to recruit people who are new to riding to such a niche sport?

TJ: A lot of people actually come to the club sports fair in the fall who have never ridden before, and they see us standing there with the horse, and they’re just like, “Oh my gosh, I want to learn how to ride a horse.” We actually have an athletics class that our coach teaches, and a lot of people on the team actually started by taking the athletics class and learning the basics and then signing up for lessons on top of that. Luckily for us, the barn is only a mile away, so it’s pretty easy if people want to try it out. Some other schools have a 45-minute drive, so it’s [much more] accessible for people [here].

How has your season been going so far?

ES: We’ve had a show every weekend this month.

TJ: Between [the] Equestrian and Dressage [teams], there’s been a show every weekend, but for the people who don’t show dressage, they’ve had a couple weekends off. Pretty much since the end of September, the only weekend we’ve had off was this past weekend. We actually compete against Division I varsity schools, such as the University of Findlay and Lake Erie College. The Dressage team competes against Otterbein University, the University of Kentucky, and Miami University of Ohio. Oberlin has a club team, but we’re all part of the Intercollegiate Horse Show Association, so just because it’s a club team at our school, it’s a varsity team at other schools. For Findlay, the school pays for everything: their lessons, their food at the shows. We’re really fortunate that Oberlin pays for our entries and our hotels and cars. It is interesting sometimes, because we show against schools where these students are majoring in horse-back riding, and two weeks [ago], the hunt-seat team placed third at the show: right up there with the varsity teams, which is super cool.

What’s on the horizon for OCET and OCDT?

ES: We have a meet this weekend at Stonegate Farms in Coolville, Ohio, which is about four hours away. It’s one of my favorites of the season. It’s not particularly special in terms of its significance — we don’t have anything major until regionals in the spring.

TJ: But we are hosting a home Western show on Dec. 2 at our barn that hopefully a lot of people from campus will bus over to, and we’re hosting a show on March 10 in the spring.

Correction 11/18/17: A previous version of the headline for this story incorrectly spelled Emma Schechter’s name. The error has been corrected.