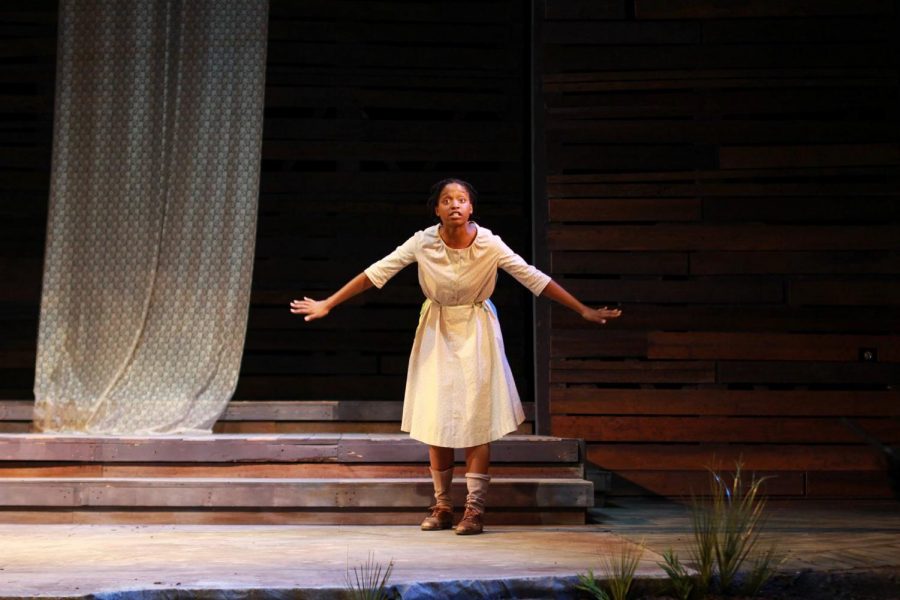 The Bluest Eye, Lydia Diamond’s stage adaptation of Nobel Prize-winning author Toni Morrison’s 1970 novel about a young Black girl who prays for blue eyes, opened last night in Hall Auditorium. The production, directed by Associate Professor of Theater and Africana Studies Justin Emeka, OC ’95, is a richly textual and musical experience that tests the boundaries between prose and stage. One of the reasons that this play is especially resonant with Oberlin communities is that The Bluest Eye is set in Depression-era Lorain, Ohio.

“Toni Morrison — she’s a genius,” said College sophomore Miyan Byers, who is responsible for dramaturgy, sound design, and video production for The Bluest Eye. “This sort of story is not something that you get the opportunity to tell all the time, or even the space [or] the resources to tell it. So I think it’s a heavy story, but it’s one that needs to be told, and I think that people should see it. It’s going to make people confront a lot of things — a lot of painful ‘whatevers’ that they are dealing with in their life — but it’s something that people need to see, and I think that healing will be done by it.”

Diamond honored Morrison’s writing style by incorporating long, prosaic monologues that revel in the language as much as in the storytelling.

“In our household there was love,” the character Claudia says early in the play. “Love from Mama and Daddy, thick and dark as Alaga syrup. I could smell it — taste it — sweet, musty, with an edge of wintergreen in its base. It stuck, along with my tongue, to the frosted windowpanes.”

One of the prevalent themes in the script is the way that beauty is represented in popular media. The script specifies that Pecola, the main character, wants to have “blue eyes like Shirley Temple, or Mary Jane, on the Mary Jane candies. Or Jane in the primer at school,” and she “fawns over” a white baby doll that belongs to Frieda. Frieda and her sister Claudia serve as narrators for much of the production, as well as characters within it.

“We talk about things like representation, but also I think it’s about common sense and sensitivity, especially to people and experiences that are not usually shown in mainstream society,” said College senior Yemko Pryor, who plays Frieda. “I think this is what this show is showing — that it’s important to give voice to those kinds of characters and those kinds of experiences, because if they’re ignored then [their pain and] struggle isn’t … outwardly experienced. It’s just internalized, and can therefore be destructive.”

Musical Director Caylen Bryant, OC ’17, also discussed how the overemphasis of certain narratives of attractiveness and success in the mainstream can have severely detrimental effects on people who do not conform to white European beauty standards. According to Bryant, the play draws out these themes in particular, as it slowly unfolds the ways in which Pecola is harmed by a society that does not consider Black girls to be beautiful.

“It really speaks to how someone experiences the effects of otherness, and how that can really wear down on a person, wear down until they’re worn out,” Bryant said. “The main character spends the whole story just feeling unloved and put down, and in addition to that, she is not really helped by anyone. So many things are pitted against her. And she finally, towards the end, kind of breaks down. I think it’s important to tell the story, so that people can prevent this type of effect before it happens.”

Bryant’s music direction, in collaboration with Emeka’s direction, pulled elements from the script and wove them into an auditory narrative component to complement the action taking place on stage. The script is already musical — often specifying that characters should be singing, and making reference to instruments — so Emeka chose to bring that texture to the forefront.

“There are two characters who simply narrate the play — Claudia and Frieda — and [Justin Emeka] came to me and proposed the idea of me being an auxillary sister,” Bryant said. “Because I’m also narrating it, in my own type of way. I wrote a few themes. Justin also came to me with a list of songs that he had in mind.”

According to College sophomore Jaris Owens, who plays Pecola’s father Cholly Breedlove, the themes that Morrison brought forth in her writing are still resonant here in Lorain today.

“Racism … happens all the time,” Owens said. “It’s so subliminal, and it’s so ingrained, but it affects people’s lives in a very dramatic way. I think that’s what the play is getting at. This play is not a one-time thing. It’s very much a representation of things that happen all the time.”

In a play that focuses very closely on the dynamics of familial relationships, the intergenerational ramifications of discrimination and trauma come to the forefront of the narrative.

“The takeaway would really be … pathology — the ways in which people pass on their pain and the hurt that’s been done to them or the harm that’s been done to them,” Byers said. “Especially in this context, we’re talking about racism and what that does to generations and generations of Black people, but also looking beyond that fact. I think something she’s asking is, ‘How do we look past these things that have happened to us?’ … ‘How do we take off these shackles of generational pain, this legacy that started in slavery?’”

The Bluest Eye will have more performances tonight and tomorrow night at 7:30 p.m., and Sunday at 2:00 p.m., in Hall Auditorium. Tickets are available through Central Ticketing Services.