In The Locker Room with Eliza Poor and Tristan Clonch, Club Soccer Captains 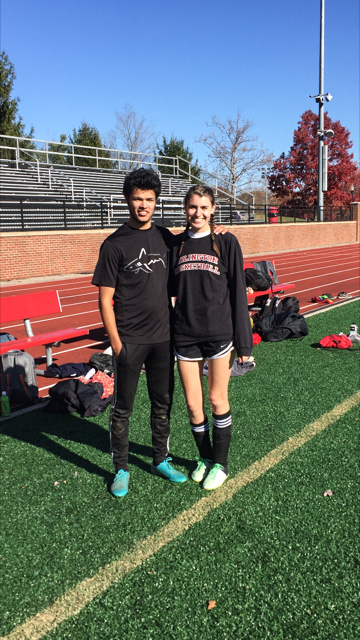 This week, the Review sat down with club soccer captains and college seniors Eliza Poor and Tristan Clonch, both of whom have been members of the team for their entire Oberlin careers. We discussed the team’s culture, sense of community, and overall inclination towards prioritizing a fun experience for all its members.

How and when did you get involved with the club soccer team?

Eliza Poor: We both got started on the team during our freshman year. I was playing soccer on North Quad with friends during orientation, and the then-captain approached us and invited us to play. That’s how I started out — it was really simple.

Tristan Clonch: It was the beginning of freshman year, so I hadn’t really given soccer much thought yet. But a friend was going to the club fair and told me to come with him, and he ended up introducing me to the club soccer team. I sort of just went with it.

What is the difference between club soccer and intramural soccer at Oberlin?

Has soccer been a big part of your lives? What made you want to play soccer in college?

TC: Growing up, I went to a private school, so I played both within my school and outside of it. I went to some camps, but in the end, decided not to try to get recruited. When I came to Oberlin, I knew I didn’t want to play on the varsity team but that I still really wanted to keep playing soccer, and club soccer was so fun that there was never a reason to stop playing.

EP: I’ve been playing soccer since second grade, both inside and outside of school. I definitely wanted to focus more on academics at college, and I anticipated the varsity team would be a huge time commitment. I wanted a good in-between, and club soccer has been perfect for that.

As a year-round sport, how does club soccer manage to retain its players?

TC: We don’t really need to try that hard, honestly. As a team, we definitely encourage people to try to be as committed as possible, but we also understand that for us, soccer is a secondary activity. No one is receiving credit or payment or anything — we’re just trying to have fun, and we want to cultivate an environment where people just want to come. Sometimes it can be hard, especially as captains, to not really get anything in return for all the work we put in, because we’re always busy organizing stuff, transporting equipment, and delegating many tasks. It’s been a lot of work, but it’s so worth it. I look forward to it every day.

What is the atmosphere of the club soccer team?

EP: As a team, our biggest goal is to foster a community that exists not just in soccer but outside of it as well. The upperclassmen on the team try to be role models and be accessible for teammates to come talk to if they have any questions — not just about soccer, but anything at Oberlin.

TC: Our team is so full of different types of people, because we accept literally everybody from the start. In the beginning of every semester we have returning players, new players, people who have played soccer their whole lives, and people who just want to try soccer for the first time. It can be hard at first to facilitate a team dynamic, but once we get into the swing of things, it really starts feeling like a family.

EP: The vibe of the team is just like, a lot of people who really love soccer but can’t commit in the same way that a varsity player would. But that’s also where our dedication comes from. We are from all different sectors of campus — we have Conservatory students, science, and humanities students — and we all have a common bond of our love of soccer that brings us together and fosters a different community that’s separate than ones we might have that are related to our academics or other extracurricular activities.

What events and tournaments has the team participated in this year?

TC: One of our team members is a liaison who organizes games with other club soccer liaisons from other schools, actually. Since our team is 100 percent student-run, we have to organize our own games and transportation, so it’s a really important job. This year’s liaison is Jane Agler.

Out of all club sports, yours has the most cross over between club and varsity athletics. Why do you think that is?

TC: Since the varsity teams’ seasons ends pretty early, often the seniors will sort of trickle in after it’s over. Same with many fifth-year students who have already used up all their eligibility to play on the varsity team. Sometimes, people either quit varsity to play with us or leave us to play varsity. It makes sense, though, because soccer is such a common sport to grow up with, there are so many Oberlin students with varying levels of experience who want to try out different ways to play in college.

What’s coming up in the future for the club soccer team?

TC: Right now, we’re transitioning into our winter indoor league in the field house. We’re not going to have any games, and instead we’ll focus on the upcoming indoor intramural league, which mostly consists of club soccer players — we make up about four out of the six teams — but we encourage other people to join too, because we love playing other people. It’s more of a transition period for us, and when we get back to school and it starts getting warm again, we’ll go out on Bailey field and practice there as a team. We’re trying to set up more tournaments in the spring, because that’s our main season and usually when we have our real, big tournaments of the year.

EP: We also like to do social events for the team a lot, too. Around Halloween, we all went to a haunted house together, and we’re doing a “secret snowman” gift exchange before the semester ends. We really like to stick together.