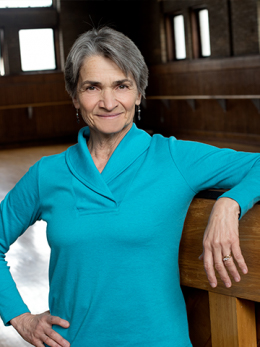 Nusha Martynuk has taught at Oberlin since 1988, when she and her husband, Carter McAdams, joined the dance faculty. She completed her undergraduate degree at Temple University and was a member of Zero Moving Company, the CETA-funded Artists’ Project in NYC, and the Nikolais Dance Theatre. She and McAdams founded Partners Dance Company together.

As listed in the program for CHANT — her upcoming and final show at Oberlin with her husband before their retirement — Martynuk has received numerous awards for her choreography, including from the National Endownment for the Arts, six Choreography Fellowships from the Ohio Arts Council, the Cleveland Arts Prize in Choreography in 1999, and the OhioDance award in 2010.

CHANT will open with Night Clumsy, a piece originally choreographed by McAdams in 1995. There will be two improvisational works performed by Martynuk’s students, sandwiching Still Happening, a combined duet and septet choreographed by Martynuk that highlights the experience of refugees through the lens of her mother’s journaling. The show will close with The Habit of Warmth, a short duet between Carter and McAdams as they perform as Oberlin faculty members one last time.

Can you talk to me a little bit about your dance career in general, but also specifically at Oberlin and what that’s been like for you?

Well, it spans 45 years, so it’s hard to talk about it as one idea. … In my later years, I started to really enjoy the fact that I became very aware that I had begun dance when there was a thing called modern dance. When I was living in New York City this thing called postmodern dance came to be, and I was smack there in the city when that was happening. Now we’re in contemporary, so I’ve been doing this through three cycles. I feel very fortunate because they are very different, one from another, and I just came in on the tail end of one and then lived through a second one without really participating that much. But it was interesting to sort of see what my take on it was and whether or not I was going to want to participate in it. Then I moved into these beginning stages of this new place we’re at called contemporary dance. So my career spans all that, and throughout my career I’ve always been interested in choreographing as well as performing.

It’s especially interesting when [I] teach choreography because that process makes me look at my own work from a very different point of view. I’m teaching people how to make dances but [it’s important] for them to know … something of the historical background of what came before where we’re situated right now. While I’m teaching and talking to them about that, of course it makes me think very much about where I situate myself in all of that. So I watched in postmodern dance a very different take on what it is to construct material and while I didn’t embrace everything about postmodern dance, I certainly was influenced by it and allowed my own research as a choreographer to shift throughout that period. When contemporary dance came into being, I find that in many ways it’s very liberating again because I think that it allows for the presence of so many different voices and technical backgrounds that a choreographer can once again reach into their own truth of what movement is and their own background — who they are and what they have experienced, both in dance and in the world — and bring that experience to this contemporary world. So I’m very at ease about this whole contemporary shift. I felt like I could reach into it and allow it to resonate within me more so than I could postmodern dance.

What does it mean to you to be both a choreographer and a performer, and how do you approach those roles?

Let me talk about the performer role first, because I love being a performer — not because I love being on stage so much, but rather [because] I love the process of learning your own work or someone else’s work. Some dancers are all about loving to be on stage and some are all about loving to be in rehearsal … I love the creative process … I love striving to provide … the vision of the choreographer. I also really enjoyed that to me dance often felt like a really athletic act. You know, dancing is an athletic act, and I tried to be true to that for as long as I could. It’s a little harder now. Actually, I would say that in all honesty I probably stopped performing consistently 12 years ago, so actually doing this concert is re-engaging with performance and I think I’m OK with that right now … so that’s the performance part. And the choreographer part — I’ve always felt, even when I was an undergrad, that I wanted to make work. I think it’s similar in some regards to what I said about performance, and that is just that I feel most alive when I am engaged in making something, whatever that is. In particular, when you’re surrounded by collaborators who are working with you and supporting that … that feels like a huge gift.

How do you use improvisation as an entrance point for choreography, if you do, and then also what does improvisation mean to you as its own form for the purpose of performance?

I’ve gone through a lot of different stages of working with improvisational performance. One of the things that is consistent with [improvisational performance] is that as something presents itself to you, you want to understand what that is physically and see if it suggests something to you in some other way as well. Is it a metaphor? Does it suggest some way of being or way of feeling? You’re doing all this while you’re in motion, so you’re not making decisions about what you’re doing in the dance. It’s more like while you’re moving forward, you’re giving yourself a chance to assess what just happened so that you can hold onto it. When you do move forward, you start to build off a little vocabulary in hindsight so you can build it into an improvisation. Even though it’s improvisational, it has structure and it has an integrity of its own.

I really enjoyed working with the students this semester in improvisational performance, because we pretty assiduously stay away from working intensively with any kind of structure but rather really [learn] to do that assessment of “Alright, so how…do we find a common ground and persist in this moment and develop it?” I think they’re doing some really beautiful work and that’s really fun to watch. The musicians have been with us throughout, which is a real blessing.

I think the second thing you were asking is how improvisation contributes to creating work … the strongest method I would employ is working with the dancers and giving them very strong prompts in terms of what I’m looking for, but then letting them improvise to those prompts to find material that they determine — because they feel like they know it, they understand it, it came from them.

To me, one of the really interesting things about choreography isn’t about generating the movement so much as it is about the way in which you create a larger structure in which that movement exists. How different components, as you can see in the long dance today, appear, reappear, insist on being seen again, alter themselves, [and] change their dynamic … Once the movement is created, there’s so much you can do with it.

What inspires you to make dances? Where do you think your choreography comes from?

It seems to me that every time I settle on something I think is worth pursuing, it’s because a number of strands come together at the same moment. I think we all have these experiences where you get an idea and you go, “Oh, that’s such a great idea,” and it really comes to nothing because it’s an idea, it’s one thing. But when many different thoughts come together, and all these strands start to weave together; I think that’s when the piece starts to insist on being made. … I think what’s really interesting about making work and choreographing is, because you choreograph in the moment, with people, you never know where it’s going to go. I watch my students do this, and I tell them it’s going to happen — very often, you think you’re going to make a piece about this, but as you’re making it it takes its own direction and creates its own logic, and your job is to follow that direction and that logic, not force it into a different place that you thought you were going to be, and as that happens you discover a lot about what was really brewing somewhere deep in your mind. And that discovery is always surprising and always interesting. You asked, “Why do you keep choreographing?” Because it … unveils things that you’re not even conscious of. … You learn something about your subject, yourself, and your take on the subject.