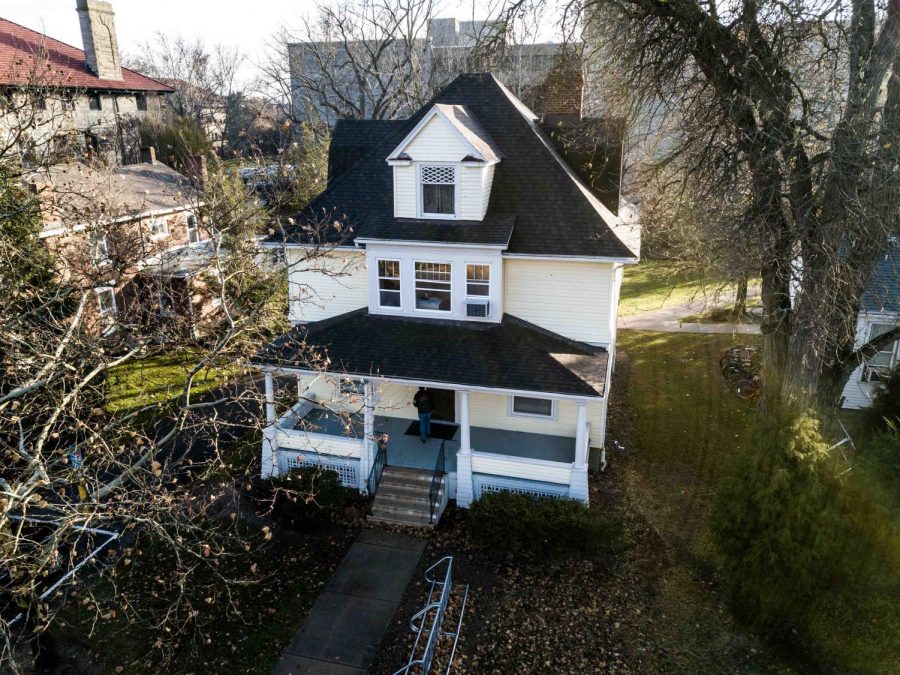 The building housing the Creative Writing program on West Lorain Street. The department lost a tenure-track professor when he unexpectedly resigned Nov. 16 after sexual misconduct allegations came to light.

Associate Professor of Creative Writing Bernard Matambo resigned Nov. 16 amid multiple accusations of sexual misconduct toward students. One such former student has recently filed a Title IX report against him.

Another former student, Sarah Cheshire, OC ’14, wrote Unravelings, a memoir that details a series of inappropriate encounters with Matambo, referring to him as “B.M.” and “Professor X” throughout. Several individuals cited that the book, published by Etching Press at the University of Indianapolis this May, inspired a former student to come forward and share her own experiences with Matambo, suggesting a pattern of misconduct.

The book, formatted as a 25-page memoir, touches on themes including “memory, gender-based trauma and emotional gaslighting,” according to the prologue.

“In crafting this narrative, my intention is not to seek retribution or cast blame, but to delve into the intricate psychological landscape of a relationship imbued in both intimate creative energy and deep power imbalance, … how we as storytellers construct and reconstruct truth through narrative, and the ways in which accountability can become complicated through our manipulations of memory, both those advertent and those inadvertent,” Cheshire writes in the text.

English Professor and Chair of the Creative Writing Program Desales Harrison announced Matambo’s resignation to students in an email Nov. 20. It only detailed that Matambo had “resigned abruptly.”

Harrison said that the sparse details in the email are due to legal limitations on what information can be shared, adding that the College faculty and staff will likely be unable to comment on the issue.

“The constraining force is not one of institutional policy as it is one of state and federal law that governs the kind of disclosures that schools can make — the kind that schools are obligated to make,” Harrison said. “One way or another, whether it’s external legal constraint, just an ethical call, or a college policy — I don’t think that students are going to receive any particularly satisfying official narrative any time soon.”

Matambo joined Oberlin as a visiting assistant professor in 2007. As his initial six-year term approached its closure in fall 2013, a number of students and faculty, including Cheshire, established a petition requesting his retention. Matambo was granted a tenure-track position because of these efforts.

In light of Matambo’s initial popularity, the silence from the College has left students like College senior and Creative Writing major Mia Park confused and distressed upon learning of Matambo’s abrupt departure.

“It was really alarming because it was phrased like, ‘Bernard has resigned suddenly,’ with no other information, … so we were all really worried that something bad had happened to him,” Park said.

Park added that once she and other students heard rumors about Matambo’s sexual misconduct, they were no longer sympathetic.

Cheshire said that she hopes her book and Matambo’s resignation can serve as a tool for change within the Creative Writing program and Oberlin as a whole.

“I did not publish that book with the intention of launching a crusade or calling anyone out,” Cheshire said. “I think I published it more as part of a personal journey I’ve been on to figure out what happened, … given that so much of that has been me trying to figure out who I am as a writer independent of him. I think it’s important that the book be taken not as a rallying cry, but as a work of art. I think that this is a moment not just for the department but for a lot of people to reflect and change.”

Cheshire tied her experience to the recent #MeToo movement that swept across social media in recent weeks and the watershed of men in power that have been accused of sexual harassment, assault, or misconduct.

“I had never defined it as part of that culture; I think it was always a, ‘This was complicated and I’m mad,’” Cheshire said. “I had this moment where I felt like I had to define this as part of that collective consciousness.”

Since Matambo’s resignation, his advisees, senior capstone projects, and classes have been distributed among the remaining Creative Writing faculty.

Park said that the shakeups have left her and other students in the program feeling unsettled and let down.

“The future in the department feels a little uncertain,” Park said. “I’m feeling kind of betrayed and hurt because I trusted him with a lot of information, and I feel like having this happen means I have to reassess all the kindness that he’s given me.”

Despite the uncertainty, Harrison assures that maintaining the program is a top priority.

Dean of the College of Arts and Sciences Tim Elgren added that the administration hopes to mediate any complications Matambo’s resignation may cause to students in the Creative Writing program.

“Students should rest assured that every effort is being made to meet the needs of creative writing students and advisees,” Elgren wrote in an email to the Review. “Visiting faculty members will be hired as searches are initiated to fill permanent openings.”

Matambo’s departure adds to the Creative Writing department’s consistent stream of faculty losses over the last year. Last spring the department lost one of its tenured faculty members with the departure of Shane McCrae, whose position has been replaced by a visiting professor.

The impending departure of Delaney Professor of Creative Writing Dan Chaon — who will be leaving at the end of the year to turn his bestselling novel Ill Will into an HBO series — will leave the program with only three core faculty members next semester.