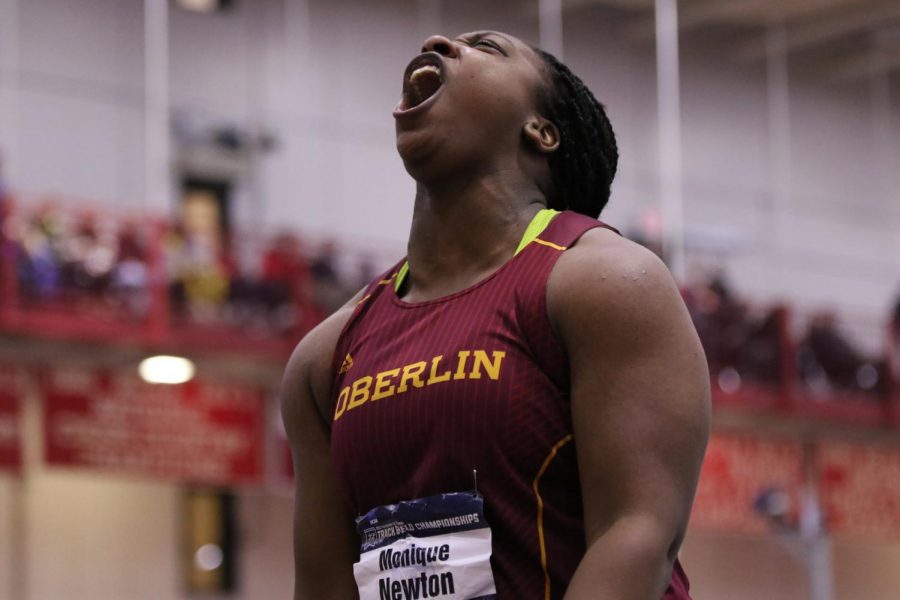 After capturing the North Coast Athletic Conference Indoor and Outdoor Championships for the first time in school history last year, the Yeowomen picked up where they left off last weekend by winning the Fifth-Annual Spartan Holiday Classic at Case Western Reserve University. The men’s team, which was not as dominant as the women’s last year, began their asscent as they finished second in the meet.

Monique Newton, Ana Richardson, Naeisha McClain, Jasmine Keegan, Maya English, and Cecelia Longo demonstrated why they’re considered one of the best female throwing units in the country as they earned 45 of the team’s total 155 points.

“They’re the most talented group of women’s throwers in the country, and they embrace that challenge and use it as motivation to continue to raise the bar,” Hepp said. “More importantly, though, is how much they care about one another and genuinely want to see everyone in the group be successful.”

Last winter, Newton became the first female national champion in school history and posted the sixth best throw in the history of the NCAA Indoor Track and Field Championships. This year, she has not missed a beat. After just one meet, Newton already leads the country in both the shot-put and the weight throw, earning herself the NCAC Field Athlete of the Week title. Newton’s toss of 57’9.5” (17.61m) in the weight throw leads the country by four inches, and her shot-put throw of 48’2.75” (14.70m) is currently the best in all of Division III by three feet.

The Yeowomen throwers were not the only ones to dominate the meet. In the pole vault, sophomore Grace Finney and junior Imani Cook-Gist earned the team 16 points by coming in first place and third place with marks of 10’11.75” and 10’6,” respectively. In the triple jump, senior Annie Goodridge, who was an NCAC Indoor Champion in the triple jump last winter, earned 10 points by winning the long jump with a leap of 17’3.5”.

For the sprinters, senior and two-time All-American Lilah Drafts-Johnson led the way, placing first in the 200-meter dash with a time of 26.05 — just .15 seconds off her school record time.

“As a team, we all know that we need to work harder than ever to win a back-to-back NCAC title, because the other teams are coming for us this year,” Drafts-Johnson said. “Based on what I saw in this last meet, we’ll be ready.”

Cook-Gist also had a stellar sprinting performance, finishing first in the 60-meter dash with a mark of 8.15. The 4×200-meter and 4×400 meter relay teams each placed first, while junior Rebecca Chant finished second in the 800-meter dash.

The men’s team placed seventh in the conference last spring but showed last weekend that they’re stronger this year and ready to move up within the NCAC.

Juniors Jahkeem Wheatley and Daniel Mukasa have pushed each other in the pole vault for three years now. Wheatley won the battle Saturday by clearing a mark of 13’5.75,” earning first place. Mukasa was close behind, placing third with a clearance of 12’11.75”.

Senior captain James Tanford, who leads the Yeomen in both the triple jump and long jump events and contributes as a sprinter, had a career-best performance in the triple jump, leaping 44’0.5” and placing second.

“The first thing I felt was relief, honestly,” Tanford said. “Injuries knocked out my season last year, so finally clearing 44 feet made me feel like a weight had been lifted off my shoulders. As we were driving home, how I [set a personal record] really set in, and I realized that I was actually in range of the [school] record. Setting a goal of almost 46 feet had felt lofty, but after starting my season like that, I really feel like I can get it.”

Junior Julian Jacobs ran the mile in 5:35.67 to earn his team 10 points and himself a second-place finish. Junior John Olsen placed third in the 400-meter dash with a time of 52.49. In the relay events, the 4×400 and 4×200 teams placed third and fourth, respectively.

According to Tanford, this year’s men’s team is the deepest and most talented team he’s been a part of at Oberlin.

“It has been an absolute treat running with all of them,” Tanford said about his teammates. “I’ve never run on a team with so many talented athletes.”

The men’s and women’s teams will resume competition today as they begin the two-day Kent State University Golden Flash Gala. They’ll look to continue dominating their competition, although they’ll have to do so without their distance teammates, who are recovering from the end of the cross-country season and will not join them until January at the earliest.