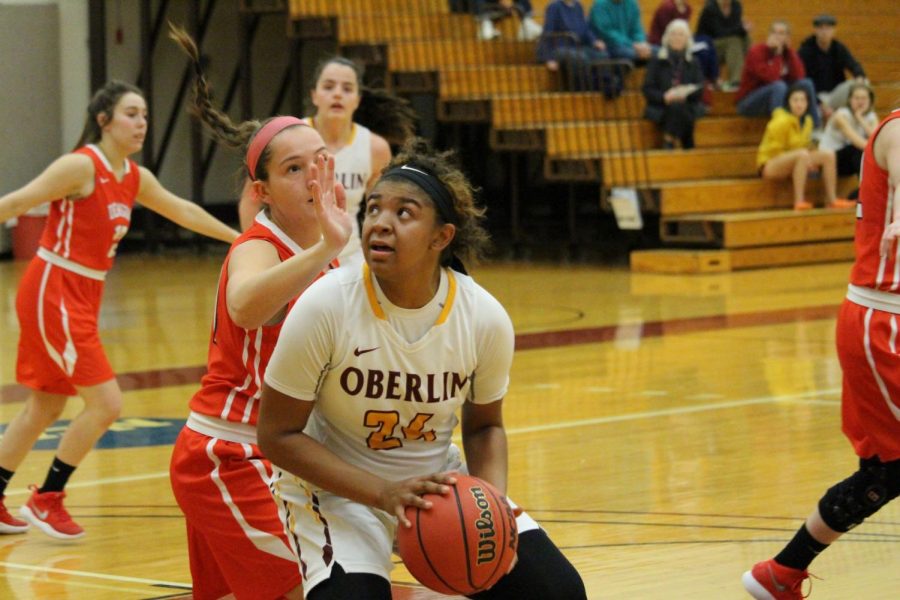 Wednesday night marked the third conference game for the women’s basketball team, who faced off against the Denison University Big Red. Starting out conference play 2–0, we hoped to continue our winning streak and defend our home court. Coming into the game, we knew we had to rebound the ball well and execute and defend the three-point line.

The first quarter started off with uncharacteristically sloppy play. On the offensive end, we were able to keep up with Denison but failed to rebound effectively and run a disciplined set. Defensively, we gave up 16 points, which is quite high for our signature shutdown defense.

The second quarter echoed some of the major struggles we had in the first. Our defense gave up 20 points and faced significant setbacks on the rebounding front. We remained consistent in our offense, scoring 16 points. The bench play — especially from sophomore guard Cheyenne Arthur, who hit an impossible layup early on — helped keep us in the game.

At halftime, the room was frustrated but determined. We were down 36–31, and the team started off by talking about defensive rotation and rebounding. When Head Coach Kerry Jenkins came in, he read us some of the statistics from the first half. Denison shot 57 percent from the three-point line and 41 percent from the field. These were some of their best shooting numbers they had put up all year. We were told to continue to rely on our defensive principles and wait for their shooting to cool off. In the meantime, it was crucial that we get rebounds in order to limit their second chance opportunities.

We came out strong in the third quarter, holding them to eight total points while putting up 14 of our own. From the bench, you could tell that the energy and momentum had changed. The intensity on both ends of the court picked up, as we started to move the ball sideline to sideline on offense and get good, clean looks at the basket. Sophomore forward Maggie Gross appropriately ended the quarter with a tough turnaround shot in the paint as the buzzer sounded. The bench went crazy, fueling our excellent play in the fourth quarter.

The starting five would finish off the game in typical Oberlin fashion. The defense worked as a team, with great communication and rotation. We held Denison to 12 points in the fourth. The most important influence on the game at that point was junior center Olivia Canning. After picking up three quick fouls, she came back and dominated in the post. Denison decided to front her, leaving the back open for Canning to exploit. The backside help came too late or not at all for Denison, which left Canning with wide open layups. This freed up space for other players on the court, as most of the defensive attention for the Big Red was on our 6’4” center. Senior captain and forward Abby Andrews took advantage with a beautiful drive to the basket and knocked down a jumper. Sophomore guard Ally Driscoll commanded the offensive, adding a few points as well. With 54 seconds left, Oberlin up 59–56, our defense forced a shot clock violation. That left us with the ball and 24 seconds. Denison sent Andrews to the line, where she connected on one of two free throws. The Big Red would miss the three-pointer in the next possession and put junior guard Alex Stipano to the line. She would hit both free throws to seal the game.

After the game, there was a strong sense of pride for pulling out a tough conference win.

“I’m really proud of the team for holding it together the whole game,” Andrews said. “There was never more than a six-point lead for either team the whole game, and I think in the past that would’ve made us fall apart. That’s something really awesome about our team this year — everyone wants it so no one will give up.”

Despite sloppy play in the beginning of the game, we were able to rely on our bench to give us quality minutes and consistent, strong play from our starters.

“We did what we needed to do to get the win,” Stipano said. “It wasn’t pretty, but we are happy with the outcome and are excited for what the rest of the season has to offer.”

Next we’re playing our fourth conference game against the Ohio Wesleyan University Battling Bishops tomorrow in Philips gym at 1 p.m.