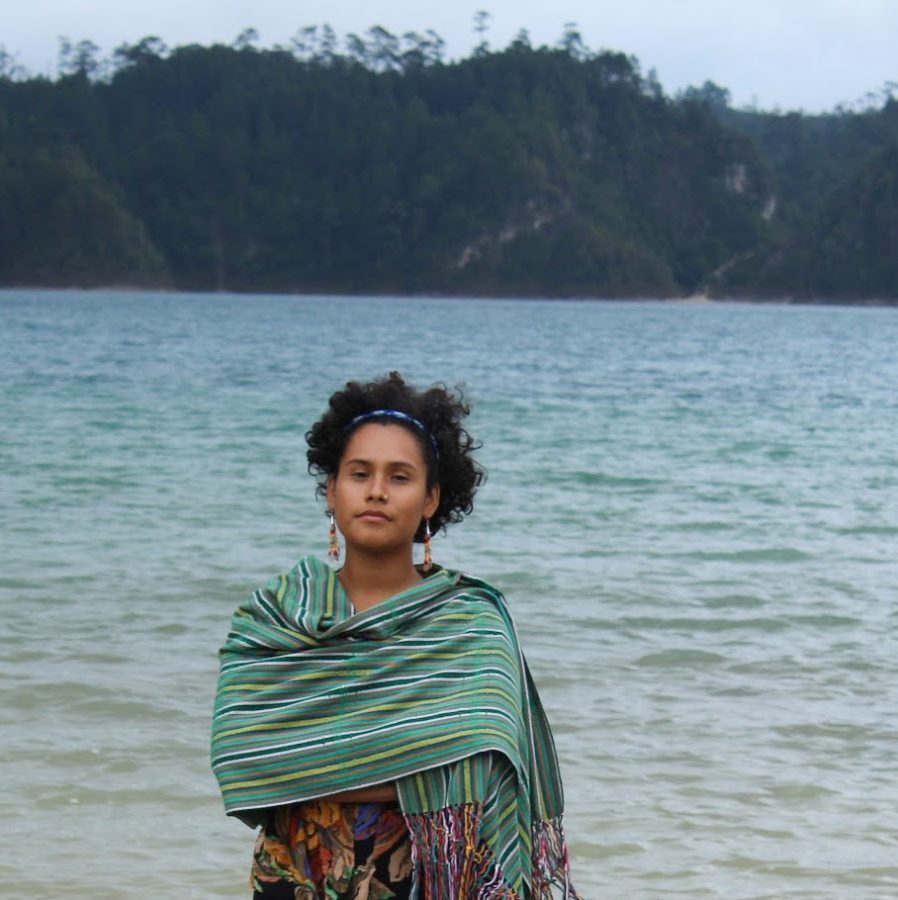 Laura Pérez Olivera, a yerbera/botanist and activist with a focus on food justice and environmental racism, came to campus on Saturday to give a talk called “Plantita Platica: Weaving the contemporary (un)documented Oaxaqueña experience with traditional knowledge” as part of the Indigenous Women’s Series, which has been active on campus since 2004. Olivera, originally from the coast of Oaxaca, Mexico, and a graduate of UC Berkeley, studied plant biology and ethnobotany with a focus on agrobiodiversity in the home gardens of Oaxacan indigenous mujeres in the San Joaquin Valley. Olivera has also worked with the Native Seeds/SEARCH conservation farm and the Oaxaqueño Youth Encuentro.

We’re talking about two different countries, so that’s a big influence on how it differs. I think that people down south definitely have more access to food — fresh food — especially because, like I said, there’s mercados. So the mercados are the markets, and at these markets, people are selling their own produce — things that they grow in their own home, things that they grow on their own land. People trade still. People are still just growing things from their own homes. So I think when it came to UC Berkeley, or the Oakland, [CA], area, there’s a difference in that it is a very urban setting. I did some work with a nonprofit called Acta Non Verba: Youth Urban Farm Project, and they are really deep east in Oakland. They’re a quarter-acre farm — a quarter-acre’s not that big — and literally just a block away from the farm is a liquor store. And that’s the local [farm] that you can really find. The big difference I think is that in America, it is more obvious … that food is accessible or not accessible. In Oaxaca, people do what they can with what they have.

What elements of traditional knowledge have been especially important to your work?

Practicing traditional knowledge has been extremely important. I think the practice of anything is always the hardest thing for anyone, so I think just becoming comfortable with my own self and [knowing that] that I’m capable of planting a seed and that it’s going to grow is the simplest form [in which] I’ve been able to practice traditional knowledge. And that’s been really important for me.

How was this knowledge spread or passed down in your community when you were growing up?

My mom has always cooked. She spent a lot of time with her grandma … so my mom has continued to pass down a lot of the traditional foods that she learned. Back home, my uncles are teaching my cousins how to farm; how to take care of the land, how to take care of the cattle. And I think a lot of it has been passed down through stories and through just making someone do things. You’ve got to do it.

Is the way that knowledge is passed down gendered at all? Are there specific things you learned, as a woman?

Yes, I think that it is definitely gendered. The reason why it’s gendered is because of colonialism — that’s one of the main reasons why things became gendered. It’s also gendered because the women are always in the kitchen and the men are, a lot of times, outside. I am seeing a shift in the way that knowledge is passed down not gender-specifically, and I hope that things get to a point where people understand that there isn’t just “this” or “that” in terms of gender.

How has your experience as an immigrant impacted your activism?

In terms of being at the forefront of activism, I think it’s definitely made me feel a little afraid — or a lot afraid — especially when I came down to protests happening in Oakland, I always felt very uncomfortable about putting myself at risk because I did not want to disappoint my mother. But I think I have learned to be active in a different way that doesn’t mean being at the front of things in that way. One way is through sharing my own knowledge, and also connecting with other Oaxacan migrant youth and planning events like the Oaxaqueño Youth Encuentro that was mentioned, which is the Oaxacan youth convening that has been happening every year for the past four years. And that’s been one way that I’ve been active within my own migrant community.

It seems like a lot of your work ties together really big issues with very local aspects, like your community and your family. Can you talk more about that connection?

In the past couple of years, there’s been more widespread attention to environmental racism in America, due to the struggles against pipelines — especially DAPL. How do you think that greater awareness or focus can best be channeled to effect change?

I’m a really strong believer that the best way to do things is locally, or from home. And I think that … it’s more obvious, or it’s being talked about more. Environmental racism, and things like that — those are just words that have been used to describe an experience that has always been there. So a lot of that is showing the people who have never thought about this or experienced this what it’s like, or what it is. But I think for most of us who have experienced environmental racism, or who have experienced food injustice, or being undocumented, or whatever oppression that we’ve experienced, we’ve always known these words. And we’ve never needed to have a bigger lens on us, because we’ve always been doing things from home, and surviving and thriving in the ways that we can.

What motivates you to do this work?

For me personally, it’s part of my well-being to reconnect with my own community and my own cultures and traditional knowledge. It’s made me a stronger person and has been a way for me to process a lot of the trauma that I’ve experienced. And also, trying to see a vision for the future that doesn’t forget about the past.

What do you do to stay connected to your culture and your ancestors?

I think my whole existence — the fact that I’m alive — is a big part of that. But other than that, connecting with plants is a way that I’ve stayed close. I always keep an altar at home. That’s just something that I do because that’s part of my culture.

Are there any current structures around either food justice or environmental racism that you’d like our readers to know about?

There’s so many things. It’s hard to say one thing. But … be conscious about the way that you navigate the world with your privileges. I think one of the hardest things is that people don’t necessarily recognize — or I guess, white people don’t necessarily recognize — when they’re being appropriative or when they are not understanding their privilege and taking up too much space. I think that can apply to a lot of things, like gentrification. I lived in the Bay Area, I live in Tucson — those things are obvious in both places, and I’m sure they’re very obvious in every other city in America. I go back home and I see people that are privatizing beaches, that are building big hotels along the beach. I see people that are not from there who are living there and taking up land there. It’s not like it’s been the end of taking away land from natives, or people of color, because that’s still continuing.

In your talk, you mentioned your frustration when you were in academia with the sterile approach to science. You’ve also expressed concerns about appropriation. How do you think academic institutions, in your ideal world, would approach ecology? Would you want them to include every aspect of traditional knowledge?

It would definitely have to include traditional knowledge, but it would [also] have to include providing resources and training to people from the communities, wherever these scientists are working, to be able to carry out projects. So, I think this isn’t about who is in higher education, or who has access to higher education, but [about] making space for people [who] have always been here, and are from here, and that continue to remediate a lot of the bad science that has been going on. Another thing — I think when talking about sterile environments and stuff like that, I think that those places come from money. It’s about how much money a lab is getting. It’s about who gets access to that information. It’s not about creating a sustainable place for future generations.