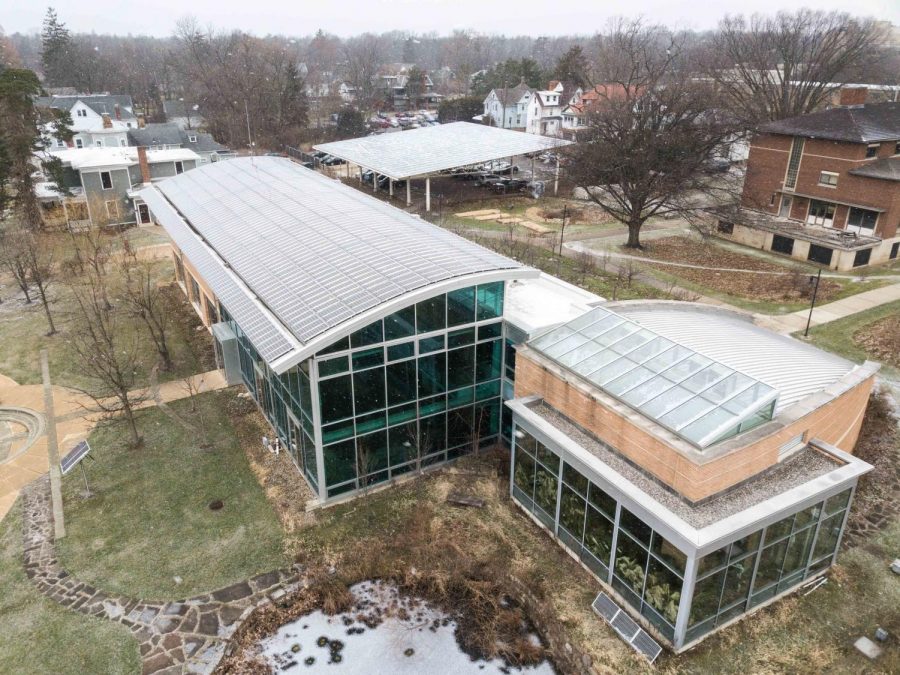 The Adam Joseph Lewis Center for Environmental Studies is one of the most innovative green buildings in the country. Despite this, the College falls short of its sustainability goals by a large margin.

The Office of Environmental Sustainability is attempting to reduce Oberlin College’s carbon footprint and boost its sustainability reputation by cutting emissions through a new landfill gas recovery system that was proposed during a presentation to the Board of Trustees yesterday.

“[The video] highlights carbon neutrality progress over the past decade and introduces the proposed heating solution utilizing waste heat from the electrification process at the landfill,” said Bridget Flynn, the sustainability manager of the OES.

Among its peer institutions, Oberlin is known for its progressive sustainability initiatives and innovative ways of reducing its carbon footprint, such as the Living Machine, glowing orbs in each dorm that alert students of how much energy and water they use, and the composting bins in each cafeteria.

“We are guided by the Environmental Policy Implementation Plan, various environmental commitments, and our newest strategic plan: ‘Institutional transformation through an inclusive approach to academic and musical excellence,’ Former College President Marvin Krislov said in a press release in response to the accolade. “I am proud of the advancements this report demonstrates and the accompanying ‘Gold’ score.”

A new landfill-centered sustainability approach was first proposed in fall 2016 after the environmental consulting firm EverGreen Energy was contracted to assess Oberlin’s environmental footprint, potential for renewable and efficient technology integration, and opportunities for consolidating energy resources within the College and community.

“About two miles from campus is a landfill generating a lot of methane and heat,” College senior and OES Media Team Intern Moira Peterson said. “Currently [the] company Energy Development Limited captures some of this methane to generate renewable electricity. The proposed solution would harvest waste heat from the electrification process. We could utilize these free local resources to generate hot water that would then be piped to campus for our heating needs.”

This new system would collect energy generated from the nearby landfill and would heat dorms and facilities on campus, replacing the current gas-powered steam system and reducing the campus carbon usage by 65 percent compared to the 2015 usage profile, according to data released by EverGreen Energy. The gas recovery system could also reduce annual campus water consumption by approximately seven million gallons and reduce annual sewer discharge by three million gallons. The measure could bring Oberlin 92 percent of the way toward reaching its goal of becoming carbon neutral by 2025.

“Although natural gas emits about half as much carbon as coal, at its source, it’s still a fossil fuel,” Flynn said in the video presented to the Board of Trustees. “During the heating season, burning natural gas emits about 89 metric tons of CO2 a day. Last year we burned 189 million cubic feet of natural gas. That equates to roughly 11 million metric tons of CO2 emissions, which represents about 65 percent of our current College carbon emissions.”

Oberlin is currently using 100 percent renewable electricity, according to Flynn, so the heating process remains the largest source of emission and waste on campus. The renewable energy initiative was launched in 2012 when the College installed the 2.27 MW solar array on North Fields, the largest solar array of any liberal arts college in the U.S.

Though the cost of creating the landfill gas recovery system is still unknown, the Environmental Protection Agency says most models end up saving companies and institutions money in the long run, as they provide a renewable source of energy as opposed to expensive coal or fossil fuels.

This is one of the many ways in which the College is hoping to reach its goal of becoming carbon neutral by 2025. Since 2007, the College has reduced its emissions by over 50 percent.

College senior and OES media team intern Bryan Rubin said he believes the video and presentation went over well with the board.

“Our video was well received,” said Rubin. “My hope is that it will provide trustees with the knowledge required to make the right decision to move Oberlin into the 21st century. This video will not directly lead to a vote on the proposal, but allows members of Oberlin’s board of trustees to understand that we are serious about positive change, and that it is not out of reach.”