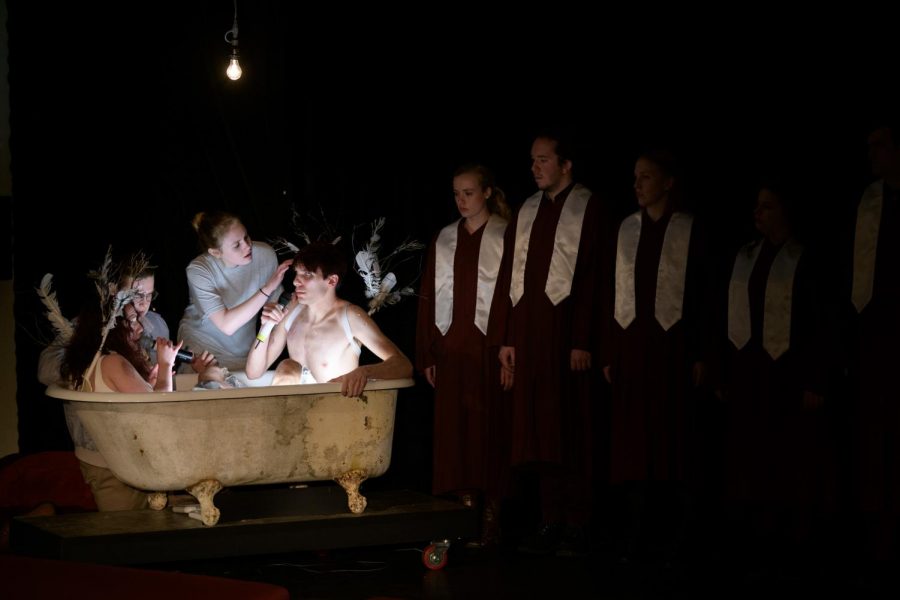 Editor’s note: This article contains discussion of human trafficking, violence, sexual assault, and suicide, as well as spoilers for the opera Angel’s Bone.

Pulitzer-winning opera Angel’s Bone, which ended its Oberlin run on Wednesday after five sold-out performances, offers no easy answer for complex social issues. The opera follows a struggling suburban couple, Mr. and Mrs. X.E. (Conservatory sophomore Shawn Roth and double-degree sophomore Alexis Reed, respectively), who discover two angels in their backyard (College junior Chloe Falkenheim and double-degree fifth-year Nicholas Music), and choose to exploit the angels for their own gains. Librettist Royce Vavreck and composer Du Yun, OC ’01, weave a chilling contemporary narrative that strikes a particular chord here in Ohio, where nearly 200 cases of human trafficking were reported in 2017 alone. The opera focuses on the humanity and the banality of Mr. and Mrs. X.E. as they commit horrible acts against the angels.

Du Yun was intentional about choosing to compose a piece about a social topic to harness the power of art, making the topic more resonant to the audience than it would be if it were only presented with facts and figures.

“Art is experiential,” she said after Tuesday night’s performance, where she saw the Oberlin production for the first time. “The fact that we just spent 85 minutes together in the same room where we see these breathing creatures come about has so much more power — if the work is OK — than reading about a paper. And this is what art’s power is in society. … I remember when I was a student at Oberlin. You stretch so much to do better, to be a better person. But sometimes you lock yourself in a practice room and you’re thinking ‘what the heck? What am I doing? I want to solve the world.’ And you feel like the world is not listening to you. But I think that gradually, you understand the power of art.”

In early scenes, the angels have a child-like optimism. Then, in a moment that sets much of the tone for the rest of the performance, Mrs. X.E. demands that her husband “prune” the angels. Her facility for getting others to do her dirty work plays out many times throughout the story. This scene is particularly striking in its use of the opera chorus. As Mr. X.E. cuts off the angels’ wings, the chorus stands at the front of the stage. The first time his knife goes down, they break sticks, to the effect of breaking bones. The second time the knife goes down, they throw feathers out into the audience. After the third time, the chorus members have smeared their faces with blood.

“I think the work that the chorus does is so sensitive and so specific, and it’s so moving,” said Assistant Professor of Opera Theater Christopher Mirto, who directed and produced the show. “I think a lot of my favorite moments happen between the lines, in a way. I think some of the moments that happen while other people are singing are my favorite moments, because I think it adds humanity and texture to the play’s world and to the characters.”

Mrs. X.E. reinvents herself into a twisted sort of evangelist, offering “angels at your service” to anyone willing to pay. Some of the people who pay for time with the angels want to look at them, or draw them, or be held. Some are physically violent. Some commit sexual assault — as does Mrs. X.E. Mr. X.E. remains complicit in the angels’ exploitation even as he expresses misgivings. In quiet moments, he gives the angels back some of their feathers — never enough to allow them to escape, only enough for a moment of hope.

“There are certain moments of kindness, even if it’s twisted and dark, and an understanding that the reality of violence is a lot more complex,” Falkenheim said. “It’s twisted in with kindness.”

In composing Angel’s Bone, Du Yun chose to showcase voice types not traditionally found in opera theater to add dimension to the plot. At the bleakest point in the opera, Falkenheim’s character “Girl Angel” sings a punk aria.

“There’s punk as this moment of rebellion,” said College first-year Megan Grabill, a member of the production’s dramaturgy team. “[Girl Angel] is trying to break free from human trafficking and reclaim her identity, and a lot of punk is that struggle for identity.”

Eventually, Mr. X.E. has a change of heart and brings a bag full of feathers to the angels so that they can rebuild their wings and escape. But the angels do not understand what he wants from them.

“In the past, when [Girl Angel] has gotten feathers from Mr. X.E., usually something bad is about to happen,” Falkenheim said. “She is resisting doing anything bad, anything that was like some of the things that have happened to her before.”

Mr. X.E. desperately tries to show the angels how to put their feathers back by stabbing them into his own arms. Then, he stabs himself through the heart with the angel feathers, killing himself.

“Mr. X.E.’s suicide, I think, is massively heartbreaking because of how resolute he is in his decision to kill himself when he sees what he has done to these poor creatures,” Conservatory first-year and assistant director Charlotte Maskelony said. “I hope that people take away that there is no discernible, clear line between good and evil in this production. … I think we can agree that Mr. X.E. is not a completely evil man, but he does these horrible things to people.”

After the angels flee, Mrs. X.E. attempts to manipulate the situation again, spinning a false narrative of how her husband forced her to participate in exploiting the angels. The media falls for it completely. The opera ends with Mrs. X.E. as a famous, wealthy woman, pregnant with the child of the angel she assaulted, free of the husband she never loved.

“I think that at the end of the play, Royce [Vavrek] and Du Yun pitch this thing where Mrs. X.E., for all intents and purposes, wins,” Mirto said. “So that’s where the opera lands, and you could ask the question ‘but at what cost?’ But then the lights go out, and I think there’s something really, really difficult about that.”

For Reed, this ending is needed to carry the message of the opera.

“I believe it has to end the way it does because it’s so important for people to realize that there are no happy endings in situations like this, and the bad people do win,” Reed said. “That’s why this opera is so centered on the traffickers rather than the people who are being trafficked. It’s about finding the moments where you can connect to their humanity and realize that this is a problem in everyday life. It’s not just these horrendous villains who do these awful things. It’s anybody.”

Bringing a surreal operatic interpretation to a very real crime like human trafficking raises many questions about the roles of art in awareness and activism. College senior Sarah Blum, co-chair of Oberlin Unbound, Oberlin’s anti-human trafficking student organization, spoke to how Angel’s Bone navigated its way through these critical conversations.

“Any presentation of human trafficking that is simple isn’t good enough,” Blum said. “Human trafficking is so multifaceted, and frequently in representations of it, they fall back to stereotypes of violence, and a male trafficker and a female victim — things that when you look at the statistics aren’t always what plays out. And because we’re presented this one image, we’re not prepared to see what’s real, because it doesn’t match. And I think Angel’s Bone does a good job. They do have a male victim, and they have a good selection of perpetrators. I think they do a good job in that way. I just think, whenever I see a presentation of human trafficking, there’s always the fear that people will take it and say ‘that’s the only way it can be.’ And there’s so many different ways it can be.”