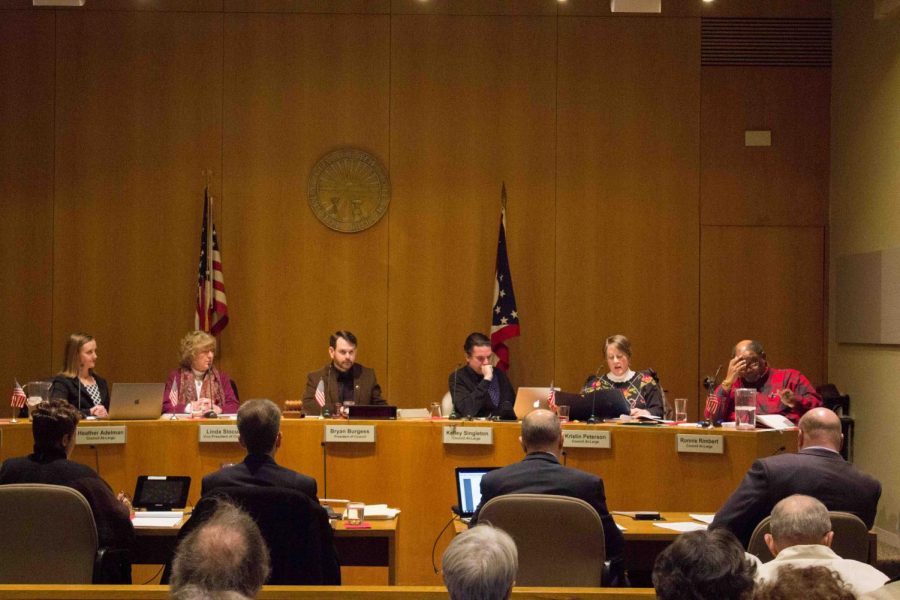 Monday’s City Council meeting, where councilmembers and community members discussed the possibility of settling with NEXUS for $100,000.

Oberlin City Council did not proceed with an emergency vote on a proposed $100,000 settlement with NEXUS at the council’s regular meeting Monday night. After hearing the public’s opposition to the settlement, the council voted to not accept the offer from NEXUS and wait until further public discussion was possible.

The terms of the settlement dictate that the city not engage in any further litigation intended to interfere with construction of the pipeline and grant full easement rights in exchange for a $100,000 payment from NEXUS. A grant of easement would give NEXUS the legal rights to build the pipeline on city-owned land. The city of Oberlin has been engaged in litigation opposing construction of the pipeline since December 2015 and has spent tens of thousands of dollars in lawsuits.

Councilmembers Heather Adelman and Linda Slocum were the two dissenting votes against proceeding with the emergency decision. Adelman, Slocum, and many community members who spoke in opposition to the settlement cited the city of Oberlin’s Community Bill of Rights and Obligation Ordinance as a reason to oppose the settlement. The ordinance was passed in 2013 to affirm the authority of the residents of Oberlin to govern their own community in relation to the oil and gas industry, and it specifically prohibits the siting of gas-delivery infrastructures within the city.

“Negotiating a settlement to me means we will violate our own law, … and it means our integrity can be bought for $100,000,” Adelman said during the meeting.

Slocum invoked the community’s right to self-governance in a statement before the vote.

“At the heart of this matter is the power of national and international corporations to assert their interests over the will of people who want to pursue their right to life, liberty, the pursuit of happiness, and safety,” she said.

The other four councilmembers expressed frustration with the settlement but said that they thought it was the best option for the city in the face of what they believe to be the inevitable construction of the pipeline.

Members of the public were invited to speak on the issue before the vote. John Elder, vice president of Communities for Safe and Sustainable Energy, said that now is the time for the city to hold firm and follow its own laws.

“It may be argued that if the city does not accept NEXUS’ offer of $100,000 now, it will never get as favorable a settlement in the future — perhaps none — but we did not pass our Ordinance in order to win a better price for a pipeline lease,” Elder said to the council. “We passed it to protect our rights.”

Oberlin College students were present at the meeting, including members of the organization Students for Energy Justice. SEJ member and College sophomore Rachael Hood said that while Oberlin boasts that it has consistently been on the right side of history, agreeing to the settlement would be contradicts to that legacy.

Other community members referred to previous pipeline accidents, NEXUS’ parent company Enbridge’s role in violence committed against indigenous communities, and the city’s obligations to protect its citizens as reasons to vote against the settlement with NEXUS.

After hearing the public’s comments, Council President Bryan Burgess moved to withhold emergency voting on the settlement until further discussion and public input. Elder said that he was pleased and surprised at the council’s decision to not pass the vote Monday.

“I’m surprised because this means that if NEXUS had said, ‘You have to do this tonight or its off the table,’ they’re disregarding that,” Elder said.

Hood was hopeful that the decision to not vote on emergency gives organizations like SEJ the opportunity to get the word out about future meetings and increase the public’s engagement.

“I think it gives us a little bit of time,” Hood said. “Hopefully if they’re having more meetings, more people will come out and say how they want the council to vote. This semester SEJ will be doing a big awareness campaign on campus, and we’ll be in contact with groups like CSSE to figure out when these next meetings are and get people to come out to them.”

If built as proposed, the NEXUS pipeline would pass through a 50-foot section of land in the southernmost part of Oberlin. In its entirety, it would transport natural gas through eastern Ohio, southwestern Michigan, and into Canada, stretching a distance of 255 miles.

Oberlin and the city of Green, Ohio are the only municipalities continuing to fight construction of the pipeline in court. NEXUS has offered the city of Green $7.5 million and additional terms in a proposed settlement to end that city’s continuing legal battle against the company, in exchange for use of about 2.5 acres of city property in construction of the pipeline. NEXUS’ proposed settlement with Green will be discussed at the city’s council meeting on Wednesday.

“You cannot predict what will happen,” Elder said. “Even though we’ve passed the permitting stage and this pipeline has a permit … if we succumb now, we’ve lost our chance.”

Hood added that with its opposition to the NEXUS pipeline, Oberlin has the opportunity to be part of a greater collective movement against the fossil fuel industry.

“I think that when small communities decide that something’s going to happen and they have no power to change it, that’s when the status quo is maintained,” Hood said. “There are a lot of stories of defeat, and I recognize that. Statistically, almost everybody is going to lose to a pipeline. But there are sometimes people who don’t.”