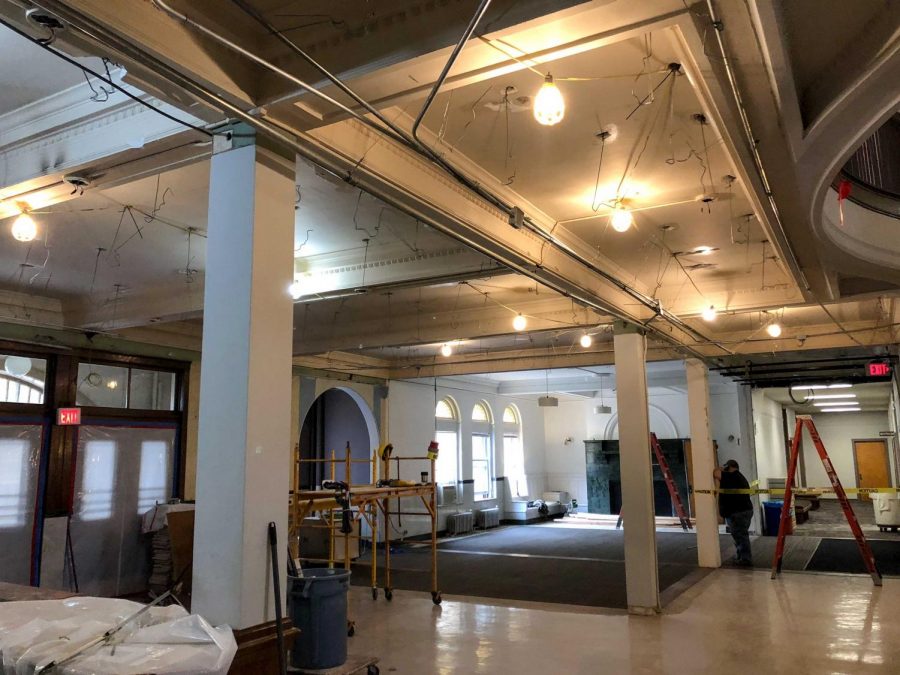 Wilder Hall lobby was renovated over Winter Term. The space had numerous walls knocked down in an effort to give students more community spaces to engage with.

Students returning to campus this week have been greeted with a revamped Wilder Hall lobby, which will undergo further changes as renovations continue. The lobby was enlarged and, according to a letter sent out by President Carmen Ambar and Student Senator and College junior Kameron Dunbar, “This area will be fitted with a new TV, speakers, and other entertainment options that will allow open music and entertainment streaming.” Additionally, a competition will be held to select some new iconic furniture, à la womb chairs. Changes ensued after Student Senate and the administration reviewed student feedback on campus life.

Last semester, Senate surveyed Oberlin students about their experience on campus, including academics and social life. Close to 1,100 students responded and the results indicated to a lack of campus community. Believing the feedback emerged from a dearth of accessible community spaces, Senate brought the issue to the Student Union and senior administrators, who collaboratively discussed the issue and routinely circled back to Wilder.

At the same time, Senate, seeking to increase student-trustee contact, devised a plan to bring visiting trustees on a guided tour of Oberlin dorms and living spaces.

“The goal was to show trustees — who may not have been in a dorm for 20 years — what living conditions are really like,” said Dunbar, who initially proposed the idea. “I’m thrilled [with] how [the tours] went.”

As a result of the tour and recent discussions around community spaces, Wilder was selected for a quick facelift over the winter break.

Dunbar saw Wilder as a test run for future collaborations with the school’s administration including, potentially, organized transportation to and from Cleveland to reduce campus isolation.

According to Dean of Students Meredith Raimondo, the financing for the project came out of the existing budget for student life. Like Student Senate, Raimondo saw the process of choosing Wilder as a loose, informal proposal that had been in the works for some time, but received new life as a result of Senate’s trustee tours.

“After the tours, trustees talked about the conversations they had with students and what they saw,” Raimondo said. “That caused me to think, ‘What were some things that we can do to make a difference now?’ If the tours hadn’t happened, I don’t know if we’d be doing the remodel.”

Raimondo highlighted the support she received from the trustees to proceed with the project, but she also emphasized that trustees had little relationship to the actual plan.

Raimondo discussed the role that student groups, such as the Student Union Board, had in advocating for the Wilder lobby’s remodeling. However, the final decision for the renovation was under the jurisdiction of the senior administration and the Office of the President.

Although Senate has been unable to convince the trustees to allow for student representation on their board, Dunbar insisted that “the board is listening to students,” adding that the Wilder changes and the tours were perfect examples.

“I want people to trust the process,” Dunbar added. “Senate is on path to showing that it can actively represent students. The board looks five years out, senior administration looks to every day. Those are the people who are most prepared for our concerns. Senate is trying to push itself into the picture and bring students with them.”