In The Locker Room with Lilah Drafts-Johnson, All-American Hurdler 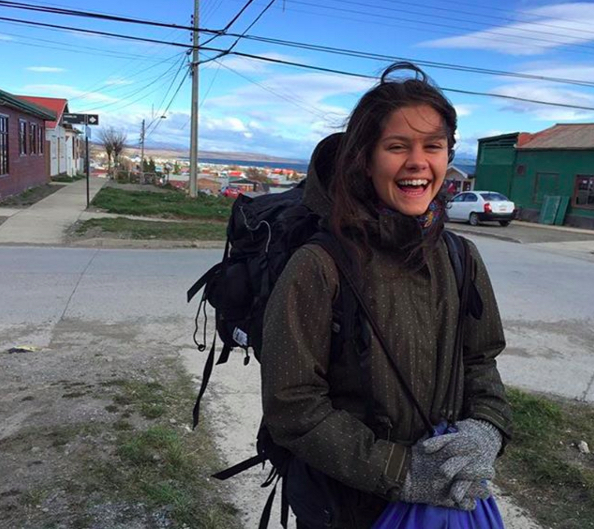 College senior Lilah Drafts-Johnson, well-known across campus for her accomplishments on the track, hopes to return to Chile after she graduates to conduct research with the Ministry of Sport.

College senior Lilah Drafts-Johnson is a two-time All-American and was the NCAC Indoor and Outdoor Sprints/Hurdle Athlete of the Year as a junior. Drafts-Johnson does more than just dominate on the track; she plays music, teaches Spanish, and looks for ways to bring the female athlete community together, as well as decreasing the athlete/non-athlete divide.

Last Sunday you helped put together an event called “Stronger Together,” the first of its kind. What was this event, and how did it come into being?

Last semester I was the teaching assistant for the Sports, Culture, and Society cluster, and part of my role in that was being a mentor for the first-year students who were in the cluster. One of my mentees was [College first-year] Leah Ross, and a question Leah asked me was, “What is the Oberlin female athlete community like?” I didn’t really know how to answer. I know very well what my team’s community and culture is like, but there are so many teams and so many athletes. It made me realize that I don’t really know what our overall community is like. Leah also had this idea for a survey for members of the women’s teams, asking what they thought were common experiences or shared struggles. She wanted to find out what the needs were for the female athlete community, and we wanted to get the community together in the same space and get to know people across teams better so we can be more supportive at team events.

In 13 Ways of Looking at Sports, students focused on the ways that sports are viewed across campus. Why do you think it’s important we work to decrease the divide that exists between athletes and non-athletes?

The reason I’m so invested [in decreasing the divide] is because I feel like I’ve straddled the divide very well. I’ve seen a lot of teammates or people on other teams go through all four years at Oberlin and never really step outside certain spaces on our campus. Having lived on South campus for all four years, and participating in the [Oberlin Student Cooperative Association] at one point, and just generally step outside of the athletics bubble, I really feel like there’s a lot of benefits to going and doing those things — then also being on the other side of the divide, participating in athletics and seeing what I can take away from my team community and my coaches. I don’t want others to miss out on that. I think there’s no point in living in this binary, and so by closing the divide, I’m hoping that people will get to have experiences on both ends of the spectrum, whether that’s more traditional “Obie” or getting to use Philips gym and understanding the resources that are available there.

Outside of track, what are some things you do?

The thing that takes up the most of my time at Oberlin is the Spanish in the elementary school program, called SITES, which is basically this emerging teaching program where we send college students into the elementary schools twice a week and teach 30-minute sessions to kindergarten through second graders. That’s run by [Instructor of Spanish & Language Teacher Training] Kim Faber in the Hispanic Studies department. I’m a grade-level coordinator for that, so I manage first- and second-grade level teachers. I’ve done that since my sophomore year. In the past I’ve also worked for [Preventing and Responding to Sexual Misconduct], which I did for four semesters.

It’s kind of hard because I feel like my musicianship is something that has really fallen to the wayside at Oberlin, but I sing and write music and play the piano. I think I deliberately chose not to take a musician’s path, which is sort of why I chose Oberlin. I wanted to have access to doing those things without it becoming my whole life. I think I’ll go back to doing it for my own enjoyment [once I graduate].

You’re an All-American hurdler and a major component of a team that won two conference titles last year. What are your goals for this season?

This year as a whole, the track team has really focused on getting back-to-back conference championships, so winning the indoor and outdoor championships, like we did last year. We’ve also been in the national rankings for the entire indoor season, so we’re also really pushing to have our highest placing that we’ve had yet at the national meet.

Personally I really want to get an All-American award for the 400 [meters] for indoors, which I’ve never done before. And I’m just trying to win the 400 meter-hurdles outdoors.

Do you have any advice for other female athletes at Oberlin who may look up to you?

Balancing my two worlds has been really difficult throughout my time at Oberlin. There have been a lot of sacrifices made to maintain both my athletic endeavors and also academic. I would say the advice I would give not just to athletes but in general, is setting really strong boundaries and understanding what your priorities are in all realms of your life. Don’t expect your lives to be separated. When I’m having a bad day on the track, it flows over to when I’m trying to get my homework done for the night.

I also think we have such strong women’s programs at Oberlin and that not being afraid to celebrate that is important. I think often it’s uncomfortable to talk about your achievements, especially for women, and I think we should be celebrating them.

Do you have any role models or mentors who have shaped you throughout your four years here?

I think the senior class when I was a first-year, definitely. A lot of my closest friends in my first year of college were seniors on the track team. Now, as a senior captain, I’m really trying to embody what they left for me. Other role models I have are my coaches: my coach my freshman year, Jason Hudson, and now Alisha Samuel.

What do you plan on doing once you graduate?

I’m working on an honors thesis about different moments in Chilean history and what was going on in sporting competitions and how they reflected what was going on in the country. I’m looking at different sociological and political ideologies that were happening at the time. Part of my thesis is meant to be a basis for a research project I’m hoping to do in Chile after graduation. I recently heard back from the Fulbright Committee, and I’m a semifinalist for a research grant. Now I just need to wait another two months to figure out if that settles. I would be working with the Ministry of Sport there and looking to see how their sport policies affect athletes’ abilities to be professional athletes and how people are getting into sports in general.

Will you continue to run?

I think if I get the Fulbright I definitely will, because it’s born out of my experience with training with the team while I was abroad in Chile. Having that legitimacy of being able to actually to compete with the people I’d be interviewing and interacting with would be really useful. I haven’t really figured it out. If I have a really good season and feel like I can run even faster, then I’ll keep doing it.