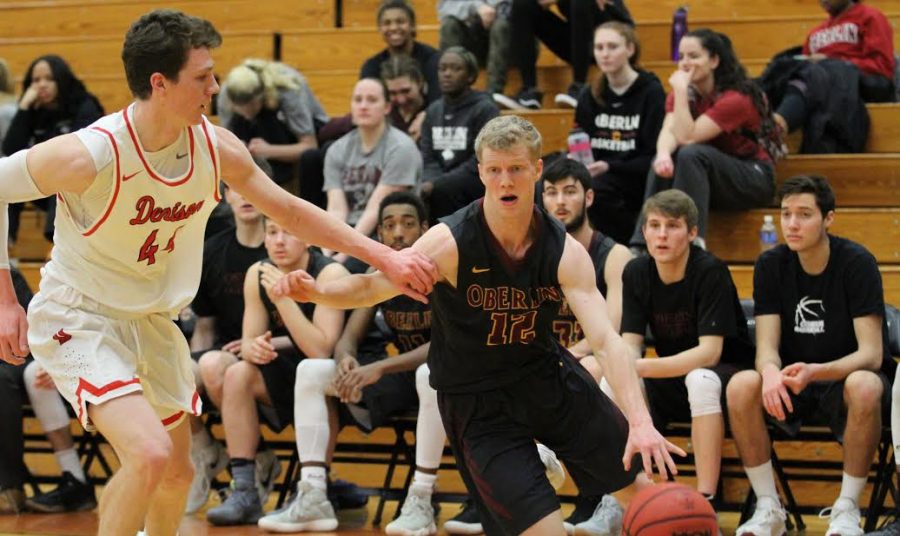 College sophomore guard Josh Friedkin drives the ball to the hoop in a 59–52 win against Denison University Jan. 24.

As the men’s basketball season comes to a close, players and coaches in the program have enjoyed reflecting on a season in which they defied the odds. Last winter the Yeomen won just three games and graduated five seniors — including one of the best hoopers in Oberlin basketball history in Jack Poyle. With just one game left tomorrow, the Yeomen have collected eight more wins than the 2016-17 season — without any senior leadership.

Sophomore forward Andre Campbell, who started in 23 of 25 contests last year, tempered his expectations going into the year but has been elated with the team’s results.

“Coming from a 3–22 record, I was worried about having the same thing happen,” Campbell said. “But having a 3–22 season, you can only really go up. The growth has been great. We are young, so we have a lot of growing to do, but we are making strides in the right direction. We just need guys to continue to buy into the program.”

The Yeomen came back from their Feb. 10 loss to Wabash College by completing a season sweep of Allegheny College Wednesday. Junior Eli Silverman-Lloyd and sophomore Josh Friedkin led the way in the 65–53 win with 21 and 20 points, respectively. Sophomore Christian Fioretti controlled the boards with a game-high 13 rebounds.

Head Coach Isaiah Cavaco said he has focused on development from day one, considering his team consists of six first-years, seven sophomores, and just two juniors.

“With our youth, I can’t assume anything when we’re in practice or in games,” Cavaco said. “It seems repetitive at times for our few older guys, but we make a real effort to explain everything, demonstrate everything, and reinforce the things we want to identify as staples in how we play.  It’s also taken some trial and error to figure out what things work for all of our individual strengths, especially when we continue to evolve throughout the year.”

Cavaco’s underclassmen displayed a brilliant effort in Gambier, Ohio, Feb. 7 in a 78–63 victory against archrival Kenyon College. Fioretti led the way with 14 points, Campbell contributed 13, and Friedkin and first-year Ben Rosow added nine apiece. It was a back-and-forth competition in the beginning, but the Yeomen managed to pull away just before the end of the first half with a 12-point lead. Oberlin continued its dominance in the second half, up by as many as 28 points at one point.

Junior guard Nile Godfrey is in the top five on the team for several categories, including assists (29), steals (14), blocks (6), and minutes (442). He said that as one of the oldest and more experienced players in the program, he has enjoyed watching his teammates grow.

“I feel like we’ve grown a lot this season,” Godfrey said. “Having a team with no seniors is cool because we’ll have everyone back next year, but it also meant that we had to grow up quickly, and I think we’ve done a good job with that. We have a lot more growing to do as well, and I’m excited to see how good we can become.”

In the points category, Friedkin has led the way with 324 overall points, 14.1 points per game. Silverman-Lloyd is next with 291 points, a 14.6 scoring average per game — highest on the team. Campell and Fioretti have contributed 284 and 204 points, respectively. Fioretti proved he is a well-rounded player, collecting 145 rebounds, 103 assists, and 31 steals, all team bests. First-year Jordan Armstrong has put together a solid rookie season with 123 points and 36 blocks.

The Yeomen will look to quadruple last year’s wins column tomorrow against the DePauw University Tigers, who are 11–13 overall and 7–10 in NCAC play. The tipoff is at 1 p.m. in Greencastle, Indiana.