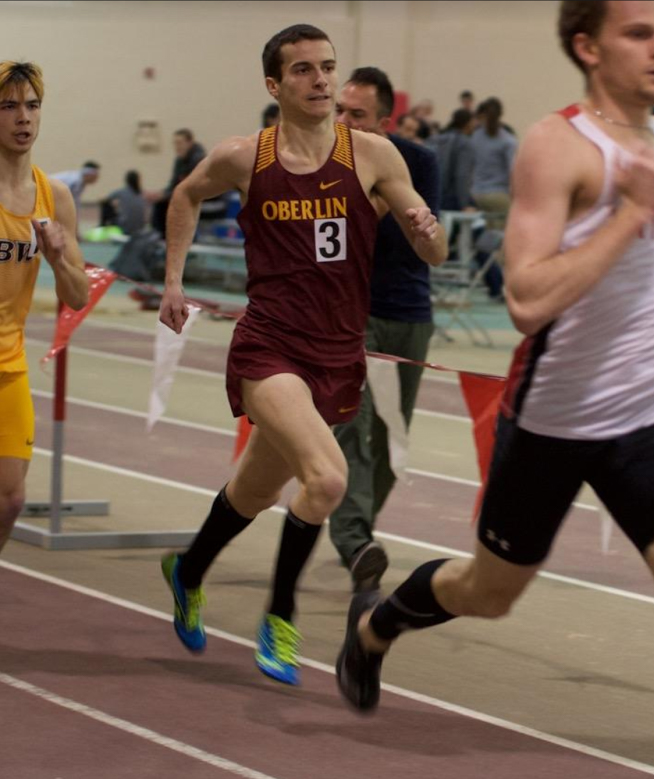 On Saturday, the men’s and women’s track and field teams loaded up the turtle tops and drove down to Otterbein University to take on the best Division III competition in the state at the All-Ohio Indoor Championships. Simply qualifying for the meet was a challenge in itself, as entries were limited to the top sixteen athletes in each event. At the end of the day, the Yeowomen placed fifth in Ohio with 66 points, while the Yeomen took seventeenth with seven points. Otterbein and Mount Union won the meet on each side respectively.

As usual, the Yeowomen were led by their dominant throws squad, which features three All-Americans, including shot put national champion and senior Monique Newton. Newton won her signature event by nearly four feet with a toss of 14.46 meters, and also placed third in the weight throw. Senior Ana Richardson, who was second in weight, and sophomore Naeisha McClain, who was third in shot, each added podium finishes inside the throwing circle. The five Oberlin throwers at the meet earned 38 points altogether, accounting for over half of the team’s total. This elite group was recently ranked the best throwing unit in the country by the National Coaches Association, and will continue to make its presence felt at future meets.

“Our performances this past weekend were another step in the right direction. Each day we’re getting closer and closer to where we want to be at conference,” Newton said. “There’s no way I would be where I am today without [my teammates] pushing me every day. We each have our strengths and weaknesses. We do a great job of pushing each other in practice.”

On the track, the lone individual championship came courtesy of senior Lilah Drafts-Johnson, who bested the field in the 400m with a time of 58.65. Running her first 400 since suffering a hamstring injury in December, the All-American had enough in the tank to hold off a spirited challenge from a Heidelberg runner, dipping at the line to win by just 0.01 seconds. Going forward, Drafts-Johnson will look to defend her conference title in this event before turning her attention to the 400m hurdles during the outdoor season.

Other strong performances came from junior Imani Cook-Gist, who finished third in the 60m; sophomore Grace Finney, who finished sixth in the pole vault; and sophomore Shannon Wargo, who was fourth in the mile. Wargo is the defending North Coast Athletic Conference champion in the mile and qualified for nationals in the 1500m outdoors. Saturday was a return to form for the runner, who put herself in contention to win until late in the race, and her time of 5:09.58 was an improvement on her time at this meet last year. Wargo looks poised to lead the formidable Yeowomen distance squad into the conference meet at Wabash in three weeks.

The Yeomen took a smaller squad down to Otterbein. The nine of us who made the trip were led by James Tanford, who competed in four events: long jump, triple jump, 400m, and the 4x400m relay. Tanford had a disappointing day in his individual events, falling well short of his standards across the board. Still, he dug deep to deliver the relay’s fastest split, helping the team of himself, Malachi Clemons, John Olsen, and Dylan Rogers to a sixth place finish. However, this quartet has its sights set on bigger goals.

“This is the best and deepest 4×400 team I’ve ever run with,” Tanford said. “We’re currently ranked first in conference and we’re still getting stronger and faster, and I think this relay is going to be a force in our conference for the next few years. We essentially are racing each other in practice every single day, and that kind of constant competition has made us all so much faster.”

Tanford also picked up two points with his seventh-place finish in the triple jump, as did Grant Sheely, who placed seventh in the mile as well. I competed in the 800m, finishing ninth with a time of 2:01.15, which is the fastest I have ever ran indoors, and is just a quarter of a second off my overall personal best. This race was a great opportunity to test myself against a more intense level of competition than we have seen in previous weeks, and the result was an encouraging sign that I am on pace to both achieve my personal goals and be a factor for the team at the conference meet.

I know that many of my teammates have similar perspectives about their performances as well. It is exciting to race at big, competitive meets such as All-Ohio, but the ultimate team standings on both sides are less meaningful than continually progressing throughout the season and being ready to peak at the right time at conference. Generally speaking, that is the only meet where we are overtly concerned about team placing. Regular season meets allow us to chase personal bests and put the pieces together for conference.

The Yeowomen swept the indoor and outdoor championships last year, but Ohio Wesleyan, who placed third on Saturday, is a serious threat. The silver lining of losing to the Battling Bishops could be that it shakes the women’s team out of any sense of complacency about repeating. They will certainly be hungry to prove once again that they are the best team in the conference come March. On the men’s end, we know that we are much stronger than last year, when we were sixth in the NCAC. While Ohio Wesleyan and Wabash have the rest of the conference gapped by a significant margin, we believe that we have the pieces to contend with any other team.

Reflecting on the weekend, Head Coach Ray Appenheimer was optimistic about both teams’ outlooks moving forward.

“I always love watching our student-athletes compete on the biggest stages,” he said. “Regardless of the outcome, what you want to see, particularly indoors, are the student-athletes taking their best shot, making positive, aggressive decisions that have both short and long term benefits. If you have the confidence to do it on the [All-Ohio] stage, when the next, bigger stage comes around, you’ll be even more likely. These are the habits we want to build, and are seeing across event groups this year.”