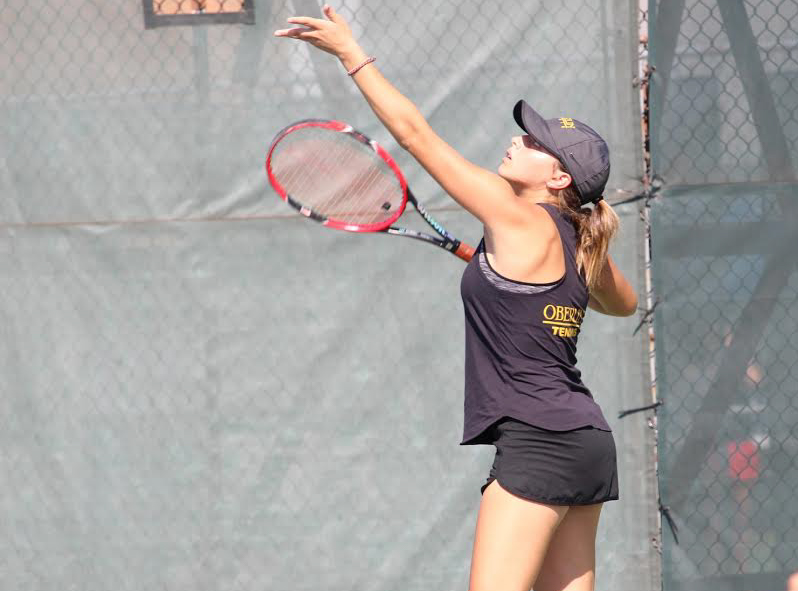 College first-year Maja Shaw Todorovic prepares a serve. The women's tennis team, which is currently 3–3 overall, looks to continue their undefeated play at home tomorrow at 9 a.m. and 4 p.m.

Last week brought starkly different results for the men’s and women’s tennis teams. The Yeowomen earned back-to-back 9–0 wins against the Baldwin Wallace University Yellow Jackets and the Otterbein University Cardinals, while the Yeomen fell to the Case Western Reserve University Spartans and University of Chicago Maroons 1–8 and 0–9, respectively.

“We felt good [going into the matches],” men’s tennis Head Coach Eric Ishida said. “There were definitely some positives to take away… It’s all part of the growing process. We definitely had a wake-up call. It is a high level, and we have a lot of work to do to get there.”

Against Case Western, the Yeomen fell 1–8, but showed a valiant effort during both doubles and singles. Seniors Manickam Manickam and Robert Gittings stole a few points in the doubles matches but ultimately lost 8–4, which was the result for senior Michael Drougas and sophomore Stephen Gruppuso in the second doubles as well. First-year Elliot Nuss saw success in his singles match, where he ousted the competition 6–4, 5–7, and 10–4. His first win would be the sole point for the Yeomen that day.

“[I think] let’s just keep learning and growing and getting better, because this is a long season. We just have to let it sink in and come out with better next time,” Ishida said.

Last Sunday, the Yeomen met a similar outcome against No. 9 ranked University of Chicago. Gittings and Nuss paired up to face the nation’s top-ranked doubles pairing Tyler Raclin and Jeremy Yuan from the Hyde Park University, but were unable to come away with a win. Manickam later drew the ranked competition for his singles match and was able to notch in three games in the two sets, but ultimately fell 6–3 in both. Gruppuso, who sat out in the singles lineup against Case Western, returned to face the Maroons and came away with a 6–2 and 6–1 loss.

The team is not discouraged by the previous week, though. “We are currently 1–6 and we’ve placed five nationally ranked teams,” Ishida said. “I didn’t mean to set the schedule up this way, but when great teams can play I say ‘yes’ and we adjust. But the benefit is that we can see our weaknesses in February and work on them in March and April. I definitely think we’ve been able to raise our level.”

On Friday, the Yeowomen had an electric start to their matchup against Baldwin Wallace, winning all three doubles matches. Sophomore Lena Rich and senior Sarah Hughes’ doubles partnership marked the beginning of the successful weekend, winning their doubles match 8–1. Sophomore Delaney Black in particular brought on the heat, winning both her doubles matches with fellow sophomore Rainie Heck 8–3 and her singles flight in two sets of 6–0 and 6–2. Black, who won North Coast Athletic Conference Player of the Week, was one of five on her team to win their singles matches in only two sets. First-year Maja Shaw Todorovic also enjoyed singles success, yielding no points to her opponent.

“Cheering for each other and having a presence [is something] we are working on,” Rich wrote in an email to the Review. “I would say it’s both a challenge and a positive thing to have so many matches every week because you can’t dwell on the results — good or bad — for too long. During the week in practice, we just really focused in on what we can improve on and [hope] to go from there.”

Against Otterbein, the Yeowomen mirrored their performance in their previous match. Senior Jackie McDermott and Hughes partnered up to win their doubles match 8–1, launching yet another dominating day. Hughes eventually went on to win her singles set-up 6–1 and 6–0, winning in two straight sets. McDermott shone later in the day when she achieved her 90th combined victory by holding her opponent to zero points in both sets of her singles match.

While the numbers on paper make the Yeowomen’s success seem dominating, McDermott is hesitant to refer to the wins as such.

“I don’t think either match was a staggering win,” she said in an email to the Review. “The score would seem like that, but Baldwin Wallace played us really tight and Otterbein played us tight.”

Both women’s and men’s tennis will be facing Centre College tomorrow.