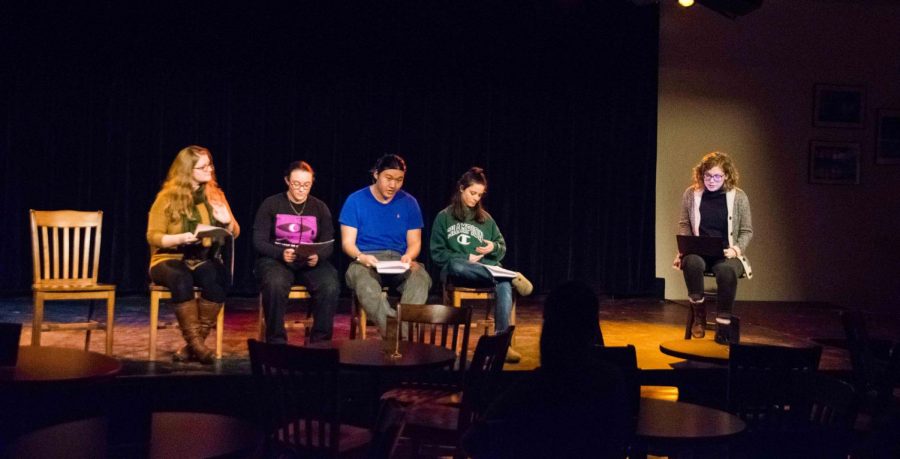 Students present scenes from original student plays written during Winter Term at the Cat in the Cream Sunday night.

A student returns to her room with a body bag, having accidentally killed a professor as a result of her plan to get expelled from school. Divine beings or “winds” commiserate, as they recount their stories of human beings from their heavenly vantage point, or “views from above.” An elderly woman tricks a young volunteer into aiding her to plan a crime, hoping to get caught and incarcerated in order to escape a nursing home.

These are three of the scenes that played out on stage at the Cat in the Cream on Sunday night, in a reading of projects created through Oberlin Student Theater Assocation’s Winter Term Playwriting Workshop.

The brainchild of OSTA co-chair College senior Callie Harlow, College senior Max Freiman, and College sophomore Kathryn Blessington, the Winter Term workshop was designed to provide an opportunity for students who were interested in writing plays or movies to have an outlet for feedback and to set clear goals.

A primary goal of OSTA, according to Harlow, is to provide a resource for theater productions beyond the shows put on by the department.

“If you’re not a theater major or you’re not willing to devote a really significant amount of your time to theater on campus, it [can be] really hard to participate at all,” Harlow said. “I wanted there to be little opportunities for people to act or direct without giving up so much of their time.”

Sunday night’s reading, facilitated by College first-year Emma Wehrman, was their most casual event yet, with actors and writers meeting just an hour before to go over the scenes and talk about what they should look like. After that, the writers were given the invaluable chance to watch pieces of their projects come to life — and the actors were able to practice their craft in a fun, low-stakes setting.

“Working with published playwrights is awesome and we want to continue to do that, but we’d love to have as many student-written plays as possible,” Harlow said of OSTA’s work.

This semester, OSTA will be presenting “Marzipan and Bunko Go to New Jerk City,” a play written by College sophomore Hartley Wise and directed by College junior Jackson Zinn-Rowthorn. But they wanted to facilitate even greater involvement, and the Playwriting Winter Term Workshop was the solution.

“Oberlin has a really fantastic Creative Writing department, but it’s definitely more focused on poetry and prose,” Harlow said. “Even though there are great screenwriting and playwriting classes, they’re hard to get into and they’re kind of designed for upper-level majors.”

After sending out an email last year asking what resources people wanted more of on campus, she and her colleagues realized that holding workshops would help.

“A lot of younger playwrights were interested in having opportunities to write,” Harlow said. “We were excited about having Winter Term be an opportunity for people to have a little bit of structure.”

The workshop was primarily digital so that people could participate from home, away, or on campus. Freiman, who was working on a screenplay himself, facilitated from Oberlin.

“For people who had never written any plays or any type of screenplay, I did a little bit of teaching [of] act structure and characters, how to write properly,” Freiman said. “They joined because they wanted to write a play, so I didn’t have to force them to do anything they didn’t want to do.”

Given varying deadlines, they would meet via Skype, split into small groups, read work out loud, and give feedback.

“Having those weekly meetings makes such a big difference,” Harlow reflected. “If you have all of January to write, that’s such a vague goal.”

For Henke, who detailed the story of an accidentally-murderous college student, writing a play turned out to be a much easier goal than she’d expected — especially given a diverse circle of peers to help her out.

“Honestly, I’d wanted to try writing a play for so long, and all I had to do was sit down to make it happen,” Henke wrote in an email to the Review. “I think if I had known how doable it would be and how supportive other people would be, I would’ve written a play much sooner.”

The workshop allowed Blessington to test a bold new idea and come away with a two-act play. She both wrote the play — which centers on a zany old woman trying to escape her senior home by going to prison — and helped organize the event on campus.

“It was a challenging task, but I learned a lot from it,” Blessington said in an email to the Review. “It’s known that you have to fail first to succeed, and the OSTA playwriting group gives you the chance to try without worrying about the result being great.”