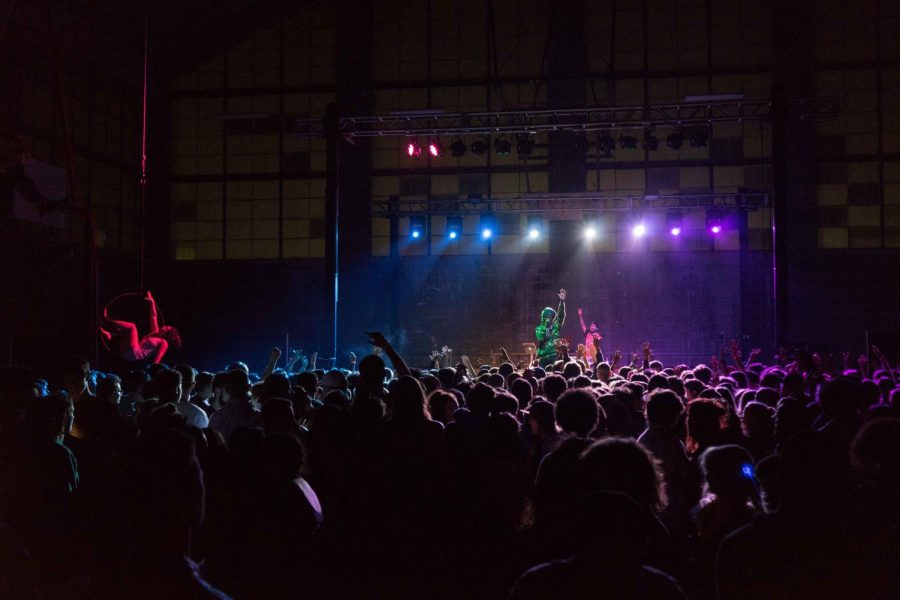 A “Wasteland” themed Solarity in November 2017. A new campus group, the Oberlin Bystander Initiative, will be sending trained bystanders to parties and campus events where there could be alcohol or other substances to ensure students’ safety.

The Oberlin Bystander Intervention Program, which aims to train students to be active bystanders at large events as well as educate about substance abuse safety measures, becomes fully operational this semester.

“I think Kirsten and I both wanted a project to do, just because we felt like Student Senate is most effective when there are little task forces,” Johnson said.

The working group found examples of intervention measures at other universities in the hopes that similar ideas could be used at Oberlin.

“The whole concept of OBI had come out of a student government conference I went to my second semester freshman year,” Mojziszek said. “There [were] different topic conversation rooms, and I went to one that was about sexual assault on campus and like, what are students doing and what can we do more.”

At the conference, Mojziszek learned about Denison University’s Sexual Harassment and Assault Resources and Education program. SHARE is a student organization that offers confidential support to sexual misconduct survivors at Denison.

“What [Denison] had — it was very similar to the [Sexual Harm Information Liaison] that we have with [the Oberlin Student Cooperative Assocciation] — and it was this confidential student resource and advocate, and that was something I really wanted to bring here to make it more widespread,” Mojziszek said.

Aspects of SHARE’s program could not be replicated, however, due to issues with confidentiality, according to Mojziszek. Johnson added that OBI’s status as an institutional program has limited some of its functions.

“One of the things we wanted to implement was having students at parties which we couldn’t do due to legal things, just because that would mean the school would recognize that there were parties where there is underage drinking, versus us being at the ’Sco,” Johnson said.

OBI was originally affiliated with the Office of Title IX, but has since moved to the College’s Center for Student Success. Director of Health Promotion for Students and Assistant Dean of Students Edward Gisemba is OBI’s new supervisor. She said she aims to direct OBI to more substance-oriented education measures.

“I was approached by Kirsten [Mojziszek] as a student org to help staff better address situations in which alcohol was being used,” Gisemba said. “So [OBI] worked directly with staff at the ’Sco — they provided water bottles and things like that to students to try to better manage their alcohol use.”

OBI’s platform has shifted to focus more on substance abuse than sexual misconduct and to aim for education more than implementing bystanders. Voluntary workshops will be offered to students.

“PRSM has a couple of workshops for [substance abuse], but that’s not what they focus on, because they have responsibilities with making sure they do the bystander training and that it happens for all of the first-years that come through,” Mojziszek said. “We’re just trying to offer extra opportunities for it to happen later in the year.”

The emphasis on education emerged in the hopes that students will use what they have learned to become active bystanders themselves in social situations, both to increase the overall feeling of safety and also to lessen the demand on OBI volunteers. According to Gisemba, an average of possibly five OBI bystanders could be expected at each ’Sco event.

For a space that, according to the ’Sco’s website, has a room capacity of 450 people, the task at hand for bystanders can be daunting.

“It’s a lot of physical and emotional work to be a bystander,” Mojziszek said.

While being a bystander for OBI is currently a voluntary position, Mojziszek and Johnson agree that finding resources to pay bystanders is a priority.

“I think it’s really important to pay people for the labor they do, and in this case, we want everyone to be bystanders, but on top of that it ensures a different level of safety and care that is around the campus,” Johnson said.

In the future, OBI intends to expand its education on alcohol and misconduct to include other substances, as well.

“Folks in student affairs pride themselves in providing this education outside of the classroom,” Gisemba said. “But thinking about health in college…is understated in its importance.”

Applications to be a bystander for OBI are still open on a rolling basis.