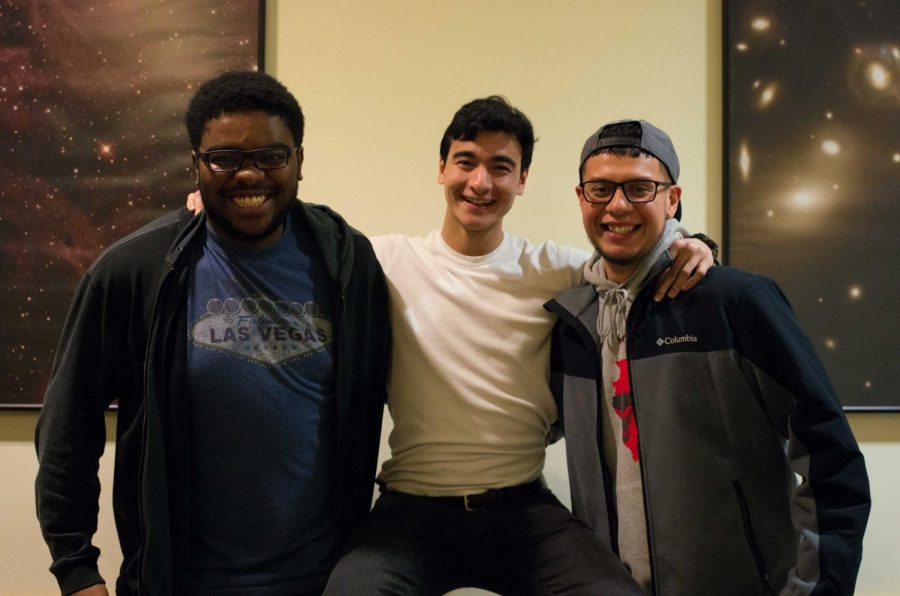 College seniors Matt Sarro and Brian Cabral and junior Sam Paul all came to Oberlin without any experience playing rugby, but the trio has found a love for the sport and formed a brotherhood after joining Oberlin’s club team. The team — which has no coach — schedules its own games and practices. They play six games in the fall and compete against teams of their choice in the spring. Their first open practice is Monday at 4:30 p.m. on North Quad, weather permitting. Anyone interested is welcome.

How and when did you get involved with rugby? What are your roles on the team?

Matt Sarro: I didn’t play rugby in high school — I wrestled in high school, and Oberlin didn’t have a wrestling team. During orientation week [the rugby team] had an open field practice, and I enjoyed it. It was a relatively easy transition for me going from wrestling to rugby. I’m president [of the team], so I guess that’s coordinating administration, any outside emails that come from people who want to sponsor us or reach out to us, and organizing games with other teams.

Sam Paul: Like Matt, I came to this school not playing a single second of rugby. In fact, I didn’t play sports at all in high school, so I came here and was like, “Well, my size should be for football,” but I had never touched a football before in an actual game, so I thought I would just go to the club sports fair. The first thing I did was go up to the men’s rugby team and say, “Is this where I sign up to play?” Our captain that year was just like, “Yes, absolutely. Come sign up.” I’ve been playing ever since. It’s been a good time. Right now, I’m captain of the forwards and am also Matt’s secretary, so I’m scheduling the games this spring. I contact the refs — all that stuff.

Brian Cabral: I joined the rugby team my first year, second semester. I’ve been on and off because I just have a lot going on with other clubs and other memberships that I have on campus. This year I am the rugby social chair, [which involves] building community with other club teams and varsity teams; it’s an outreach position. I was reached out to [during] my first semester [at Oberlin], and I initially rejected it. I think after my first semester I realized I needed a community and sense of brotherhood that I had in high school, because I played football and basketball. I didn’t want to play varsity sports because all these people have had years of training, so I thought, “OK, let me try out rugby.” It wasn’t that hard to get the rules down, but in my first game, I didn’t know what to do, and my teammates were like, “Just go after the dude with the ball.” There was a moment that spring semester where I had the seniors back me up; I was tackled horribly, and one of the seniors picked me up and was like, “I’m going to get the guy.” He tackled the f**k out of the guy. For me, it was just where I belonged. We help each other on and off the pitch.

How do you go about recruiting, considering many of your athletes join the team with little to no experience?

MS: During orientation week we reach out. We tell people interested, “Just come to an open practice. See if you like it — if you don’t, that’s fine. Just try it out.” One thing we have to deal with is the stigma of rugby, which is getting hit hard. Honestly, it’s not as bad as you’d expect.

How many people are typically on the team?

MS: It varies. In the fall, there’s usually 15 per side, and in the spring there’s usually seven. In past years, we’ve had 20–30 people on the team. That number has declined, but we’ve had more people showing up to practice.

What does a season look like — how many games, who do you play, etc.?

SP: In terms of what the season usually looks like in the fall, we tend to get about six games in a season. In past years, we’ve been in the Ohio Central Division, so we’ve played teams like Denison [University], Ohio Wesleyan [University], Ashland [University], and Kenyon [College]. This past year they switched us to the Northeast Division, so we play Akron [University], Case Western [University], and John Carroll [University]. In the spring we get to choose whoever we want to play, so it’s usually teams we’ve had in the fall if we liked playing with them and they’re nice kids. In terms of practices, in the fall we usually try to hold practices three times a week, just so we give people the opportunity to show up to at least two of them. In the spring, it’s a little different because of the rotating field house times and the fact that the varsity sports practice indoors, so we practice about once or twice a week.

BC: We try to stay united and build cohesion among us with workouts, because we self-schedule our workouts — so we can’t get the whole team together for a specific session. The three of us will go work out together, then three other people will work out together, depending on schedules. We do a lot of community building — hanging out a lot.

MS: It’s incredibly inclusive. If you want to join, please join. Rugby is technically the fastest growing sport in the U.S. We want more people to play and learn about the game. We enjoy it a lot and like to share that.

SP: It’s a lot more laid-back too, mainly because it’s a club sport. We want people to show up to practice and games, but we’re also not the ones who say, “Well, you didn’t show up to X, Y, Z — you can’t come to this next event.” We want to include as many people as we can — come to practice because they want to, not because we make them.

Do you hope to see rugby become a varsity sport? Or do you prefer it to stay club?

MS: We like the laid-back atmosphere. When you’re on the field, you definitely try to beat the living daylights out of other teams, but when it’s over, it’s tradition to socialize with the other team. So you get together and say, “Hey, that was a nice hit.” And then we’ll sing songs together.

What’s on the horizon for you all?

SP: Right now, because we’re communicating with other teams and aren’t on a league-based schedule, we still aren’t positive what our total number of games will be or who we will play. But we do know for sure that we will be playing two teams who reached out to us. Denison wants to play us on April 21. We’ve been trying to get them to come to Oberlin for the past like five years. Akron responded to us, and so we’ll probably play them on [April] 28 — April will probably be stacked with games and events. MS: We’re finally looking to get a coach or an authority figure of sorts, which is an incentive for more people to come out to practice.

BC: It’ll add a ton of structure to our team as well, in terms of backs and forwards, because that’s how we divide our team in practices sometimes.

Do people generally come to games?

BC: Yeah, definitely. People show up. We make Facebook events, spread the word, and tell people, “If you care, you should show up.” And they do. We’ve had administrators, teachers, professors and stuff come.

What are your best selling points for why people should join?

MS: It’s fun, and it’s not like any other sport you’ve played before, most likely. It tends to combine a bunch of sports. It’s soccer and football put together, and it’s non-stop. In football, if you get tackled, the play stops and you have to restart the clock. If you get tackled in rugby, you don’t. It’s high-intensity and a lot of fun.

BC: We really try to push a sense of brotherhood. We’re here not just as your teammates, but as colleagues. We’re there for each other even outside of Oberlin.

SP: I made 20 new friends instantly when I showed up. I didn’t know any of them and they were older than me, but I showed up and immediately felt accepted into the rugby family.