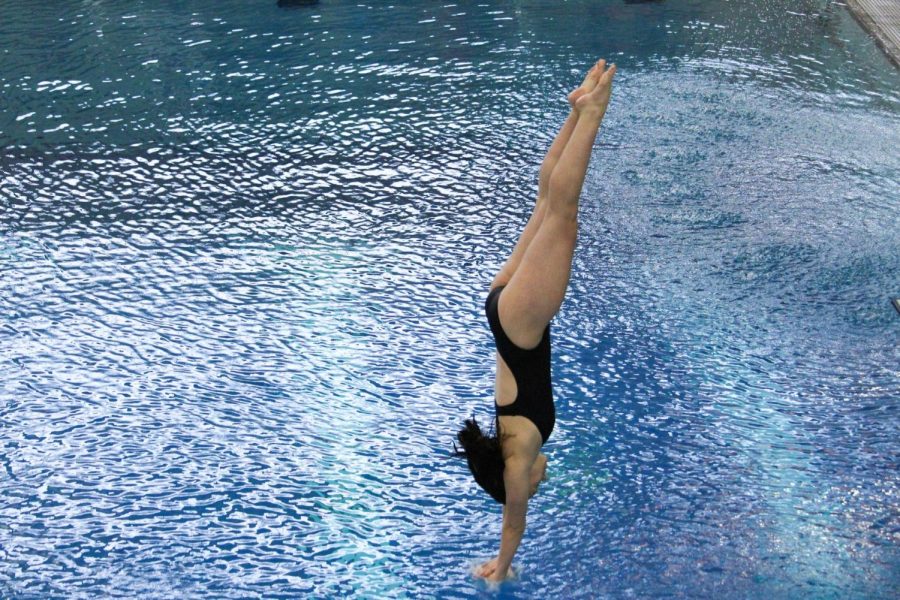 College senior Rachael Andrews dives her way to an eighth-place finish in the three-meter diving at the NCAC Swimming and Diving Championships last week.

The swimming and diving teams travelled to Denison University last week to compete at the four-day-long North Coast Athletic Conference championships. At the end of the grueling competition, the Yeowomen finished seventh out of nine teams with 584 points and the Yeomen placed eighth out of ten teams with 430 points. Denison University and Kenyon College — widely regarded as two of the three best programs in all of Division III — battled for the victory on both sides, with the Denison men’s team and the Kenyon women’s team ultimately coming out on top.

Head Coach Andrew Brabson said he was satisfied with teams’ efforts throughout the competition.

“Overall, I was quite pleased with the team’s performance,” Brabson said. “We ended up with around 50 personal bests, 17 all-time top ten performances, and three school records. I was happy to see everyone keep the energy up and support each other through the duration of the meet.”

The Yeowomen were keyed all week by the efforts of standout first-year Tesla Waters. Waters set school records in both the 50-yard freestyle (23.85 seconds) and the 100-yard Individual Medley (59.97) over the course of the competition, finishing ninth in each event. She also took part in the 100-yard butterfly and swam three relays, including the 400-yard freestyle relay, where she set a third school record with her leadoff split of 52.06. The team of Waters, first-year Jillian Jaczkowski, and sophomores Alex Grande and Sarah Dalgleish placed fifth overall.

Other strong performances came from first-year Molly Marshall, who finished 12th in the 200-yard IM and eighth in the 400-yard IM, recording the fifth-fastest time in school history in the latter event with a mark of 4:41.69. Junior captain Rachel Poyle singled out Marshall’s efforts in particular for praise.

“Coming into our conference as a [first-year] is really daunting, because you’ll have national champions in the lanes next to you,” Poyle said. “It can be really nerve-wracking to have to compete with that, but Molly totally took it in stride. She had some pretty big time drops in her races and it was super exciting to see because she worked so incredibly hard the entire season.”

First-year Ellisa Lang added a 13th place finish in the 200-yard butterfly, also entering Oberlin’s all-time top ten list. On the diving board, senior Rachael Andrews led the way, placing eighth in the three-meter dive and 11th in the one-meter dive. Poyle revealed that Andrews had dislocated her knee shortly before the meet, making her appearance in the finals of the three-meter event even more impressive.

For the Yeomen, sophomore Michael Lin provided a pair of the team’s top performances, placing ninth in the 200-yard breaststroke and 14th in the 100-yard breast-stroke. Fellow sophomore Kristoph Naggert competed in both of those events as well, placing 15th and 18th, respectively. First-year Farzad Sarkari had a strong competition, with career best times in both the 1650- and 500-yard freestyle events, placing 16th and 23rd in those races. The Yeomen also fielded numerous relays, including the 800-yard freestyle, where the team of Naggert, Sarkari, and sophomores Jack McKeown and Matthew Berry finished seventh. Sophomore Duncan Reid, who finished 17th in the 1650-yard free, was pleased with his team’s results.

“I thought we did well,” Reid said. “We’re not the largest team in the meet, but we held our own against the other schools in the conference. I think our breaststroke corps did well, and Farzad swam strong in his events.”

Both teams will compete a final time at Kenyon tomorrow, which will cap off this uniquely challenging season where the team did not have access to a pool facility on campus, due to ongoing renovations of Philips gym and Carr Pool. While commuting to Splash Zone at odd hours and having to coexist with numerous high school teams was a considerable inconvenience all year, the athletes did not allow this obstacle to slow down their training.

“Although our training conditions were difficult this season, the team bonded around these hardships and made the most it,” Brabson said. “Going through a common struggle can certainly galvanize a team and I believe our conference meet performance was a direct result of that.”

Poyle, one of the oldest members on the modestly sized team, wasn’t happy with the challenge but was impressed with how her team handled such a bizarre practicing routine.

“Having to wake up 30 minutes earlier and shuttle to a pool that isn’t ours and that is maintained and catered towards geriatric recreation more than college-level competition isn’t ideal and isn’t fun,” Poyle said. “But we made it, and we’ll have an absolutely beautiful, functional facility for next season, and that makes it all worth it.”

With just two seniors combined on both rosters, and the talents of newcomers such as Waters and Marshall, both squads look poised to continue improving and rise through the conference ranks in the coming years.

“The fact that we had so many underclassmen scoring highly and making strong contributions certainly bodes well for the future of our program,” Brabson said. “I think our first-years gained a lot of experience this season and will come back even stronger and more confident next year.”