Council Votes to Settle with NEXUS 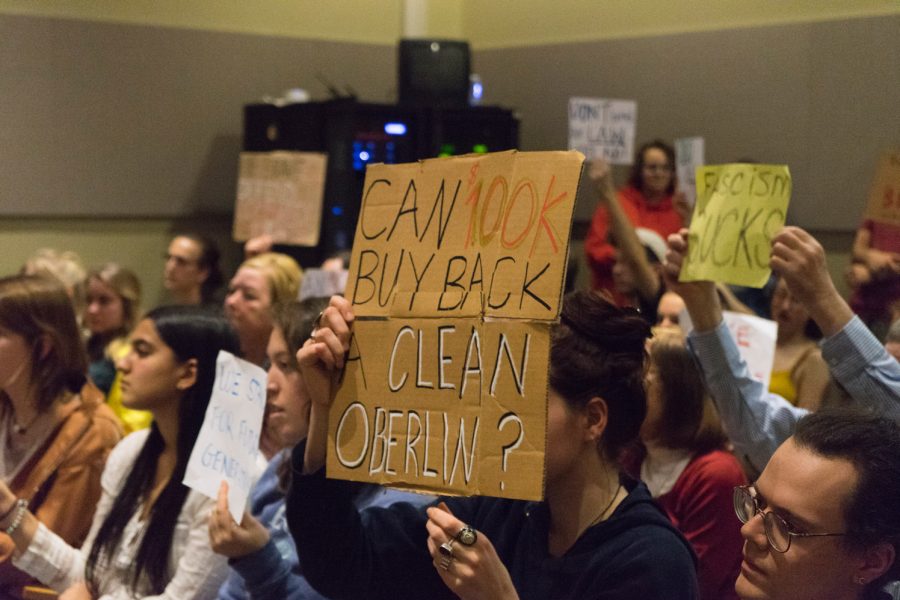 Tuesday’s City Council meeting, where more than 60 students and community members stood chanting to protest the city’s vote to settle with NEXUS over the incoming pipeline.

“They’re breaking our laws, they’re taking our rights, but we won’t give up without a fight,” chanted the more than 60 Oberlin students and community members who protested during Tuesday’s City Council meeting. Councilmembers voted 4–3 to move forward with a potential $100,000 settlement with Enbridge, the company set to build the NEXUS pipeline.

After nearly an hour of public comments asking Council to oppose the agreement, the ordinance authorizing the city manager to execute the settlement agreement with Enbridge will now move to a third reading. A majority vote on the third reading would pass the ordinance.

Councilmembers Linda Slocum, Heather Adelman, and Sharon Pearson were the three dissenting votes in the second reading of the settlement agreement. Both Adelman and Slocum voted against the agreement in the first reading at the Council’s Feb. 5 meeting. Pearson, who was out of town Feb. 5, did not vote on the first reading and addressed the public to explain her vote.

“I never thought that we would be at this point,” Pearson said, adding that the settlement “feels just kind of dirty, and it’s something that I am not willing or ready to be able to accept.”

In exchange for the payment, the settlement dictates that the city cannot engage in any further litigation intended to interfere with construction of the pipeline and grants full easement rights to NEXUS.

A grant of easement would give NEXUS the legal rights to build the pipeline on city-owned land. NEXUS has proposed construction of a natural gas pipeline through a 50-foot section of land in the southernmost part of Oberlin. The city of Oberlin has engaged in litigation opposing this construction since December 2015.

The city of Green, Ohio, another city fighting the pipeline, recently settled with Enbridge for $7.5 million.

Council President Bryan Burgess, who has been particulalry active in the fight against NEXUS, said he has a responsibility to settle, for the good of the community.

“We could do a lot with $100,000; … I think it’s a position of privilege to say we don’t care about the money — it’s only about the principle,” Burgess said. “I have to look out for the welfare of the entire community.”

A number of students and community members were allowed to speak at the meeting, including College first-year Gayla Wolcott, who responded directly to Burgess’s comment.

Oberlin’s Community Bill of Rights and Obligations, is often invoked by legislators and citizens alike as a reason to oppose the pipeline’s construction. The ordinance was voted on by citizens and passed in 2013 to affirm the authority of the people of Oberlin to govern their own community in relation to the oil and gas industry.

“The voters wanted the city to adopt a law saying that they wouldn’t allow any … fossil fuel infrastructure in the city,” said College junior Cecilia Wallace. “So City Council taking a settlement is a really clear statement saying that they don’t take the laws that they passed very seriously.”

At Tuesday’s Council meeting, many Oberlin residents and students referenced the Community Bill of Rights in their comments. Others spoke about Oberlin’s history of progressivism and position within a greater movement against the fossil fuel industry. Many attendees held signs in protest, with phrases like “Be brave,” “We’re better than this,” and “Fascism sucks.”

When roll was about to be called for the vote, members of the public, including members of the College organization Students for Energy Justice, stood and began chanting, “City Council, stand with us, defend CBR, no NEXUS.”